Peel is warming twice as fast as the global average; how will a strained health system handle a population made increasingly sick by climate change?

By: Rachel Morgan, The Pointer

Emergency rooms, ICUs and inpatient beds in hospitals across Ontario are overflowing. Throughout late summer and the fall, disturbing stories of shuttered ERs, paramedics driving hours to assist overburdened departments in other jurisdictions and patients being transferred hundreds of kilometres for surgery, have been heard across the province.

In Eastern Ontario, due to staffing shortages, the Glengarry Memorial Hospital in

In Southwestern Ontario, in mid-October, the children’s hospital at London Health Sciences Centre had to transfer patients in need of an ICU bed outside the region due to overwhelmed capacity.

In Central Ontario, Bowmanville Hospital closed its ER in mid-July due to a lack of staff to handle the waves of patients in need of care; SickKids Hospital’s intensive care unit reached full capacity in early October.

The COVID-19 pandemic exposed the dire need to invest significant dollars to ensure the healthcare system is prepared for the next major medical threat. Due to our growing population—it crossed the 8-billion mark, globally, this month—and our rapidly warming climate—the past eight years collectively are the warmest ever recorded, going back almost 150 years—it’s not a matter of if, but when the next catastrophic impact to our collective well being arrives.

NASA’s temperature record shows us that Earth in 2021 was about 1.9 degrees Fahrenheit (1.1 degrees Celsius) warmer than the average temperature 150 years ago, at the beginning of the industrial revolution.

If we cross the 1.5 degree Celsius threshold, the Earth will enter uncharted territory.

Science, however, can predict where we’re headed. And it’s not good.

A new study from the science journal The Lancet, underscores how the warming planet will not only increase the spread of sickness and disease, but how these bouts of sickness will not arrive alone but often in groups, something known as coepidemics.

The Lancet study found that when comparing two four-year periods—2000 to 2004 and 2017 to 2021—the number of heat related deaths increased 68 percent.

Historically, Canada’s harsh winters were pretty adept at freezing those little things in our natural world that can make someone sick. Think mosquitos or ticks. But as our climate warms, and the seasonal temperature in Canada’s northern latitudes increases, the Great White North becomes much more inviting for certain pests and the deadly sicknesses they carry.

The first case of West Nile Virus was identified in Canada in 2002, and it has since become endemic in the country, fuelled in part by climate change. The Region of Peel identified the season’s first West Nile Virus positive mosquitoes on August 9. 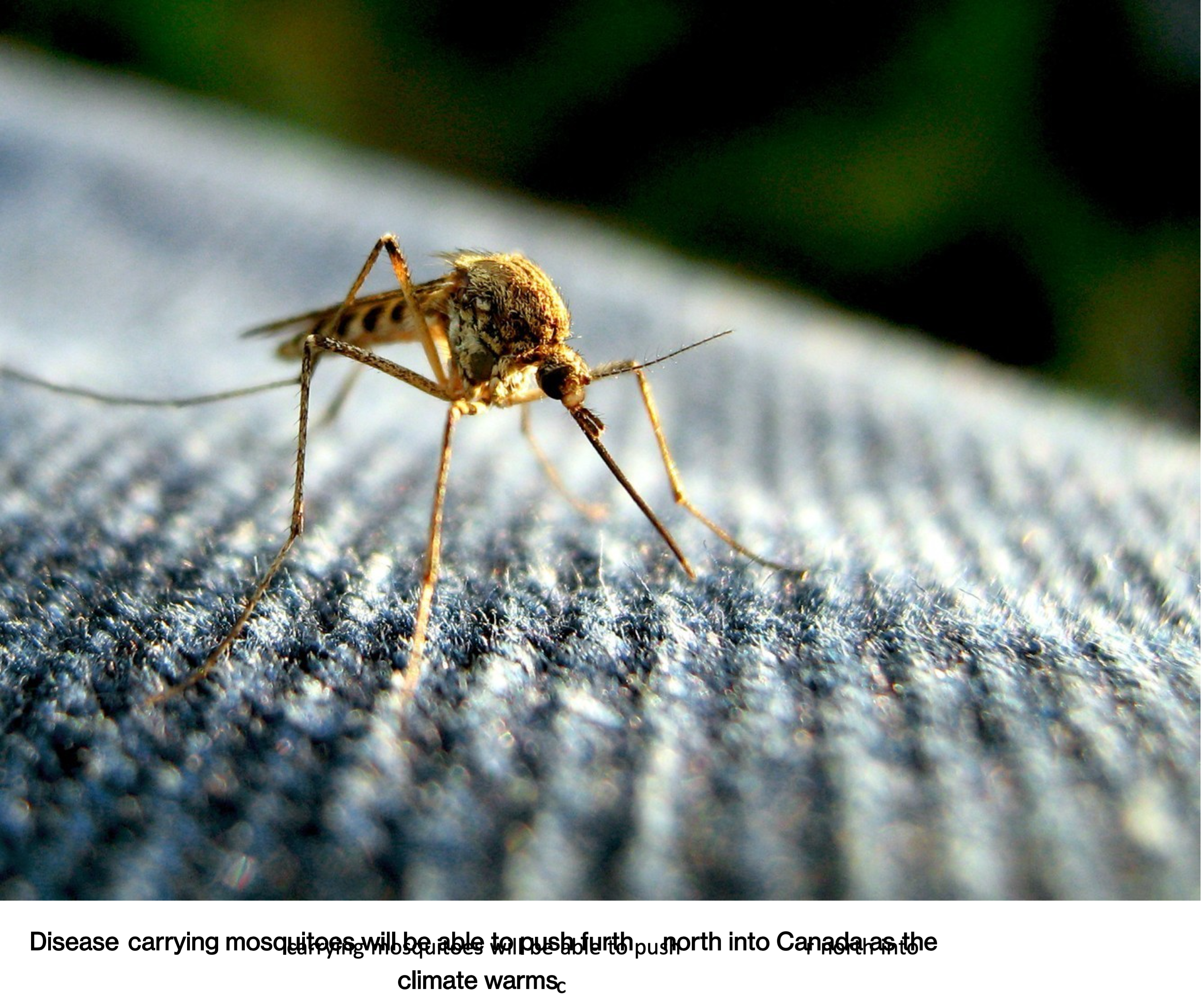 West Nile Virus isn’t the only microscopic threat Canadians need to be wary of. With increasing temperatures, there is the potential for other mosquito borne diseases (MBDs) and tick borne diseases (TBD) to become prevalent.

Zika, Chikungunya, Dengue, Yellow Fever and Malaria are all MBDs that we hear about across the globe. While they may seem far off, it is possible for these diseases to encroach further north as temperatures warm.

Canada already has the vector that can carry malaria. The disease, which can lead to kidney failure, seizures, coma and death, was endemic in Canada during the 19th and 20th centuries and was eradicated in the 1950s with the use of DDT and other chemical pesticides to control the mosquito population. Even though malaria was eradicated, the Anopheles mosquito is still buzzing around. 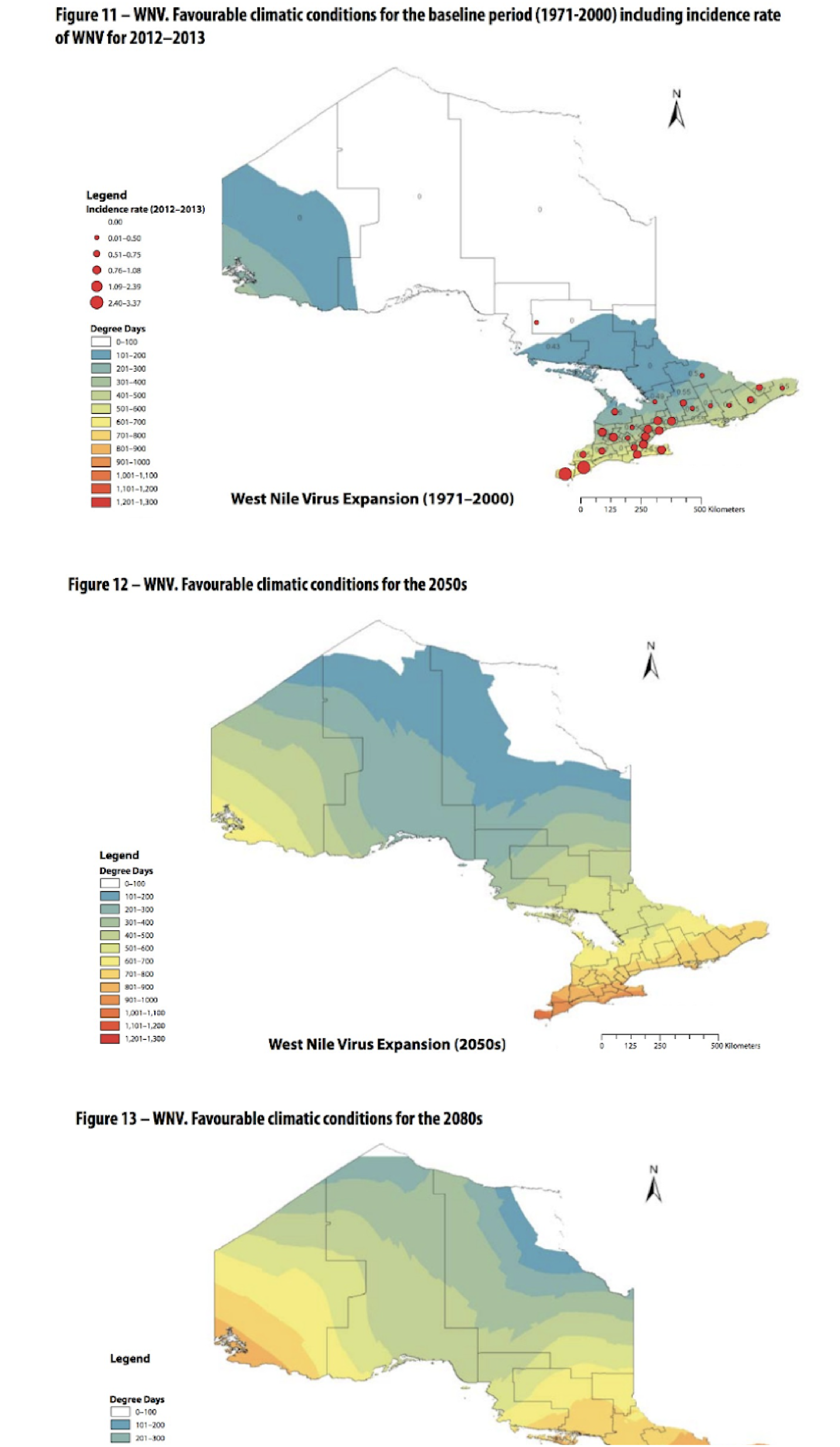 Climate change is likely to result in shorter winters and longer summers in southern Ontario prolonging the chances of being infected with one of these diseases. An earlier onset of spring would prolong the amplification cycle resulting in an increased incidence of human infection of West Nile Virus. In addition, ticks are active from when the snow melts to when there is snow on the ground, again increasing the chances of contracting Lyme disease.

These impacts could be particularly harsh in Peel, which is warming at twice the rate of the global average. There are a number of contributing factors: between 2015 and 2019 carbon emissions from cars and trucks in Peel increased 10 percent, well above the Ontario average; rapid population increase over the last three decades has led to a much higher overall carbon footprint that impacts the local airshed; the natural cooling qualities of surface areas have been replaced by heat-trapping pavement; and heat mitigation features such as tree canopies are not as abundant as they should be.

With an already strained healthcare system—there is only a single full-service hospital in Brampton—Peel’s unique climate profile, and its impacts on public health, are particularly concerning.

In April 2021, the Credit Valley Conservation Authority (CVC), which is responsible for maintaining watersheds that cover a large portion of the region, put out findings from its integrated watershed monitoring program. Across its jurisdiction, the CVC reported an average annual temperature increase of 1.8 degrees since 1940 — this is about double the rate of warming that has happened globally. This means that certain negative effects from the warming planet — more extreme heat days, more extreme weather events like flooding — could be seen in Peel quicker and more prominently than other areas in years to come, although many severe weather events are part of large systems that impact broad geographic areas.

The watershed study also observed a total annual precipitation increase between 6 and 23 percent, and 13 percent more precipitation in winter months that do not include snow.

The most prominent warming in Peel happened over the past three decades and if not blunted, could result in local temperatures rising another two degrees, according to the CVC data.

“The ticks have moved remarkably quickly, quite predictably north, into Canada from the US, because the climate has warmed and made the environment suitable for the ticks,” said Dr. Nicholos Ogden, a Senior Research Scientist at Health Canada.

Longer and warmer summers not only increase the survival rate, growth and reproduction of vectors such as ticks, but they also increase the length of time the vectors are active in the environment. Since humans tend to be more active outdoors during the warm weather as well, there is a greater chance of coming into contact with these vector-borne diseases.

As cities sprawl further into previously natural spaces, these interactions between human and infected vectors will become more common.

A study published in the journal Nature Climate Change in August attempted to get a handle on just how impactful the warming planet has been on the spread of pathogenic diseases. It found that a wide array of “climatic hazards” (heatwaves, droughts, wildfires, extreme rain and flooding) are linked to the spread of disease and that 58 percent of infectious diseases faced by humanity across the globe have, at some point, been aggravated by these hazards. However, understanding specific causal factors is extremely difficult, the study admits, due to the wide array of interactions between people and the environment, so, in turn, it is challenging for society to adapt quick enough to respond.

“The human pathogenic diseases and transmission pathways aggravated by climatic hazards are too numerous for comprehensive societal adaptations,” the study states, adding this highlights “the urgent need to work at the source of the problem: reducing GHG emissions.”

Peel Public Health has made it a strategic priority to limit the impacts climate change has on residents.

“A changing climate will impact human health through increasing temperature-related morbidity and mortality; intensifying the harmful effects of poor air quality; increasing the risk of injury and loss of life from extreme weather; increasing illness through food and water contamination, as well as vector-borne disease (e.g. disease carried by mosquitoes and ticks); increasing stress and harming mental health; and displacing communities (e.g. due to flooding),” reads the plan.

But the work of public health can not be done in a silo.

If the Region hopes to limit the strain on its healthcare system caused by global warming, focusing on reducing greenhouse gas emissions must be a priority as well.

“We are in the fight of our lives. And we are losing,” Antonio Guterres, the Secretary

General of the United Nations told the high-level opening of COP27—the United Nations climate change conference that wrapped up November 18. “Global temperatures keep rising.  And our planet is fast approaching tipping points that will make climate chaos irreversible. We are on a highway to climate hell with our foot is still on the accelerator.”

This year the federal government, led by Health Canada, released a sweeping report that links the “climate hell” scenario to the health risks it will bring.

It highlights what armies of scientists are exhorting governments to pay attention to.

“The current burden of mental ill health in Canada is likely to rise as a result of climate change. Disruptions to food systems and water resources; worsening of air pollution; the emergence and re-emergence of climate sensitive infectious diseases; and increasing demands on health systems will continue to threaten Canadians’ health.” We have all seen how the COVID-19 pandemic continues to batter our under-funded healthcare system. Climate change could make these current impacts look like a walk in the park.