By: Lily Huang, The Charlatan 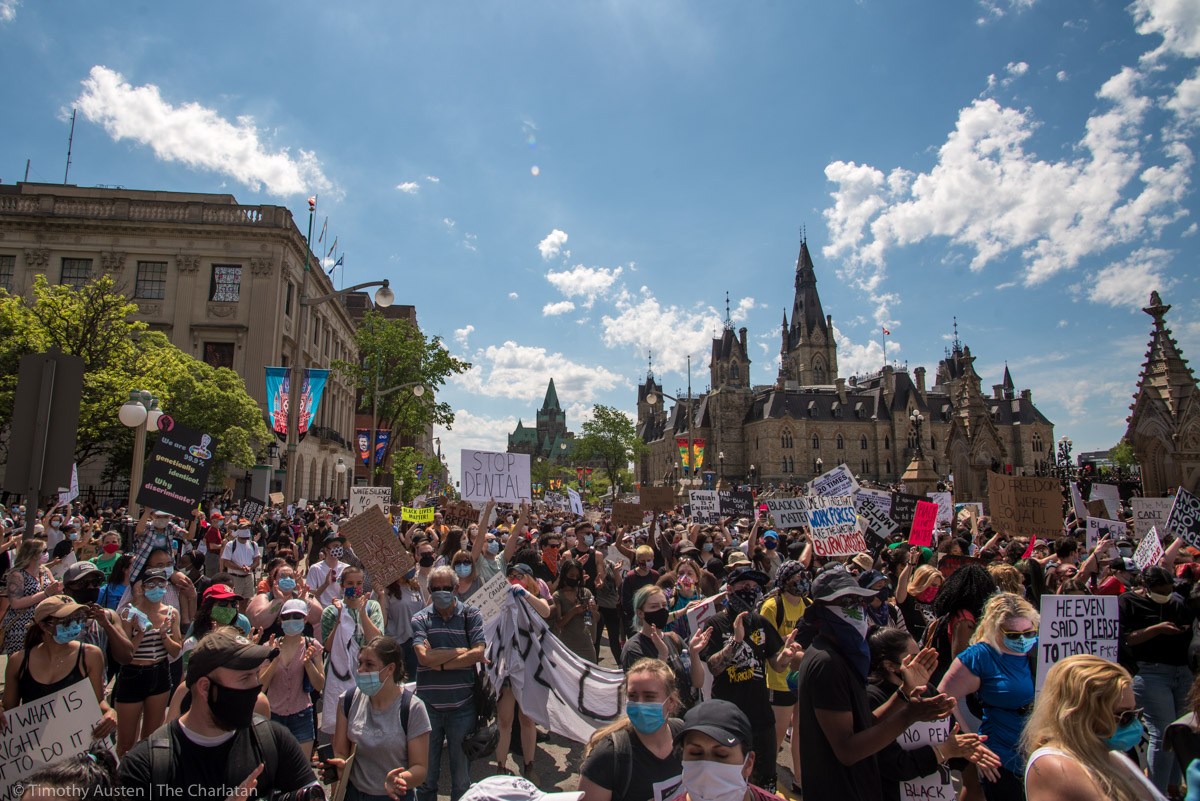 Protestors gather on Wellington street in front of Parliament for the protest. [Photo by Tim Austen]

Anti-Black racism is a systemic issue that affects all facets of life for the Black community, including their health. Several organizations in Canada declared anti-Black racism a public health crisis within the last month.

Groups that declared the crisis include the Toronto City Council, the Canadian Union of Public Employees, and organizations such as the Ontario Health Coalition and the Alliance for Healthier Communities — both of which are non-profits that strive to influence the Ontario government to implement health equity policies.

According to Suzanne Obiorah, a member of the Alliance for Healthier Communities and Director of Primary Care at Somerset West Community Centre, anti-Black racism in healthcare is not a new phenomenon.

“Recent events around the deaths of some members in our Black community — Regis Korchinski-Paquet, George Floyd, […] has heightened everyone’s attention around the impacts of anti-Black racism,” Obiorah said.

Police brutality not only harms the physical health of the Black community but also their mental health.

Temi Olawoye, a second-year global and international studies student at Carleton, wrote in an email that the anxiety levels of Black parents often rise when teaching children about police brutality.

“No matter a Black person’s success or social status, a cloud of anxiousness hangs around as a result of our skin.”

A report from the Ontario Human Rights Commission found that between 2013 and 2017, a Black person in Toronto was approximately 20 times more likely than a White person to be involved in a fatal shooting with police. The commission spoke directly to 130 Black Canadians and their lived experiences with the Toronto Police Service resulted in “fear, trauma, humiliation, mistrust, and expectations of negative treatment by police.”

“If one has an imbalance compared to the other, then it creates a backlash effect and it creates an even more detrimental effect to the victim, which in this case are racialized people,” she said.

A Health Canada report on access to health services in racialized communities found that “systemic discrimination within the health care institutions and lack of culturally sensitive services for the community” is a barrier Black Canadians face. It added that this can cause stress which leads to mental illness.

The report from Health Canada also found that “many health institutions seem to lack information on the cultural and racial characteristics of the population in their service area.”

Akinwande said that although these rights should be guaranteed, they are not always visible.

Obiorah explained that various community consultations found that many Black Canadians receive different healthcare from those who are not racialized. Some people have reported not being given cancer screenings, being treated as drug seekers when they are suffering from sickle cell anemia, and being turned away or neglected for treatment of their mental illness.

“When we think about public health or health issues, and factors you can modify such as eating well, or exercise, or getting social service supports to help with finances, these are things you can modify, but you cannot modify your race,” Obiorah said. “So what you have to modify is society’s interactions with racialized groups.”

Other members of the Black community at Carleton also spoke out about the racial injustices present in Canada’s healthcare system.

“To pick and choose which person gets the most attention or gets the most support is discriminatory and it’s against a lot of those values that Canadians uphold within themselves,” Akinwande said.

Akinwande explained that she had a racist experience at a doctor’s office when she was 18 years old.

“That was the first time I was discriminated against or [had an assumption made about me] for my background,” Akinwande said.

Systemic racism in Canada’s healthcare system has been emphasized during the COVID-19 pandemic.

Christine Elliot, Ontario’s Deputy Premier and Minister of Health, said that racialized Ontarians with lower incomes are at a greater risk of COVID-19 infection.

According to a press release from the Ministry of Health, the Ontario government is proposing all health units to collect data on race, income, language, and household size for individuals who have tested positive for COVID-19.

A fact sheet released by the Ontario Council of Agencies Serving Immigrants found that 20.8 per cent of people of colour in Canada are low-income compared to 12.2 per cent of non-racialized people, according to their 2016 census.

The data being collected will give healthcare providers a clear and consistent understanding of what health inequity looks like, Obiorah said. This data can be used to inform health policy.

Obiorah said the impacts of racism create inequitable access to healthcare, meaning racialized communities with higher rates of chronic conditions such as diabetes and hypertension are more susceptible to communicable illnesses, like COVID-19.

“Without actual data […] the narrative or the stories or the experiences [of racialized individuals] can be easily dismissed as one-offs or anecdotal,” she said.

Obiorah added that despite the systemic struggles Black Canadians face, efforts are being made by healthcare providers to mitigate discrimination.

She said the Alliance for Healthier Communities establishes a health equity strategy that Community Health Centres (CHCs) in Ontario can follow to remove barriers and provide health and community services to racialized communities.

“A community health center is what we call a comprehensive, community-based primary care model. It looks at not only the medical aspect of your life but all the different social determinants that dictate your health and wellbeing,” said Obiorah.

As part of their advocacy work, they invite racialized community members to participate in conversations and projects regarding anti-racism.

“[Conversations about racism] create a safe space to acknowledge that racism exists,” said Obiorah. “[They also] help with highlighting to those who might not experience racism what racism can look like in different facets and how it can impact people’s lives, their livelihood, and their wellbeing” she added.

Obiorah said the lived experiences from community members help Somerset West CHC inform their programming from an anti-racist lens and these initiatives “are effective in elevating or providing [a] voice to those who experience racism and oppression. It’s effective in providing information to allies who want to make a difference.”

To continue mitigating healthcare barriers for the Black community, Obiorah said changes to alleviate risks must be made, including providing more services to communities that need them and providing representation of Black people within the healthcare system.

She said that amid COVID-19 this means “providing not only testing but healthcare intervention that is culturally confident and informed through an anti-racism lens.”

Anti-racism training is another avenue that could potentially help racialized Canadians, according to Fariba Al-Hassan, a second-year public affairs and policy management student at Carleton.

“Include anti-racial training during medical school, residency, and throughout a doctor’s career,” she wrote in an email.

Everyone has different life experiences that shape their behaviours and how they receive information, Obiorah said. She added that’s why anti-racism policy is important to dismantle conscious or unconscious biases.

Akinwande said another strategy to mitigate these barriers is through representation.

“Get representation of Black Canadians in the field who have this form of empathy and understanding for racialized people,” she said.

With the rise in the global consciousness of systemic racism sparked by Black Lives Matter protests around the world, Obiorah said it may be an opportune time to create lasting change while everyone is listening.

“With such a captive audience, let’s really take some time to collectively work at dismantling systemic racism and make some change for our community.”

Acknowledging the presence of systemic racism in healthcare is a crucial step, Olawoye wrote in an email.

“It is important to acknowledge the discrimination of Black Canadians in the healthcare system because by acknowledging it, change can be made,” she added.

Akinwande added she hopes those seeking to be active allies for Black Canadians will educate themselves and others.

Al-Hassan said in an email that actions to influence change must be continued beyond social media activism.

“This is more than just a trend or a hashtag, these are real people’s lives.”