After a year, let LTC residents out of their rooms: advocates

By: Todd Hambleton, The Intelligencer 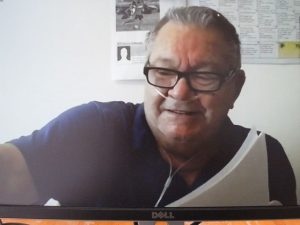 Alfred Borg, 83, during a lighter moment during an online media conference on Tuesday.

Long-term care facility residents, their families and advocates were recently demanding an immediate end to lock-in and isolation policies they say have created a desperate situation and a human rights issue.

“We’re extremely concerned about what we’re hearing right across Ontario,” said Natalie Mehra, executive director of the Ontario Health Coalition, and one of the speakers during an online media conference on March 30.

“Many (LTC) residents are desperate to get outside and enjoy the mild weather the rest of us have been, but they aren’t allowed to go out. . . it cannot go on like this. People are suffering.”

Mehra and others said they are calling on the government, on the Ontario Ministry of Health and Long-Term Care, to update the directives and put an end to what they say has been – for many – 15 months of isolation, which has taken a devastating physical and mental toll.

All of this was said before the decision made later that same week to enter a third provincewide lockdown, along with the April 7 announcement of a new stay-at-home order and state of emergency.

Alfred Borg, an 83-year-old at a long-term-care facility in Newmarket, said the quality of life for him and fellow residents has greatly diminished in the past year, that he hasn’t been outside in over 12 months – and hasn’t been allowed to have a shower in over five months.

“We’re not only restricted to the indoors, but to our (room). . . there’s no opportunity for exercise, or to release our stress and frustration,” Borg said. “So instead, we just sit in our room all day, wasting away.”

Borg said he remains optimistic he can soon have a shower, do some gardening, and see his family— even though that final point would now have to wait until the state of emergency, lockdown, and stay-at-home order expire.

“It’s not enough just being alive,” he said. “We need a better quality of life.”

He said there’s no outbreak in his facility, the residents have been vaccinated, but that heavy restrictions are still in place.

“How is this right?” Borg said.  “This is no longer about safety – it’s about control.”

Other speakers included Sandra Caleta, spokesperson for Voices of LTC and Advocates for Long-Term Care Reform in Ontario, who told the online audience the discriminating practices must end.