People’s Health Care Act, tabled Feb. 26 at legislature, consolidates 20 agencies under one entity in the hopes of improving service efficiencies 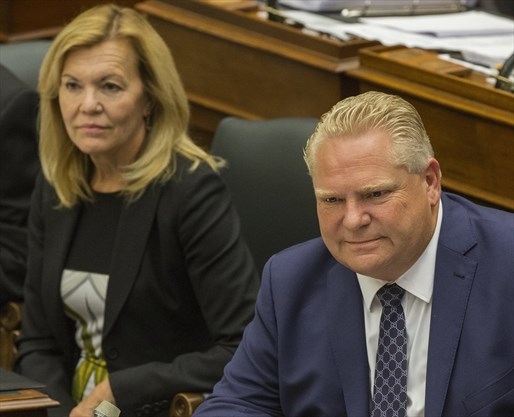 The new legislation, titled the People’s Health Care Act 2019, was tabled by Minister of Health Christine Elliott on Tuesday, Feb. 26.

Work to overhaul the system is expected to begin in the spring and take several years to complete.

“Even though this will be a transformation over a few years, it’s something that is long overdue. The situation with our health care couldn’t go on … The gaps that exist in care in this province, particularly for our vulnerable seniors, is very frustrating for everyone,” said Haliburton-Kawartha Lakes-Brock MPP Laurie Scott.

Scott explained the new super agency would see the development of Ontario health teams that would integrate the work of the agencies being consolidated. Those teams will consult with communities and determine local needs in order to make “more community-based” decisions.

“The new system will be very patient-centred,” said Scott, adding the key efficiencies will be achieved by “reducing the bureaucracy” that has contributed to wait lists and insufficient access to care.

“The silos had increased immensely,” said Scott, noting agencies operating independently of each other, yet for the same goal, has had a negative impact on supporting patient needs in an expedient manner.

While the move will most likely result in job losses, they will be at the administration level.

“We want to take the money out of the bureaucracy and put it into front line care,” said Scott. “It’s truly time to put the patient on the front line. It’s allowing a public health-care system that the patient and families can access easier and quicker. It’s about being more reliable. It’s about providing care where it’s needed, when it’s needed.”

A spokesperson for the Central East LHIN diverted questions about the impacts of the announcement to the Ministry of Health and Long-term Care.

In an email, ministry spokesperson David Jensen said the legislation is meant to take a “comprehensive, pragmatic approach” to dealing with health care in Ontario by better co-ordinating services.

“When health-care providers work together and are funded together, care will become integrated and the needs of the whole person will be considered,” he said.

“This will enable local teams of health-care providers to know and understand each patient’s needs and provide the appropriate, high-quality connected care Ontarians expect and deserve,” he says.

While Jensen did not say whether layoffs could occur at the Central East LHIN as a result of amalgamating, he did say the government’s plan would include integrating existing providers to create local teams for patients.

“To ensure this continuum of care, existing relationships with providers and organizations will continue,” he added.

This includes such as groups as family health teams, which, like health units, are not impacted by the amalgamation.

Lori Richey is the executive director of the Peterborough Family Health Team and she says by consolidating agencies it will improve lines of communication, which in turn will improve care for patients.

“If it breaks down the silos between the agencies that exists that’s a fantastic thing,” she says.

While the proposed changes don’t directly affect family health teams it does relate to the work her team does in the community, she notes.

One component of those changes is to connect patients’ digital records across agencies, that way patients won’t have to repeat their medical history every time they interact with someone new, adds Richey.

“That’s going to take some time but this particular government has committed to that so that’s a very positive thing,” she says.

Richey also says while she can’t comment on whether the consolidation of agencies will mean layoffs, she expects the Central East LHIN will accommodate the changes well.

“It’s not a huge change from the work the LHINs are currently doing, it’s just amalgamation,” she says.

She also adds the proposed legislation is in line with the Patients First Act, passed in 2017 by the previous Liberal government, to try and put patients at the centre of focus for health care and improve access.

And while it’s still early Richey says “Peterborough is in a really great position for these changes.”

“We welcome the government’s focus on co-ordination of services and patient-centred care, which have always been the driving force of our family health team,” said Perry. “Family health teams have been at the forefront of providing high-quality, collaborative care to local patients by providing access to different health-care providers working with patients and their family doctors. Our family health team looks forward to working with the government to implement its priorities and deliver the best results for our patients.”

Peterborough Public Health communications manager Brittany Cadence says health units were not explicitly mentioned in the announcement, so there’s nothing directly involving them.

“I did consult with my leadership team and they indicated that we really need to see the legislation before we can comment,” she says.

Cadence did point to a policy statement by the Association of Municipalities of Ontario (AMO), which said the provincial announcement did not involve restructuring public health agencies or municipal paramedic services.

The statement does not say whether the AMO approves of the proposed changes, but does say there is a need for more long-term care beds in Ontario, which the province has promised to create.

“AMO welcomes the minister’s commitment to us for increased ongoing dialogue about the government’s plan for implementation and transition,” says the statement. “AMO will continue to analyze the municipal impacts.”

Veronica Nelson, interim president and CEO at the Ross Memorial Hospital — where two new hospitalists were recently recruited with the assistance of HealthForce Ontario, one of the groups slated for consolidation — was interested to hear Elliott’s plans for the restructuring of the health system and looks forward to receiving more details.

“While it’s too early to comment on how these changes may impact the delivery of care in our community, here at the Ross, we’re committed to continuing to work closely with our system partners to provide the best care possible to our patients,” stated Nelson. “We embrace all opportunities to improve access to care and transitions between service providers.”

However, not everyone sees the changes as a step in the best direction.

“This bill opens the doors to privatization in an unprecedented way. There are changes to be made to the health-care system to improve the outcome and services for patients, but those will be achieved by investing more into the public system, not opening the door for more private care. The elimination of services and care agencies has Ontario patients and their families worried that the situation will get worse instead of better,” explained Barbara Doyle, Haliburton-Kawartha Lakes-Brock federal election candidate representing the NDP; the party obtained leaked documents regarding the draft legislation weeks before it was tabled.

According to Doyle, the plan to eliminate agencies such as Cancer Care Ontario not only means that services to patients will be affected, but hundreds of jobs will also be lost. In her view, the Ontario government plan creates “a top-heavy bureaucracy that renders communities and patients too far from decision-makers to make their voices heard effectively.”

“We have seen locally that residents fighting to stop the amalgamation of Ross Memorial and Peterborough Regional was effective. I am deeply concerned with the wording of the Bill, in that it gives sweeping and unilateral power to the agency to do anything it chooses,” continued Doyle.

Under Required Integration section 33 (1) 10, it states that the minister shall have the power to make orders “To do anything or refrain from doing anything necessary for them to achieve anything under any of paragraphs one to nine.”

“How are we to advocate for or fight changes if the government has an overriding legislation to do literally ‘anything’” questions Doyle. “The federal Liberal government and its predecessors should have invested more in health care so that services to patients could be maintained and improved … The federal government must make sure Ontario will not violate the Health Canada Act with its privatization plans and stop cutting funding for health care transfer to provinces.”

“What is most concerning about this act is the potential integration and amalgamation of our health services. Our community received a victory when Ross Memorial and Peterborough Regional decided not to proceed with amalgamation last year, but this could be back on the table. Services in rural Ontario may be in jeopardy as the government seeks to try and concentrate service to larger urban centres,” said health coalition co-chair Zac Miller, noting the group is “ready to fight to stop any amalgamation proposal concerning the RMH (Ross Memorial Hospital) and services around Kawartha Lakes.”

He recognizes that the merging of 20 agencies will not be done overnight, but “when the minister refuses to answer questions regarding job losses and how much money will be saved with this reorganization, the KLHC is doubtful that this move will actually save money and wouldn’t be surprised if it ends up costing more.”

Miller added the group is hosting a public meeting regarding the issue on March 27, alongside the Ontario Health Coalition. Further details on the meeting are expected to be released soon.