Attempted privatization of health care is moving ahead, stealthily

By: Linda McQuaig, The Peterborough Examiner 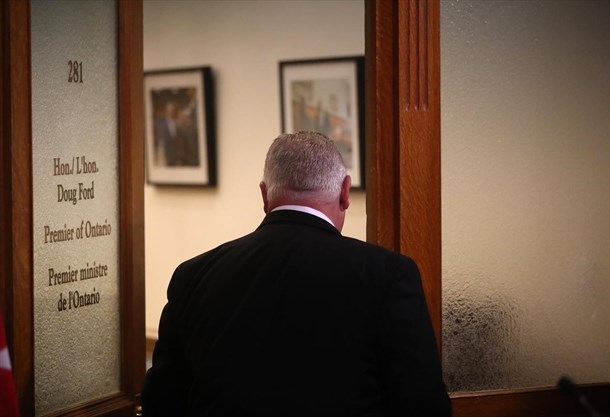 It warms the soul to recall the day last June when Doug Ford was heartily booed by the enormous crowd in Nathan Phillips Square celebrating the Raptors — a crowd so big that it even dwarfed the one at Donald Trump’s inauguration.

Humiliated by this stunning rebuke, the premier retreated from some of his more unpopular cutbacks.

But it would be a mistake to assume that Ford’s destructive austerity agenda has been derailed. On the contrary, it moves forward like a freight train, coming at us slowly but relentlessly, much of it under cover of darkness.

Among the premier’s sweeping cutbacks — aimed at reducing the deficit without tapping the corporate elite for more tax revenues — are a dizzying array of cuts to our public health-care system, the crown jewel of our social programs.

These cuts, totalling about $360 million, will affect everything from mental health care to cancer screening, according to Natalie Mehra, head of the Ontario Health Coalition.

Their impact will likely be profound, since Ontario’s health-care spending is already well below the Canadian average, even though Ontario is one of the richest provinces.

Indeed, Ontario’s health-care spending is only $3,903 per person — the lowest of the 10 provinces — and $487 per person lower than the Canadian average, according to Ontario’s Financial Accountability Office.

Even more damaging may be the Ford government’s embrace of further privatization, evident in recent legislation creating a health superagency with vast new privatization powers.

Let’s quickly clarify that there are no savings to be had from such privatization. Quite the contrary.

While government spending on the public portion of health care — doctors and hospitals — has held steady at about 4 per cent of GDP for the past 40 years, the costs of the private parts of the system — drugs, physiotherapy, dentistry, home care, etc. — have risen dramatically.

But Ford seems less concerned about controlling health costs than about pleasing business interests, which have long pushed to open our health-care system to more privatization, so they can get in on the spectacular profits reaped in private health care south of the border.

The public face of this campaign has been B.C. medical entrepreneur Dr. Brian Day, who has spearheaded a 10-year legal battle to strike down Canadian medicare laws restricting private surgical clinics from collecting money through the public system while also charging patients hefty additional fees.

Behind the scenes, Day has had ample financial support from private interests who recognize that his victory would open the floodgates to private medicine in Canada. “If he wins, you can kiss goodbye to medicare as we know it,” says Colleen Fuller, a health policy researcher affiliated with the Canadian Centre for Policy Alternatives.

Astonishingly, much of this anti-medicare campaign appears to have been waged with tax-deductible dollars. A massive $5-million war chest to support Day’s legal challenge has been amassed by the Canadian Constitutional Foundation (CCF), a right-wing, Calgary-based organization — with charitable status.

Meanwhile, a pro-medicare group called Canadian Doctors for Medicare is denied charitable status in Canada, on the grounds that it’s an advocacy group. So, while you can get a tax deduction for a donation to fight medicare, you can’t get one for a donation to save medicare. Ironic, since most Canadians revere medicare.

Far from the boos that greeted him at Nathan Phillips Square, Ford has now moved to the backrooms where he’s quietly helping financial interests, domestic and foreign, get a chunk of our crown jewel.