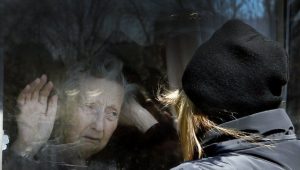 Orchard Villa is the hellhole nursing home in Pickering where 70 residents died of COVID-19.

Families of Orchard Villa were justifiably horrified to learn that the Ford government is considering giving Orchard Villa a new 30-year licence and expansion.

With the help of the Ontario Health Coalition, the families sought a legal opinion on the matter.

Steven Shrybman of Goldblatt Partners LLP last week made his view clear that renewing the licence for Orchard Villa is a non-starter.

Citing the rules laid out in the Long Term Care Home Act (LTCH) act, Shrybman stated it is “impossible to reconcile the history of past conduct (at Orchard Villa) with the standards clearly delineated in the act.”

He also argued that the case for denying the licence “is clear to overwhelming.”

Shrybman added that he is sure the lawyers working for the ministry will come to the same conclusion.

“The law is what will determine what advice they’re getting internally. And the law is very clear.”

Orchard Villa is the disgraced long-term care home that saw 206 of 233 residents — and 100-plus staff — contract COVID; the home was taken over by the local hospital and the military, and their reports on the conditions at the home are shocking and sickening.

According to allegations in the report, residents were found in soiled diapers and some were severely dehydrated, cockroaches and flies were everywhere, residents were fed while lying down — allegedly leading to at least one choking death — and the stench of rotting food in the rooms was evident.

Premier Doug Ford called it “the most heart-wrenching report I have ever read in my entire life.”

The Ontario government’s response to the crisis in long-term care homes was to pass Bill 218, preventing anyone from suing a home for a COVID exposure-related claim.

Families whose loved ones died in Orchard Villa have been waiting a year for some accountability. There have been no consequences for the suffering and death at the home during COVID.

Orchard Villa is one of 37 properties in Ontario owned by Southbridge Care Homes. It is managed by Extendicare, which runs more than 100 such homes in Canada. Orchard Villa is a for-profit facility.

A spokesperson for Southbridge said Orchard Villa was hit early on in the pandemic, “at a time when the global medical and scientific community was still learning about the virus and how it was transmitted,” notwithstanding a timeline that includes military intervention in July 2020 and another COVID outbreak in February 2021.

The statement also said the home had had “challenges” but had learned from them and “made changes that are both reflected in the way Orchard Villa currently operates, and in the design of the proposed new home.”

A redevelopment, “is an important part of infection prevention and control, and a redeveloped Orchard Villa would help provide us with the ability to isolate ventilation and HVAC for each floor in the event it is required,” the statement continues, suggesting that bricks and mortar were the problems during COVID.

Representatives of the Ontario Health Coalition and of the Orchard Villa families spoke last week of how they feel Premier Ford and Minister of Long Term Care Rod Phillips have dodged the situation at the nursing home.

Family members of Orchard Villa residents claim they were not able to have their say at a public hearing held in the summer by The Ontario Ministry of Health and Long-Term Care.

Being ignored is partly what prompted them to seek a legal opinion on the matter.