We have excellent health care. We don’t have enough of it. Yet Doug Ford’s new health care omnibus bill does not open a single new health care service. Not a single surgery to help tackle wait lists. Not one new nursing home space. No more health professionals, vital support staff, nurses or doctors.

At the same time, Ontario has the fewest hospital beds left of any province in the country and of any developed nation, even while patients wait for days on stretchers for a bed to open up. Every major hospital has operating rooms that are closed due to lack of funding, even while people wait for surgeries. Our province funds our hospitals at the lowet rate in Canada. We also have the second fewest long-term care beds of any province while wait-lists number 33,800. The evidence is clear: cuts and rationing have gone too far. In fact, in the election Mr. Ford traversed the province promising more, not a wholesale dismembering of the health system.

There is no question we can afford to expand health services and improve care levels. Ontario has a long way to go even just to reach the average funding of the rest of Canada. We are asking Doug Ford to focus his attention and energy on restoring and expanding public non-profit health care services, and on proper planning to meet our communities’ needs. No more cuts and privatization.

What is in Mr. Ford’s health care omnibus bill is a new “Super Agency” forged out of 20 existing agencies with widely disparate mandates, histories, levels of effectiveness, and cultures. But that’s not all. Written in the new law are vast powers that the government has given itself and its political appointees in the new “Super Agency” for a wholesale restructuring of our local hospitals, long-term care, home care, community care, mental health, health clinics and so on. Restructuring powers are defined in the legislation as not only service coordination but also mergers, amalgamations, transfers of all or part of a service, closures of a service, and entire closures of local health services.  In the law itself these are not simply “voluntary”, as the Minister describes them. What is actually written in the legislation is a set of virtually unfettered powers that take away any last remaining vestiges of local control. The only public governance of health care will be from a “Super Agency” run out of Toronto.

Doug Ford’s new omnibus health care bill does not add to or expand health care for people. But it does take attention away from care to restructuring without adding anything to front-line care. The evidence shows that restructuring costs a lot of money and often leads to local towns losing services.

Already the attention of every CEO and manager in the health system has turned to restructuring. The reality is, the large and the ambitious, the empire builders in the health system, will turn their attention and resources to planning takeovers of other services. The large chain for-profit corporations will seek to expand their “market share” and profits using the new opportunities afforded in this legislation.

The evidence does not support the contention that “Bigger is Better”. In fact, many towns lost local services in the last round of restructuring, never to get them back.  The Provincial Auditor reported that the last hospital restructuring cost $3.9 billion. That was billions of public dollars spent to cut $800 million and lay off nurses and staff, close down local services, then rebuild them elsewhere. That money was lost to frontline care forever.

New Bureaucracy But No Public Oversight

That equals 30 – 50 new uber administrations plus the mother Super Agency, as compared to 14 LHINS and 6 agencies that exist at present. Furthermore, the administration of the conglomerates will be owned by the providers themselves in their interest, not public oversight in the public interests.

This is worse not better.  You can see why the leadership of chain companies and large CEOs are salivating. They’ve just been given carte-blanche to take control over our local health care services.

No Public Consultation: Virtually All Community Control Taken Away

Virtually all the democratic protections that we won in previous legislation have been stripped in the new omnibus law. There are no open board meetings. No public right to access restructuring documents. No appeals. There is only the weakest possible language in the new legislation regarding community engagement (that’s what they now call democracy or public input). There is no evaluation system for the vast new restructuring. There was no public consultation prior to this Bill and there is no opportunity for any meaningful public input into the health system that the public funds that should be ours, as the people of Ontario.

Another half decade or more of upheaval and takeovers will be devastating to a workforce that has stretched itself for decades to do ever more.

What Can We Do

With respect that is due to them in the strongest terms possible we urge the Ford government to hit “pause”, to engage in proper public consultation and to make a new priority of actually improving access to public health care services for the people of our province. 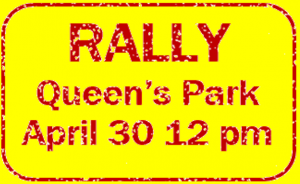