By: Ashifa Kassam, The Guardian 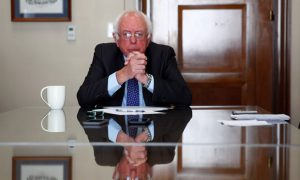 Bernie Sanders is visiting Toronto this weekend as he pushes universal healthcare in the US. Photograph: Eric Thayer/Reuters

Bernie Sanders will arrive in Toronto this weekend for a crash course in an unrivalled point of pride for most Canadians: the country’s healthcare system.

The visit – which will include roundtable discussions, facility tours and meetings with patients – is aimed at better understanding how Canada provides universal healthcare that yields a longer life expectancy and lower infant mortality rate than the US while spending about half as much per capita.

What Sanders learns will probably inform his push to provide publicly funded healthcare for every American, forming the backbone of a movement that has repeatedly cited Canada as an example to be followed. But as Sanders heralds Canada as a place where health care needs consistently trump the ability to pay, some are sounding the alarm about the inequalities that plague the Canadian system.

Some of these are blatant, thanks to the stream of for-profit medical clinics that have set up shop north of the border in recent decades.

“I think privatisation is a major threat to public health care in Canada,” said Natalie Mehra of the Ontario Health Coalition.

Earlier this year, her organisation released a report documenting 136 private clinics across the country and highlighted that 71 of these were selling faster access to services covered by the country’s health care system. What’s more, the report suggested that many of the clinics were charging patients while also billing the public health care system – a practice that runs contrary to Canadian law.

Relying on volunteers to pose as would-be patients, the report documented prices of up to C$10,000 for minor knee surgery and C$5,000 for cataract surgery. “We found that costs for patients in the private clinics are exorbitant – up to five times or more than those in the public system,” said Mehra.

The report was careful not to overstate the role of these clinics, noting that the vast majority of hospital and physician services in Canada continue to be provided within the publicly funded system. “But the threat is real,” it continued. “In the majority of provinces, private clinics have set up shop and are charging user fees to patients.”

Since the report’s release, several groups have pushed the federal government to take action, including Canadian Doctors for Medicare. “I think the report was shocking for a lot of Canadians who were seeing some of this information for the first time,” said Danyaal Raza of the organisation.

Those behind private clinics have defended them as a necessity, describing them as a means of relieving pressure on a system that suffers from some of the longest wait times in the developed world.

Raza pointed to jurisdictions that most resemble Canada, such as Australia, where the introduction of private providers diverted doctors’ time and attention, resulting in longer wait times in the public system. “The only people who benefitted were people who were able to buy their way to the front of the line,” said Raza.

An alternative solution may lie in the growing support among Canadians to expand the country’s coverage – which currently only covers hospitals and physician care – to areas such as pharmacare and dental, he said.

The merits of doing so were hinted at in a recent ranking of health systems in wealthy countries by the Commonwealth Fund.

The US-based thinktank ranked Canada near the bottom – but still ahead of the US – highlighting the relatively narrow range of coverage and the resulting struggle by many to afford necessities such as vision care or home care.

Sanders’ plan for Medicare – which goes much further than Canada’s to include aspects of care such as psychological services and rehab – laid bare the many gaps in Canada’s system, said André Picard, who for three decades has reported on Canada’s health care for the Globe and Mail.

Since the 1970s, the amount Canadians spend on private healthcare has remained stable, making up about 30% of all health spending, compared to about 15% in most European countries. “Everybody says we have a public system and I say not really: we have a private system just like every other country,” he said.

As the Vermont senator touts plans for a far more comprehensive and equitable system south of the border, Picard is among the many in Canada who hope it will prompt Canadians to revisit the glaring gaps in their own system.

“I don’t think we’re ambitious enough,” he said. “Canada has limited ourselves to doctors and hospitals, and there’s no reason like the rest of the developed world that our public plan couldn’t cover all kinds of things, from dental care, home care to long term care.”