For Lisa Snow, the news that her mother Carolynn would be first-in-line for the Moderna vaccine at Cedarvale’s long-term care home brought more than a sense of relief; it brought an end to constant worry.

“We lost my aunt to Covid at River Glenn, so for the past ten plus months, we’ve been constantly on alert. So I don’t know that relief is even the right word. It’s more substantial than that. It’s a lot of stress off,” she said.

Cedarvale Lodge Care Community received the Moderna vaccine on January 6, and nearly 60 long-term care residents, who consented to be vaccinated, received the shot on the same day.

Some staff and essential caregivers were also vaccinated with the Pfizer vaccine at Southlake in late December.

“The remaining staff and essential caregivers will receive the Moderna vaccine at the residence so that everyone connected to the Cedarvale community is protected,” said Nadia Daniell-Coloarossi, a spokesperson for Sienna Senior Living, in an email to The Post on January 7.

As essential caregivers, Ms. Snow and her husband were both vaccinated. But she said they will still need to be tested weekly and wear masks to visit her mother.

“It was kind of disappointing that we’ve gone through all of this, but we’re not at a point yet where we can relax and let our guard down,” she said.

While Ms. Snow said most residents at Cedarvale’s LTCH opted to get the vaccine, there were a few hold outs.

But her mother, Carolynn Snow, 79, who is president of the home’s Residents’ Council, is hopeful that they will soon change their minds.

“I am happy to be the first resident in the home to get the vaccine, and I hope this will make others feel more comfortable about getting the vaccination,” she said. 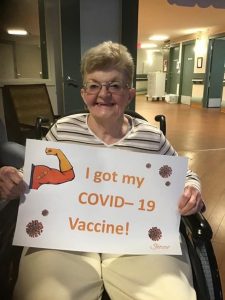 The vaccinations appear to have come just in the nick of time, as public health reports a caregiver at Cedarvale’s retirement community tested positive on January 7.

Although none of Cedarvale’s long-term care residents have been infected during the pandemic, the retirement community has now suffered two outbreaks.

The first outbreak was reported on November 9, with four residents, one team member and two private caregivers testing positive. That outbreak lasted 24 days and was declared closed on December 12.

According to public health, distribution of the Moderna vaccine in York Region began on January 2.

There are 28 long-term care homes in the Region – 14 are currently listed in outbreak – with approximately 3,700 residents to vaccinate.

According to Patrick Casey, a spokesperson for York Region, public health has enough doses to do the job.

“The province has provided enough doses for every resident of the long-term care homes and retirement homes in York Region,” he said in an email to The Post, adding that shipments of additional doses continue to be received.

Initially, public health said the vaccinations, following provincial guidelines, were to wrap-up by January 21, but Mr. Casey said the first dose of the vaccine should be completed by the week of January 11.

“In our current plan, all long-term care residents in York Region who consent will receive their first dose by early this week; this includes River Glen Haven and Cedarvale Lodge,” he said.

While that’s welcome news, some health care experts say the vaccine roll-out in LTC homes should have been completed much sooner.

Doris Grinspun, CEO of the Registered Nurses’ Association of Ontario (RNAO), has been an outspoken critic of Ontario’s vaccine roll-out, especially in long-term care.

She said there were serious missteps made with the Pfizer vaccine.

According to Ms. Grinspun, the vaccine, which must be stored in special fridges at – 70 Celsius, can be temporarily stored in a regular fridge.

“With the Pfizer it was very clear early on that you can store it up to five hours in three to four degrees. It didn’t have to be minus 70,” she said.

“So Pfizer could have gone to the nursing homes because many of them are 15 minutes from most hospitals. In five hours, you would have administered all of them.”

Instead, the Pfizer vaccine, which was available weeks before the Moderna vaccine, was administered at hospital sites, making it more difficult for LTC residents and staff to get a shot.

Ms. Grinspun also argues that vaccinations should have occurred around the clock, instead of during a regular day shift.

“If we had gone 24/7 as it’s been done in other countries, then we would have been finished by January 4. And we would have saved a lot of grief and suffering, both on the staff and the resident side.”

According to Dr. Arya, the province has unnecessarily delayed the roll-out of vaccines, which may have cost lives.

“We have exploding outbreaks in long-term care across the province. The seven day average of deaths has tripled since the beginning of December,” he said.

“Technically, we should have been giving booster shots to everyone at this point. It should be almost at the final stage, but they sat on it for about three weeks. That’s obviously not good enough when we have this sort of terrible virus that can lead to death in hours.”

Both Ms. Grinspun and Dr. Arya point to issues with the province’s COVID-19 Vaccine Distribution Task Force, responsible for the roll-out of vaccines.

“I don’t think there was a proper plan, and there wasn’t proper leadership from the very beginning,” Dr. Arya said.

“It has a retired army general, an auto-parts CEO, but it’s lacking the people who actually give vaccinations on a yearly basis.”