By: Jeffrey Ougler, The Sault Star 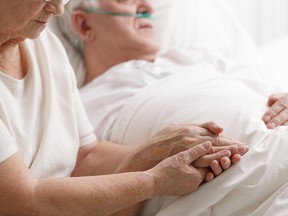 With I’s dotted and T’s crossed, there is a “pretty good chance” of success for a constitutional challenge to an Ontario law that allows some discharged elderly hospital patients to be forced into a nursing home they did not choose, says an Ontario Health Coalition Algoma District representative.

OHC and the Advocacy Centre for the Elderly launched a constitutional challenge Monday in response to the Ford government’s new law that forces elderly hospital patients into long-term care homes against their choice. The two groups will be co-applicants to the Ontario Superior Court of Justice in what is known as a Charter Challenge, seeking a court ruling to strike down the law as a violation of the fundamental rights of the patients affected under the Charter of Rights and Freedoms.

“(Health-care advocates involved) have all been doing really good work for a long time and I’m sure this was well thought out and it’s not just something that they’ve pulled out of the air,” Al Dupuis told the Sault Star. “I think there’s probably a pretty good chance that it will succeed. I certainly hope that it will. I certainly hope it shines a light on the moral choices that are being made by our politicians around these issues.”

Bill 7 passed in late August and came into effect Sept. 21, but the full scope of the law was only realized Sunday when one of its most controversial components kicked in. Ontario hospitals are now required to charge a mandatory fee of $400 per day to discharged patients who refuse to go to a long-term care home arranged on their behalf.

OHC, which brands the More Beds Better Care Act as “fundamentally discriminatory” against the frail and elderly, said there is currently no way to appeal if patients are forced somewhere they don’t want to go.

The province has said the law is meant to help ease pressures on hospitals that have been overwhelmed by emergency visits and surgical backlogs.

The rules apply to hospital patients deemed by doctors to need an “alternate level of care,” who have been placed on a wait-list to get into a long-term care home. The province said there are about 1,800 such patients across the province.

OHC says there are 38,000 people on the waitlist for long-term care.

Bill 7, the coalition says, allows hospitals or discharge planners to override patient consent to secure a bed as far as 70 kilometres away in southern Ontario and 150 kilometres away in Northern regions. If there are no beds available, the law allows Northern residents to be sent even further afield, OHC said.

Residents in this region, Dupuis contends, are getting the shortest shrift of all.

“In Northern Ontario, (the 150-kilometre standard) could be meaningless,” said Dupuis, who retired to Blind River from Ottawa two years ago and has elderly relatives here in local long-term care facilities.

“If there’s no beds the Sault, for example, or Sudbury, and if my wife or myself found ourselves in a position where we needed long-term care, well, anywhere in Ontario is on the table now.”

Given Northern Ontario’s geographic size, with towns and cities mostly connected by undivided highways, driving long distances to see a relative could be hazardous, Dupuis said.

“It’s bad enough for someone that’s in metro Toronto where the likelihood that there may be (an available placement) is probably better than the likelihood for people in the North,” he added. “But, just the fact that’s taking away your constitutional rights under the charter to solve a problem that is not the result of some natural disaster where you might otherwise be able to say, ‘These are really, really extenuating circumstances.’ This crisis that we’re in now is the making of government policy over the last decade or more and exasperated under this government.”

Dupuis has had first-hand experience travelling Northern highways to visit senior loved ones. His mother and mother-in-law are now both in long-term care in Blind River, but were initially placed in Elliot Lake and Thessalon facilities.

“We have few facilities and there’s just fewer alternatives and the distances, just the geography,” he added.

OHC says the law also prioritizes hospitalized people waiting for beds, in effect bumping everyone else staying in their homes while awaiting long-term care. If people end up falling sick because of that, they would end up in hospital and then be discharged to a long-term care facility they don’t necessarily want.

“The solution, which is not even a solution, will only make, at best, a very small dent in the terms of occupancy in our major hospitals anyways, which are running way overcapacity in most cases,” Dupuis said. “So, it doesn’t solve the problem that it’s purported to solve. For me, it’s just outrageous that people are in this position.”

The constitutional challenge will help shine light on the matter, said Dupuis, who served as co-chair of an OHC chapter in Ottawa.

“If the challenge doesn’t stand up, then the public outrage around the challenge ought to be enough to make the government back down.”

– with files from The Canadian Press