Group says the reality of long-term care homes is not how the Ford government portrays it. 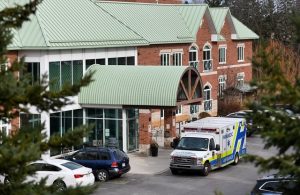 A coalition of 100 health-care organizations and relatives of long-term care residents is accusing the provincial government of downplaying what it says is a deadly crisis in Ontario’s long-term care (LTC) homes.

In a tearful Zoom teleconference on Jan. 22, three days after Premier Doug Ford said the situation in LTC homes would be “hunky dory” if only Ontario had more COVID-19 vaccines, people with elderly parents living, or having recently died, in LTC homes described scenes of chaos, confusion and anguish.

“My mom passed away on Dec. 26, 2020. She was 81,” said Jennifer Penney, whose mother, Yvette Brauch, was a resident at a facility in Niagara Falls. “The system has failed her in many ways.”

Penney described how an automated voice message from the lodge informed her of an outbreak there in the third week of December. Her calls to inquire about her mother went mostly unanswered. She believes the facility was severely understaffed. Eventually, someone informed Penney her mother had contracted COVID-19.

After several days, during which she received conflicting reports about Brauch’s condition, someone called on Christmas Day to tell Penney her mother was dying. On Dec. 26, she drove with her son from Oshawa to Niagara Falls to say goodbye.

“When we arrived, there was no one at the door to let us in,” she said. The nursing station she could see appeared empty. “We were banging on the door for several minutes.”

Eventually, they were let inside and told staff hadn’t checked on Brauch in “a while” and weren’t sure if she was alive.

Brauch, who was unconscious, died half an hour later. Penney spoke with a nurse who tearfully told her she’d been working for 16 hours with no relief. On their way out, a resident sitting in a wheelchair in a hallway begged Penney and her son for water.

“The conditions our seniors and family members are living in are horrific and inhumane,” she said. “There’s no excuse for what has happened in these homes and to these workers.”

Penney was one of four people who told stories of parents who had suffered or died in isolation, whether from COVID-19 or other conditions, in understaffed long-term care facilities during the second wave of the pandemic.

Their message to the province was summarized by Natalie Mehra, executive director of the public health-care advocacy group Ontario Health Coalition.

“We are deeply disturbed at the messages coming for Doug Ford and from the minister of long-term care downplaying what is, without question, a crisis in Ontario’s long-term care homes,” Mehra said.

“We can not believe that this is the message from our provincial government, the narrative that everything is OK and everything is under control.”

On Jan. 19, Ontario’s Minister of Long-Term Care Merrilee Fullerton said only a small number of long-term care homes in Ontario have resident COVID-19 cases, and that the number of homes with serious outbreaks is “much smaller.”

Mehra said the Ontario Health Coalition believes this is “patently false,” and that a shortage of long-term care staff across the province has left facilities ill-equipped to handle the second wave of the pandemic.

The coalition is calling on the province to:

• Recruit between 10,000 an 20,000 long-term care staff and provide intensive fast-track training to get them into homes as quickly as possible

“There are 2,700 or more residents and staff with active COVID-19 infections in long-term care homes,” she said, adding that, at this rate, Ontario is on track to surpass the first wave’s cumulative staff and resident COVID-19 death toll in the next two weeks.