By: Dan Darrah, The Breach 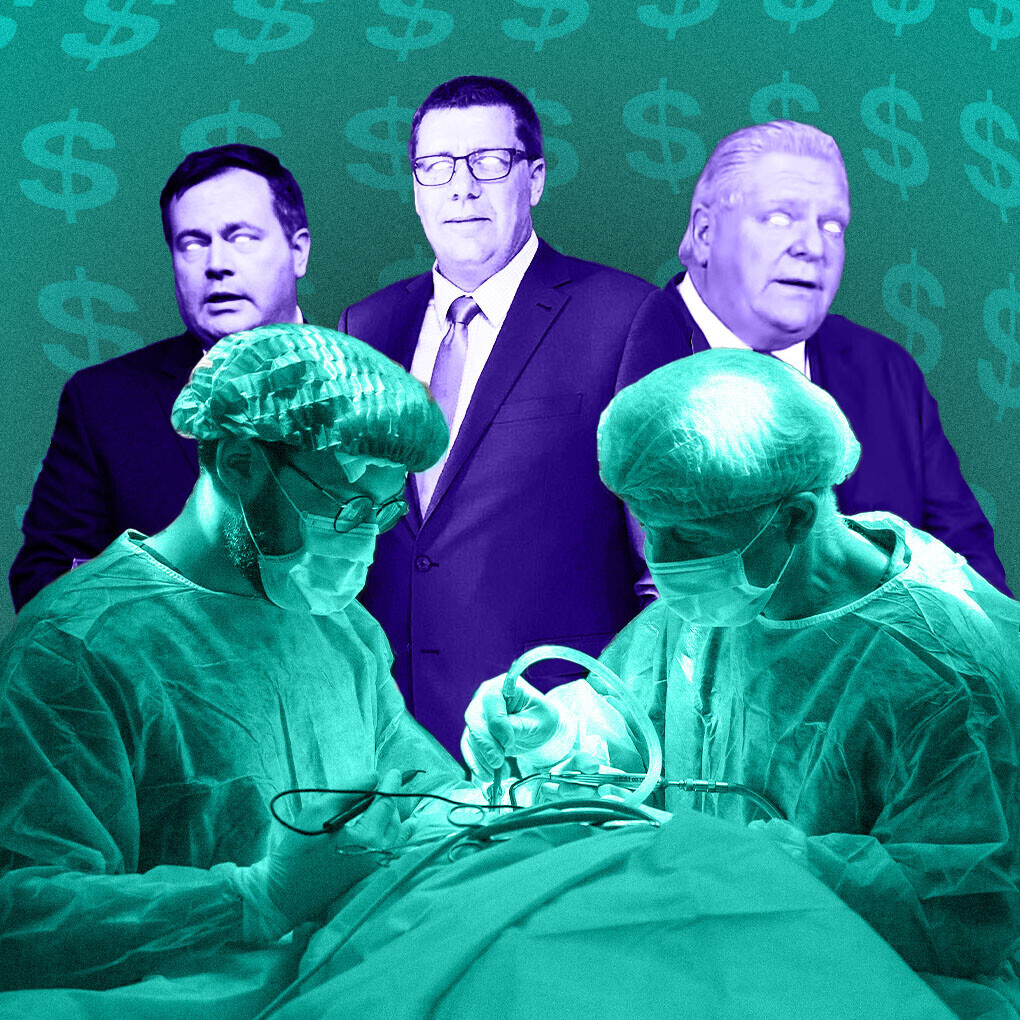 “I knew as soon as I heard the voice of the doctor’s assistant,” Vicky Stewart recalls.

In December, she got the call that her husband John’s surgery had been cancelled.

“It was awful,” she says. John was diagnosed with Parkinson’s a decade ago and had been waiting for three years for deep brain stimulation, a major operation that could radically improve his quality of life.

He takes around 40 pills a day, Vicky says, and between his tremors and falls and frequent hospital visits, life has been an “emotional rollercoaster.”

A month later, in January, his rescheduled surgery was cancelled again—thanks to pandemic-related staff shortages in their hospital near Waterford, Ontario.

“We’re not mad at the hospital,” says Stewart, who works in hospital administration. “It’s just an unfortunate circumstance.”

But the Stewarts aren’t alone. With hospitals overstretched by COVID-19, surgery backlogs across the country have soared. In the first year of the pandemic, more than a half-million fewer surgeries were performed compared to 2019.

In Ontario alone, delayed treatment has been tied to 4,000 deaths.

With demand straining the public health-care system, the conservative-led provinces of Alberta, Ontario, and Saskatchewan are pursuing a contentious tactic to clear their backlogs: tapping private providers to do the surgeries, and paying them from the public purse.

It’s a plan Alberta was already pursuing before the pandemic. But health advocates are warning that Conservative governments appear to now be seizing on a crisis to advance a long-standing right-wing agenda of health care privatization. Could this be a stealth stepping stone to two-tier health care, where only those who can afford it get the attention they need? 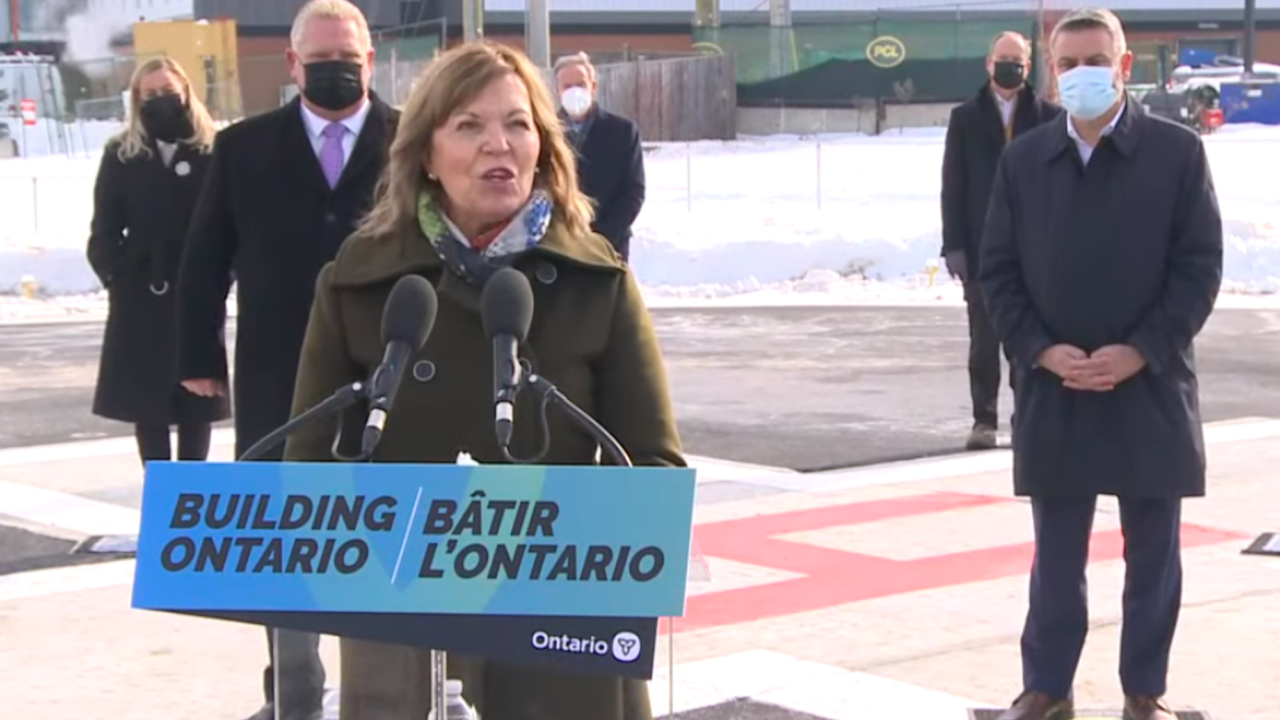 When Ontario Health Minister Christine Elliot revealed her government’s intention to hand over more surgeries and treatments to private companies in a press conference last week, she caught health advocates off guard.

“It’s a bombshell announcement,” says Natalie Mehra, president of the Ontario Health Coalition. “And it’s one that we are going to fight with everything we have.”

As a first-of-its-kind policy in Ontario, Mehra says that allowing private clinics to operate as more fully-fledged private hospitals would be “devastating,” potentially paving the way for erosion of public healthcare.

Ontario’s surgery backlog isn’t precisely known, but experts say that under the current capacity it could take up to two years to catch up on delayed appointments and treatments.

The Progressive Conservative government, which has made broader cuts to healthcare and has pursued further privatization in long-term and home care, introduced changes in 2021 to enlist private clinics for more operations and opened the door to privatized eye surgeries.

But with these new changes, private clinics—which currently only provide a few simple “day” surgeries—would likely have an even broader mandate for private operations. That could mean inpatient beds, overnight surgeries, and a whole range of operations they can’t provide now.

“It’s privatization on a scale that no government in Ontario has ever contemplated,” Mehra says.

Saskatchewan is following suit. Facing a backlog of around 35,000 surgeries, the right-wing government of Scott Moe plans to cede certain procedures to the private sector. It’s still deciding which ones, and whether the changes will be permanent.

And in Alberta, where Jason Kenney’s United Conservative Party has made for-profit healthcare part of their party’s platform, the threat is even more advanced.

The province recently partnered with private clinics to begin outsourcing eye surgeries, and is in the early stages of doing the same with orthopedic surgeries—part of a broader privatization agenda that has seen Kenney sell off public labs, home care, and laundry services.

Two years ago, the passage of Bill 30 put into motion the Alberta government’s goal of privatizing up to 30 per cent of surgeries by 2023.

Physicians Dr. Danyaal Raza and Dr. Thara Kumar called the omnibus legislation potentially “one of the biggest moves towards investor-driven, for-profit health care, in the history of medicare.”

“For every public dollar that we put into private delivery, we’re getting like 90 cents worth of value,” says Heather Smith, president of the United Nurses of Alberta. “Because there has to be profits, or private companies have no reason to exist.”

The consequences of private care can also ricochet throughout the public sector.

Both Smith and the Ontario Health Coalition’s Mehra say private clinics end up taking on easier—and therefore more profitable—surgeries, leaving the more complex ones to the public sector.

With fewer resources and less staff, it’s a scenario that could see patients like John Stewart waiting even longer for medical attention.

Health advocates warn that bringing for-profit companies into health care systems also opens the door to user fees, leading to two-tier health care where those who can afford it can pay to skip the line—the long-time goal of Kenney’s UCP.

In Alberta, private surgeries—and clinics more generally—expanded under Ralph Klein, the province’s premier from 1992 until 2006.

“We’ve had [for] at least 30 years an ideology that has been bent on promoting private delivery,” says Smith, explaining the Klein years promoted the idea that “government should be out of anything that the private sector can deliver.”

She says the contemporary UCP holds the same philosophy but “on steroids.”

Some of these surgeries cost the government as much as 32 per cent more than the same surgeries offered through the Alberta Health Services.

In 2010, the hospital filed for bankruptcy. But because Albertans had become dependent on that hospital’s role in the system, the government pursued an expensive government bailout to keep it going.

“[Private companies] depend on the public system: having their bills paid, and paying for their profits,” Smith says. “And if that doesn’t happen, then they don’t succeed.”

These mixed results raise the question if public money would be better spent simply expanding public health care, where money doesn’t need to be allocated to profit.

The prairie provinces might have experienced it most intensely, but all Canadian jurisdictions have felt the push for privatization for decades.

Following corporate pressure, federal spending cuts in the 1980s and ‘90s reduced capacity and kicked the door open for the private sector to take over aspects of health care provision.

“A lot of hospitals have been downsized as a result of the pro-privatization mindset,” says Colleen Fuller, a longtime health policy researcher and author of Caring for Profit: How Corporations are Taking Over Canada’s Health Care System. “We have a very, very low hospital bed count compared to our counterparts in the European Union and also the United States. That has handicapped us.”

“You pull staffing, resources, and you further hamper the ability of the public system to deliver,” Smith says. “Then you say, the ‘public system has failed, and we have no choice.’”

But for many, it’s the perfect time to invigorate and expand the public sector.

“There are untapped strengths in the public system in Canada,” says Fuller. “We have to stop looking at hospitals as if they are a drain on our economy and start looking at them at the essential services that they are.”

In Ontario, Christine Elliot’s announcement of private clinics is setting activists in motion. “We’re heading for a huge fight,” Mehra says. “This will be an election issue.”

Two hours from Queen’s Park, in Waterford, John and Vicky Stewart are now doing their best to ensure neither gets COVID-19, which would risk another surgery cancellation.

“We never know when that phone is going to ring,” Vicky says.

The morning after talking to the Breach, they got the call. John is scheduled to go into surgery next week.