COVID-19 outbreaks in long-term care facilities skyrocket, but deaths are a fraction of last year’s toll

By: Xiao Xu, The Globe and Mail 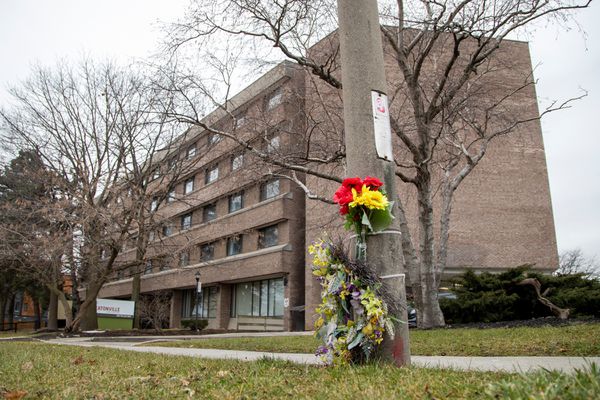 Flowers were placed on a lamppost outside Eatonville Care Centre in Toronto on Dec. 30, 2021.

Omicron is driving exponential COVID-19 growth in long-term care homes, but the less-lethal variant is responsible for dramatically fewer deaths across the country than in previous waves.

Experts say the biggest threat to vulnerable seniors in care homes right now, however, is prolonged social isolation and a collapse in care caused by significant staff absences.

The number of outbreaks in long-term care started to increase again in the new year. Currently, 384 out of 626 LTC facilities in Ontario have an outbreak. In Quebec, 278 have been hit; dozens of residences in B.C. are now under an outbreak notification.

But the number of deaths and severe illness in LTC homes caused by the virus in recent months is much less than in previous waves.

“We expect that the case fatality rate now, during this wave, will be a lot lower because of the benefit of vaccines,” said Samir Sinha, the director of geriatrics at Sinai Health System and the University Health Network in Toronto. “But what will artificially inflate that number will actually be the lack of our ability to provide care to residents when they’re sick.”

Thursday, a draft of new long-term care guidance was unveiled for public review by a group that develops national health care standards. Dr. Sinha, who chaired the Health Standards Organization technical committee, said there are several criteria in the draft standards that he believes would have prevented the thousands of deaths among long-term care residents during the COVID-19 pandemic.

The standards are focused on providing care and quality of life for residents, as well as a positive work environment.

In the latest wave, figures from Dec. 21 to Jan. 20 show 139 people died in long-term care facilities in Ontario, compared with 726 in the same period a year ago. In Quebec’s LTC homes, known in the province as Centres d’hébergement de soins de longue durée (CHSLD), 176 people died, compared with 549 last year. In Alberta, 33 deaths were reported, compared with 208 deaths a year ago.

In B.C., 31 people died in long-term care homes from Dec. 20 to Jan. 18 according to the BC Centre for Disease Control. The agency did not provide the number of deaths for the same period last year.

B.C. Provincial Health Officer Bonnie Henry said Tuesday that 119 people died as a result of COVID-19 in January so far and about one third of them – 41 – were associated with an outbreak in long-term care. Most of the others who died were people older than 80.

“Our seniors and elders continue to bear the significant burden from this virus and that has not changed in terms of people becoming ill,” she said.

British Columbia’s seniors advocate, Isobel Mackenzie, said that currently, between 5 and 10 per cent of long-term care residents who have been diagnosed with COVID-19 later died from the virus.

“That’s frankly what we would see in flu outbreaks, for example, in previous life before COVID,” she said. “This virus appears to be significantly less severe, but it’s still more severe in older people.”

Natalie Mehra, executive director of the Ontario Health Coalition – an advocacy group that lobbies for public health care, agrees that the fatality rates in Ontario’s long-term care facilities are “not anywhere near what we were seeing at the worst of the second wave.”

However, she noted, public messaging that suggests Omicron is a milder variant is devastating to the health care system. She said that because Omicron is so contagious, more of the population is being infected, including in long-term care homes. She stressed there are still many deaths occurring.

“Before the pandemic, in a normal home, we’d hear that there were four PSWs [personal support workers] per unit on shift, and a unit might be 20 to 33 residents. Now, there might be two or one, sometimes none,” she said.

Last year, a Quebec public hearing into dozens of deaths at a care home found some elderly residents died from thirst, malnourishment and neglect. Also, in May, 2020, a Canadian military report chronicled horrific conditions at five long-term care homes in Ontario, ranging from poor infection-control practices to the neglect and abuse of residents.

“It’s horrific when we heard about when care collapses, and that can only negatively impact someone. So this is not a new concept. This is something we’ve witnessed before,” Dr. Sinha said.

“In fact, we might actually have fewer staff at hand who can meet their basic care needs. And that’s why we’re really worried. We know that a lot of people who died during the pandemic, in long-term care homes, they didn’t necessarily die directly from COVID-19. They died from dehydration, they died from malnutrition, they died because of a lack of care.”

Mike Old, spokesperson for the Hospital Employees’ Union, which represents more than 50,000 health care workers in B.C., said staff absences because of sick calls are about 50 per cent higher in the past week than they were in the previous year.

“Long-term care workers are pushed to the edge. They’re doing their best, but everybody has their limits and we’re pretty close to it now,” he said.

Terry Lake, CEO of the BC Care Providers Association, said his organization has been asking the provincial government to reconsider the single-site order, which would allow a fully vaccinated health care worker to work in more than one location.

Dr. Sinha said governments should consider redeploying other human resources to fill the gap, and that includes the military.

Ms. Mackenzie, the B.C. seniors advocate, said to improve safety in seniors residences, rapid testing should be required for staff every day, but those tests are in short supply.

Roger Wong, a clinical professor in geriatric medicine at the University of B.C., said Omicron is increasing gaps in care and hurting long-term care residents across Canada, but the return of restrictions to visitors in some provinces is also exacerbating the damage of previous waves.

Family members are being denied from filling in with crucial care such as helping residents go to the bathroom, eat or bathe, Dr. Wong said.

“This is not just a nice perk to have, it’s not just, ‘Oh it’s so nice to socialize,’ no, for many of these folks, the visits by loved ones and family is part of their care,” he said.

With reports from Mike Hager and The Canadian Press