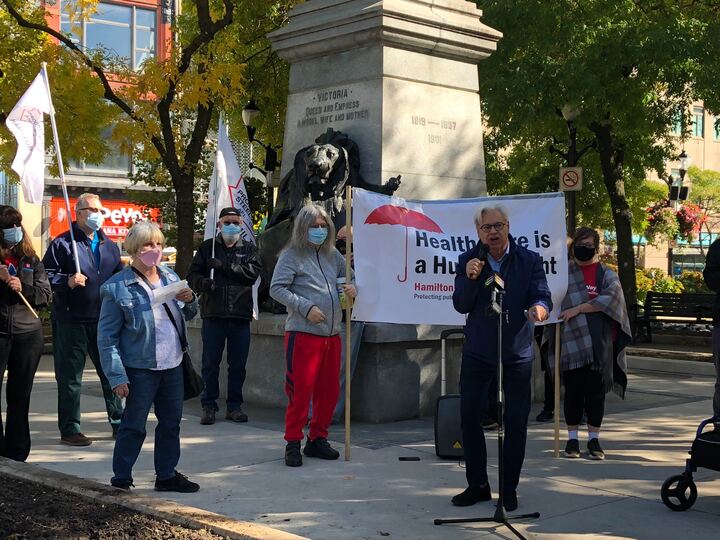 A union that represents staff in long-term care homes has participated in a “day of action.”

CUPE Ontario is stepping up its call for better pay for personal support workers, increased staffing in long-term care homes and an end to the privatization of long-term care beds.

Union president Fred Hahn also says it’s past time for approval of an NDP private member’s bill that would legislate a minimum standard of hands-on care for each long-term care resident in the province of at least four hours each day.

“We’ve been advocating for 15 years, by God, it should be the law of the land,” said Hahn.

CUPE Ontario participated in a series of more than 20 rallies across the province, organized by the Ontario Health Coalition as part of its “day of action,” including a “car caravan” at Hamilton’s Gore Park.

In voicing the union’s call for an end to the privatization of new long-term care beds, Hahn asked, “Do we really want to live in a country where we make money on our parents and our grandparents?”

According to CUPE, almost 2,000 residents and staff have died as a result of COVID-19 in Ontario’s long-term care homes since the start of the pandemic.

At the same time, Hahn says staff have had to fight for access to appropriate personal protective equipment (PPE) and have worked in “crisis-level staffing shortages.”

One of the province’s most devastating outbreaks, taking the lives of 16 residents, was at The Rossyln Retirement Residence in Hamilton’s east end.

The Rosslyn had its licence revoked by the Retirement Homes Regulatory Authority (RHRA) in mid-June.