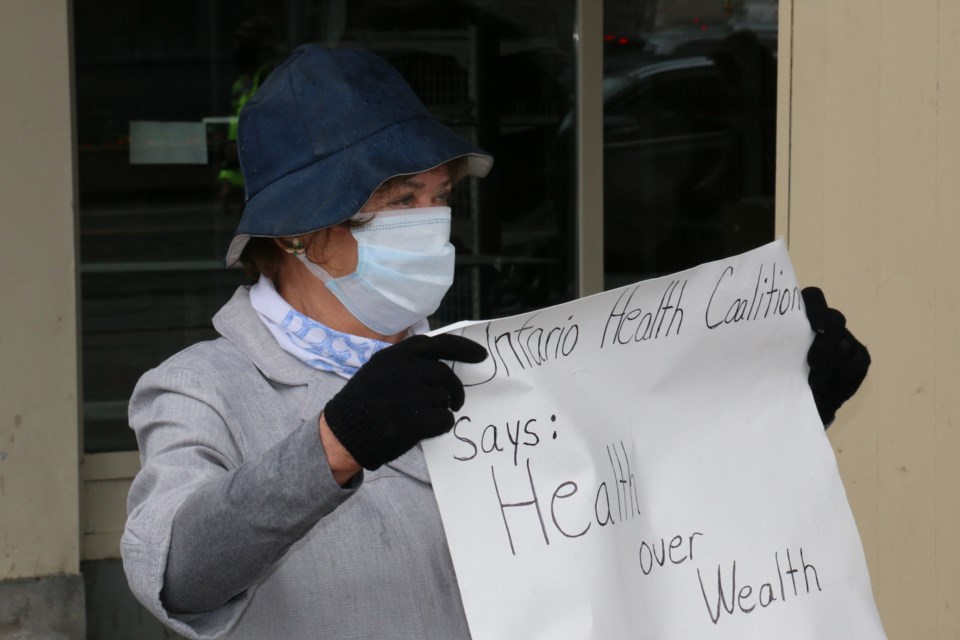 A steady sprinkle of rain in downtown Sudbury didn’t dampen the spirits of a small but passionate group of protesters who believe Premier Doug Ford is steering his government in the wrong direction with Bill 175, known as the Connecting People to Home and Community Care Act, 2020.

The bill is currently up for debate in the legislature and has not yet been passed into law.

The Ministry of Health is calling it a new plan to modernize homecare with a new and innovative model of care. The ministry says this is the first major change since the Home Care and Community Services Act was passed in 1994. Health Minister Christine Elliott said the bill will let the province catch up with all the changes in the past 25 years.

The Ontario Health Coalition (OHC), a group that lobbies for full publicly funded health care, does not agree with the ministry. OHC has taken part in legislative hearings on the bill and has requested the government to withdraw it until more consultation is held.

OHC organized a province-wide rally Wednesday calling on Queen’s Park to have the bill pulled off the table.

Among those who took part in the downtown Sudbury event was Dorothy “Dot” Klein, co-chair of the Sudbury chapter of the Health Coalition. She stood with about 20 others in front of the Rainbow Centre on Elm Street, waving signs at the lunch hour traffic passing by.

Klein said people in health care and the home care community are aware of the changes that might occur with the new bill, but added the public needs to learn more especially now with increasing concerns over COVID-19.

“We really want the public to know more about what it is all about,” she told Sudbury.com.

OHC disagrees with the new approach, saying it will destabilize the current home care system at the wrong time since we are still in the midst of the COVID-19 crisis.

Another concern, according to an OHC policy statement issued last week, is that the bill will dismantle the public governance for the home care system with not enough accountability.The OHC is also concerned with the fact that Health Ontario will be overseeing the program and is taking over funding from the LHINs.

OHC says the Health Ontario management board will be made up mainly of private citizens who are not accountable to the public. Another matter of concern is that the Ontario cabinet will have the right to make administrative changes to the act, without getting approval from the legislature, thus making it undemocratic.

Klein also said OHC will soon be ramping up a Bill 175 awareness campaign in the media and on social media, “because it has been pushed through too quickly.”

Klein said from her experience she is finding too many people are not aware of the nuances of the bill and how it will change how home care is provided, managed and funded to a growing population of older residents.

“I am so glad people are coming out and getting aware,” said Klein as passing vehicles honked their horns.

She said opposition MPPs have argued to have the bill changed without success. Despite that Klein said no one is giving up, especially in Northern Ontario. She said many Northerners live in small towns with poor transportation links and just don’t get sufficient access to any form of health care.

“We want this bill withdrawn. We want to be able to sit down and have proper public input,” she said.