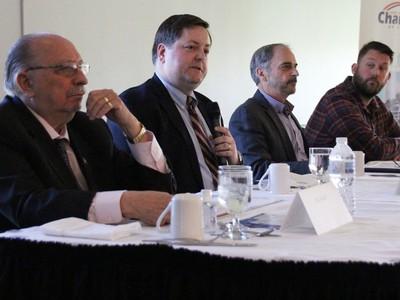 Ontario’s Progressive Conservatives have no plans to privatize the health-care system, says the party’s representative running for re-election in Sarnia-Lambton.

“I want to put to rest this notion by, Oh I won’t say who, but a certain coalition that’s going around saying that we’re go privatize health care,” Bob Bailey said during a Tuesday all-candidates meeting.

“Nothing could be further from the truth,” the four-time MPP said in an apparent reference to the Ontario Health Coalition, which has alleged the Tories are planning to privatize provincial health care and recently launched a campaign to make the province’s investment in long-term care beds for mostly for-profit homes a key election issue.

Bailey noted the budget for Bluewater Health is $40 million more than it was four years ago while hospital projects in Wallaceburg and Windsor-Essex, as well as investments locally in withdrawal management, are evidence his party is committed to publicly funded health care.

“We wouldn’t be spending that kind of money if we were going to privatize,” he said.

The question of health-care funding was central as local candidates sparred during the Sarnia Lambton Chamber of Commerce and Seaway Kiwanis Club of Sarnia-Lambton-hosted debate in front of roughly 50 people at the Sarnia Golf and Curling Club.

“Another health-care question shows us how much people in our community care about this issue,” the NDP’s Dylan Stelpstra said when asked how his party would address challenges, including aging infrastructure, in the this sector.

“We will ensure they are paid well and treated well by getting rid of Bill 124,” he said, referencing legislation that caps wage increases for many provincial workers.

Liberal candidate Mark Russell similarly targeted the wage-cap legislation in his comments, saying the Liberals would add an extra $3 billion to mental-health and addictions spending, and hire 100,000 new nurses, doctors and other health-care providers to help clear surgical and diagnostic imaging backlogs.

“One of the ways we can judge a society is by how it treats people who need it most,” said Russell, a former candidate for Sarnia city council in 2014 and longtime Liberal supporter and campaign worker.

New Blue Party of Ontario candidate Keith Benn, who described his party as the “only truly conservative” choice on the ballot, said they had no intention of eliminating or weakening public health care in Ontario.

Benn told the audience he had to insist on seeing a doctor when looking for treatment in late 2020 for a lump on his neck that was later determined to be cancer.

“New Blue plans to work very hard on reducing costs, perhaps administrative costs for instance, and putting money back into the health-care system and offering more choices in the way of treatments and diagnoses as well,” he said.

A Green Party candidate is expected to be named soon, the local association’s Kevin Shaw said.