TORONTO — Premier Doug Ford says families outraged by negligence on the part of long-term care facilities during the COVID-19 pandemic will still be able to hold the operators of those homes accountable despite new provincial legislation that critics say makes it more difficult for loved ones to sue.

On Tuesday, the Ford government introduced legislation that the province said, if passed, will provide liability protection to workers and businesses in a number of sectors who make “an honest effort” to follow public health guidelines and laws.

But the legislation has prompted outcry from some who say the bill would make it “significantly harder” for residents and families to hold long-term care homes liable for any harm caused by exposure to COVID-19.

Those who take legal action against these facilities will now be forced to prove that there was “gross negligence” on the part of the long-term care provider.

“We are calling for this bill to be defeated,” Natalie Mehra, the executive director of the Ontario Health Coalition, said in a news release issued Wednesday.

“Elderly people in long-term care have suffered enormously as a result of negligence, incompetence and indifference by profit-seeking corporations that have engaged in egregious practices while at the same time paying out tens of millions of dollars a month in profits to their shareholders. This is morally reprehensible.”

Speaking to reporters on Wednesday at his daily COVID-19 briefing, Premier Doug Ford defended the legislation, saying the bill does not prevent families from suing.

“They can continue to sue them and this doesn’t cover them (for) full liability whatsoever. I said the same thing… when they brought this to me. I said, ‘Hey these families have the right to go after long-term care homes that were reckless and careless.’ And they have the right to do that,” the premier said.

“What they were saying if we did it for one group, protect the restaurants or convenience stores, you had to include everyone in the province. But I specifically asked that question. Yes, they can still be sued.” 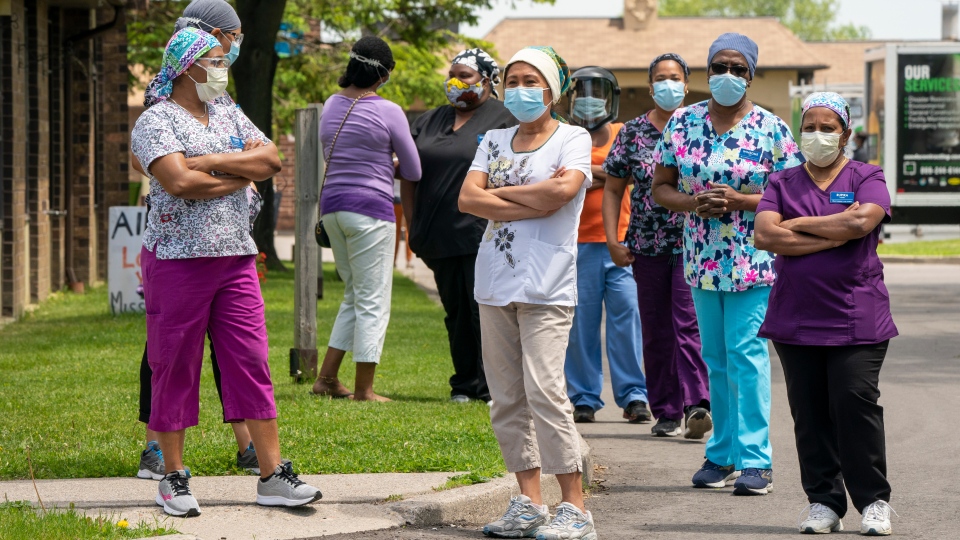 Ford said the legislation aims to protect small businesses from going under due to unreasonable legal action.

“This does not protect the long-term care homes 100 per cent by any means. We were put in the corner in the fact that when convenience stores or other small shops… if you went in there and you said, ‘I got COVID,’ you could put thousands of businesses out of business. And they said you have to do all or none,” Ford added.

Close to 70 per cent of all COVID-19 related deaths in the province have involved residents of long-term care homes and several lawsuits have been launched by the families of loved ones who have died in those facilities.

“The Ford government tabled a bill obviously designed to shield itself and for-profit long-term care corporations from accountability. More than 1,900 people have died in long-term care during this pandemic, shattering thousands of families,” Ontario NDP Leader Andrea Horwath said in a statement released Tuesday.

“Doug Ford didn’t protect them — but is now protecting the very companies that let them die in horrible conditions. I’m appalled at this move to deny families the justice, accountability and day in court they deserve.”

During his news conference on Wednesday, Ford encouraged those currently pursuing legal action against long-term care homes to “continue suing them.”

“They will be held accountable,” he said.