By: Joanne Shuttleworth, The Wellington Advertiser 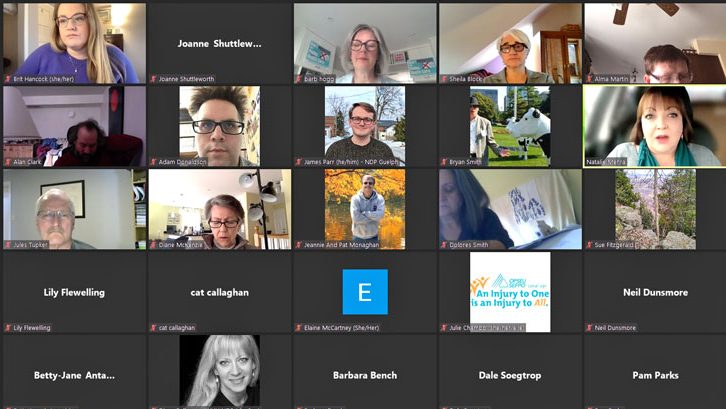 The Guelph and District Health Coalition held an “emergency summit” on April 3 to talk about how health care is under threat of privatization in Ontario. Screenshot from Zoom meeting

She adds the Ford government is slowly, quietly, and with stealth, privatizing health care.

“We need to warn the community about the Ford government’s plan to privatize health care,” Hogg said as she opened the “Emergency Public Healthcare Summit” the coalition hosted online on April 3.

“They are doing it by stealth, which means sneaky and secretive,” Hogg stated. “Forty percent of health care is already privatized.”

The local health coalition is launching a “Fight Back” campaign along with the Ontario Health Coalition and its other members to make sure people understand what they say is at stake if the Conservatives are re-elected in the June provincial election.

Natalie Mehra, executive director of the Ontario Health Coalition, reminded participants of the early days of the pandemic and how long-term care residents and staff were hardest hit by COVID-19.

“There were 4,500 people who died of COVID in long-term care and there are almost 50,000 staff and residents who got COVID,” she said.

“You would have thought the government would have turned over every stone to set clear standards for long-term care homes, but that has not happened.” 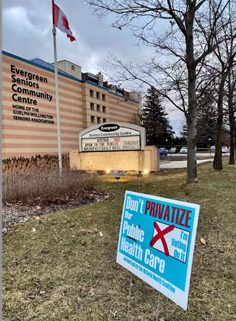 Guelph and District Health Coalition has lawn signs for anyone interested. Screenshot from April 3 meeting.

Mehra noted hospitals are off-loading patients to long-term care homes, and nurses there are offloading patient care to PSWs, who offload care to care aids, who don’t have the proper training to care for elderly people with complex medical needs.

“Nothing has happened at all as a result of this exposure that egregious harm came to people,” Mehra said.

“This was happening way before the pandemic. Now that the curtain is drawn back, we can’t ignore it.”

And it’s not just nursing homes that are under threat, she said.

Mehra listed other initiatives where the province has used private, for-profit health care providers to help deal with the pandemic, including:

Much of home care services are provided by private, for-profit businesses as well.

And still on the table are amalgamation and cuts to paramedic services and public health units.

“I’m not overstating it. I have never felt so strongly that we need to do everything we can to stop it.”

Sheila Block is a senior economist with the Canadian Centre for Policy Alternatives.

She said the argument that the province is broke and has no choice but to turn to the private sector for assistance is just not true.

Block noted Ontario was “richer than ever at the start of the pandemic” and that Ontario currently spends less on health care per person than most of the other provinces.

The province, she said, “is not making the fiscal effort to fund services,” but it could, by collecting revenues it is owed and by not cutting revenue streams like license plate stickers.

“We need to reinvest in health care,” Block said. “We have the capacity to do that.”

She said it will cost an extra $1.8 billion a year, mainly in staffing, to give long-term care residents four hours per day of care – a service level the coalition has long been calling for.

“It sounds like a lot, but it’s one per cent of program spending in 2020. It could be done,” Block said.

She added it’s a good question to put to candidates on the campaign trail.

To draw attention to the issues and drum up interest before the election, the Guelph and District Health Coalition has some lawn and window signs and decals it hopes people will display at their homes or businesses.

The coalition is asking folks to take selfies with their signs and post them on social media, making the signs do double duty in terms of spreading the word.

Hogg also encouraged people to attend all-candidate debates and ask probing questions about health care and what the parties would do if elected.

Coalition members are preparing to visit local farmers markets and other places people congregate to hand out flyers explaining the dangers of privatizing healthcare.

They are also happy to talk to service clubs, church groups, retiree groups or anyone looking for a speaker.