Critics say Premier Doug Ford’s massive overhaul of the provincial health-care system does not address the lack of capacity and services in hospitals, which are already stretched thin 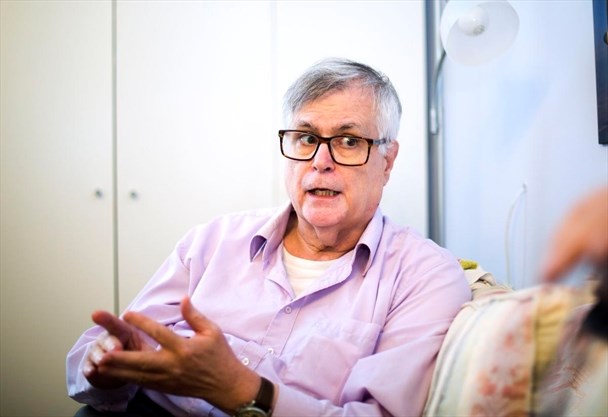 David Hartfield in his Thorold South home, May 23, 2019. Hartfield was recently forced to go to a hospital in Hamilton, spending hours in the hallway before being treated. – Bob Tymczyszyn,Torstar

David Hartfield pleaded to be put in a closet. His blood pressure was dangerously high. The risk of suffering his second heart attack was real.

Doctors at the Hamilton General Hospital were admitting him to the cardiac wing.

But after six hours waiting on a gurney outside the emergency room, a few feet away from the paramedic entrance, wrapped in a cacophony of noise and constantly being jostled, the former air traffic controller had enough.

He said he was one of a growing line of patients moved out of the emergency department into the hallway, waiting for a bed elsewhere in the hospital.

“I was trying to relax and trying to sleep to help bring my blood pressure down,” the Thorold man said.

“But you have these bright lights in the ceiling in your eyes. And even if you nod off, every few minutes someone is bumping into the gurney.”

Unable to rest and with his anxiety rising, Hartfield asked any nurse or doctor who would listen to push his gurney into a closet. It might be cramped, but at least it would be dark and less noisy.

“I told them I would sit in the closet if I had to. I thought even sitting up I could get more sleep.”

Nurses would not put him in a closet.

After six hours in the hallway, he “cracked.”

“I understand now how people can feel like they are going crazy in the emergency room.”

Unable to bear another moment, Hartfield called a local motel and against the advice of doctors, left the hospital.

“When I got to the motel, I took a long bath and immediately started to relax and my blood pressure started to drop,” he said.

“The way I thought about it was, if I had a heart attack, I could call 911 and then I would have two paramedics with me the entire time until they found a bed for me at the hospital.”

Hartfield’s experience falls under the label of “hallway medicine” — now routine in hospitals across the province.

It’s a problem Premier Doug Ford has vowed to fix, announcing a sweeping overhaul of the health-care system that came into effect June 6 under the Connecting Care Act.

An investigation by The St. Catharines Standard and The Hamilton Spectator provides the most comprehensive coverage to date of the health reforms considered the biggest change since Medicare.

Under the plan, a super agency called Ontario Health will be in charge of the entire system from hospitals to community care to organ transplants to cancer care.

It will also oversee dozens of regional groups named Ontario Health Teams that will align health and social service organizations to work together to integrate services and help patients navigate the system.

Health-care leaders disagree about whether the revamp will be the long-sought-after cure for hallway medicine — which describes a situation where a hospital is so overcrowded that patients are queued in the hallways of emergency rooms and wards.

Some are put in unconventional spaces like sun rooms, closets or board rooms. Others don’t even get a bed at all as they wait for discharge in a chair in a lounge.

“I think the whole system is under stress,” Hamilton Health Sciences CEO Rob MacIsaac said, speaking generally about the issue.

“We are definitely operating well over capacity. It does have an impact on our budget. It is very challenging for our staff to deal with these increases in volumes.

“I think the experience for our patients suffers. The whole system starts to slow down and stress levels go up.”

Hospitals have little extra capacity for the overflow after years of cost-cutting due to frozen budgets or increases well below inflation. HHS alone has axed roughly $130 million over the last six years.

“The Liberals left our health-care system hanging on a thread,” said provincial NDP Leader Andrea Horwath, Hamilton Centre MPP. “There is no doubt the hospitals are feeling the squeeze.”

But the Ontario Health Coalition doubts Ford’s plan will put much of a dent in the decades-old issue.

“It does not produce one new doctor or nurse or open a hospital bed or an operating room,” said executive director Natalie Mehra. “It does nothing like that.”

The Ontario Nurses’ Association calls it a “bitter pill” and has launched a campaign urging people to email their opposition to the premier, the health minister and their MPP.

“Tell Doug Ford that hallway care won’t be solved with a beer and a slogan,” states the campaign referring to a number of moves to make beer more accessible in Ontario and the PCs’ fondness for calling themselves the “government for the people.”

The association says nurses “far too often” look after patients in overcrowded emergency rooms, hallways and even utility rooms.

The problem is acute. Wait times are long and resources are stretched thin across the health system, according to the first report of the Premier’s Council on Improving Health Care and Ending Hallway Medicine.

The January report, titled “Hallway Health Care: A system under strain,” says “on any given day in the province, there are at least 1,000 patients receiving health care in the hallways of our hospitals.”

Hamilton’s hospitals had 100 more patients a day on average in February than beds funded by the province. Niagara had 24 and Burlington had 10.

In addition, another 58 patients on average were waiting in Hamilton emergency departments each day to be moved to beds elsewhere in the hospital. In Niagara it was 55 and in Burlington it was nine.

Not all of these patients were in hallways, sometimes extra beds are squeezed into shared rooms or previously unused areas are opened up.

The hospitals don’t get any extra money for these patients, which cost a hospital around $1,100 a day. The money for extra beds comes out of a hospital’s existing budget. By law, they aren’t allowed to run deficits.

“We have the least amount of hospital capacity of any hospital system in the country,” said Michael Hurley, president of the Ontario Council of Hospital Unions, the hospital division in Ontario of the Canadian Union of Public Employees.

“There is no discussion in this plan about adding capacity to meet what is obviously a significant and growing challenge. This is very concerning.”

But simply funding more hospitals beds won’t be enough. The province has already added 100 beds to Hamilton hospitals to combat hallway medicine and 54 to Niagara without coming close to solving the crisis.

The real problem is the bottlenecks that occur because staggering numbers of patients can’t get adequate primary care, home care or long-term care.

“That backup situation in hospitals is the result of not having places to go,” said Paul Johnson, general manager of Hamilton’s Healthy and Safe Communities Department.

It starts in the emergency room when patients with nowhere else to turn go to hospitals for help.

It gets worse when patients can’t be discharged because the services they require are nowhere to be found. A record 5,100 patients were stuck in Ontario hospitals in February, which in medical terms is called alternate level of care (ALC).

“You don’t solve hallway health care without fixing primary care and home care because where are the patients going to go,” said Doris Grinspun, CEO of the Registered Nurses’ Association of Ontario.

ALC creates backups throughout the entire system including cancelled surgeries, lines of stretchers in emergency department hallways, too few ambulances on the road and overflowing wards.

“We have a system that is dramatically out of balance,” said Anthony Dale, president of the Ontario Hospital Association. “The situation is so incredibly serious.”

In Hamilton alone, nearly 300 acute care beds are blocked because patients have nowhere else to go while waiting for other types of care.

The problem is so acute in Niagara that one in four acute care beds is now taken up by patients who should already be discharged. At Niagara Health, 136 patients are stuck in the hospital.

In Hamilton, it’s equivalent to a medium-sized hospital being closed to new admissions because it’s filled with those who should be treated elsewhere.

“I truly believe it’s not always best for those patients to be in hospital,” said Dr. Tom Stewart, CEO of St. Joseph’s Healthcare and the Niagara Health System. “They need a different type of care, they should get it.”

In the fall, the Ontario government announced it would build 6,000 new long term care beds and in March it added 1,157 more. Of those, 952 will go to the Hamilton Niagara Haldimand Brant LHIN, which includes Burlington.

However, there is no list of what long-term care homes are getting the initial 6,000 beds — and the government says that information is not currently available.

If the beds have been allocated, it brings the Conservatives nearly halfway to their commitment to build 15,000 long-term care beds over five years.

“Imagine if I could move 15,000 people out of our hospitals,” said former Hamilton Health Sciences board chair Marvin Ryder. “Think about what that could mean for admissions and the emergency rooms.”

In addition, the PCs have committed to upgrading a further 15,000 long-term care beds to modern standards.

In total, the government estimates it will cost $1.75 billion over five years to build and renovate the 30,000 beds.

The Premier’s Council says in its second report released in June that increased home care and supportive housing are also needed.

Critics, such as former Liberal deputy minister of health Dr. Bob Bell, said it’s a big expense at the same time the PCs have committed to cutting costs.

“If you are going to reduce government spending you have to think about reducing spending on your biggest budget line, which is health.

“And at the same time, they are elected to eliminate hallway medicine.

Health Minister Christine Elliott acknowledged July 15 that it’s not a quick fix and eliminating hallway medicine may take longer than the one year promised by Premier Doug Ford.

It’s déjà vu for Linda Haslam-Stroud who has watched government after government try and fail to fix hallway medicine.

“We’ve been through so many changes and we still haven’t got it right,” said the former longtime president of the Ontario Nurses’ Association.

“The reality is we have an older population, we have more people we’re trying to take care of and when we’re deciding a plan we aren’t looking forward and envisioning what that is going to look like.

“To me, this is just another Band-Aid that isn’t really going to resolve the problems.”