Health care advocates take it to the streets

By Steve Henschel, Niagara This Week 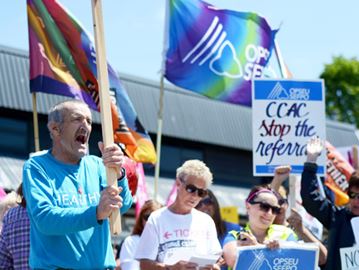 Welland’s Don Huneault makes his voice heard during a rally at St. Catharines MPP Jim Bradley’s office held by the Save Our Welland Hospital campaign and Ontario Health Coalition in opposition to proposed cuts to health care in Niagara and beyond.

ST. CATHARINES — Over 100 people took it to the streets on Friday in defense of the Welland Hospital and health care in Niagara.

The Ontario Health Coalition and Save Our Welland Hospital Campaign banded together on Friday to hold a day of action in front of St. Catharines MPP Jim Bradley’s office. A full busload of individuals from Welland and Port Colborne joined the protest against the proposed closure of the Welland and Greater Niagara General Hospitals in favour of a new hospital to be constructed in Niagara Falls at Lyons Creek and Montrose Roads.

Amongst those in attendance was Wainfleet mayor April Jeffs. She said concern has been growing in her municipality over the proposed site as fears grow that Fleeters will face a long drive to access emergency health care.

“That’s what scares everybody,” said Jeffs, noting the next closest hospital should the Welland Hospital close would be Dunnville, a 40 minute drive for most of those in Wainfleet.

“We don’t win at all,” said Jeffs, who has been joined by other southern-tier mayors Frank Campion of Welland and John Maloney in voicing concerns over the plan.

In 2012 NHS CEO Kevin Smith announced plans to build a new hospital in south Niagara to amalgamate hospital services into one site in south Niagara. Consultations between the mayors of Niagara’s six southern municipalities — Fort Erie, Niagara Falls, Welland, Pelham, Port Colborne and Wainfleet — and the Region yielded two possible sites, one in east end Welland and one in Niagara Falls. After the mayors agreed on the two sites the NHS announced the Niagara Falls site would be the one used. Since then three of those mayors have lost their seats and at least one, former Welland Mayor Barry Sharpe, has called the process a mistake.

Deacon George Henry of All Saints Anglican Church in Dain City was amongst those who spoke at the rally.

“There’s already waits that stretch eight to 10 hours,” said Henry, adding if two hospitals close and only one replaces it waits will increase.

“We’ll have two day waits, it doesn’t make any sense,” he said, going on to accuse the NHS and Provincial Liberals, who have approved the Smith plan, of playing politics with public health.

“We don’t have a public health system, we have a political health system,” said Henry, calling on all of Niagara to join the fight. He added any closure will not only affect those in south Niagara but all those in the region.

“I’ve never seen a region of the province that has faced so many cuts,” said Ontario Health Care coalition executive director Natalie Mehra, adding, “at the end of the day it doesn’t serve anybody in Niagara to have fewer hospitals.”

Save Our Welland Hospital campaign chair Sue Hotte explained the possible closures in Niagara are indicative of a pattern across the province.

“We’re trying to stop all the cuts through Ontario,” said Hotte.

Chief communication officer for the NHS Brady Wood noted however the NHS will be moving forward on public consultation as planning gets underway for the new hospital.

“We’re moving forward with a government approved plan,” said Woods, noting all six mayors in 2012 were unanimous in the two sites selected. He added up until that point the NHS had undergone extensive public consultation and outside professionals including Niagara EMS narrowed the site down to Niagara Falls after review.

“It’s not a decision made lightly,” said Woods, explaining this summer the public will see the NHS rolling out consultation as it moves forward on the new hospital.

“We totally respect the passion of the public,” said Woods, adding, “now we’re going to work with the community to table those concerns.”

He pointed out the NHS has yet to site two proposed Urgent Care Centres that could alleviate concerns of the public especially in regards to travel times and access.

He noted often the specific needs of a community can be addressed without a hospital. He referred to the recent closure of the Niagara-on-the-Lake Hospital where residents were concerned with convalescent beds in light of an aging population. Woods explained the NHS was still able to site 12 such beds in the town with the help of community partners.

He said similar partnerships could deliver on the needs of those in Niagara’s southern tier with the opening of a new hospital. He said moving forward the NHS will be engaging community agencies and the public to identify needs and issues.

“It’s all going to be data-based planning, we’re not going to wing it,” he said, adding a diverse approach could improve service delivery even in light of a closure.

“We’ve got to get creative,” he said.