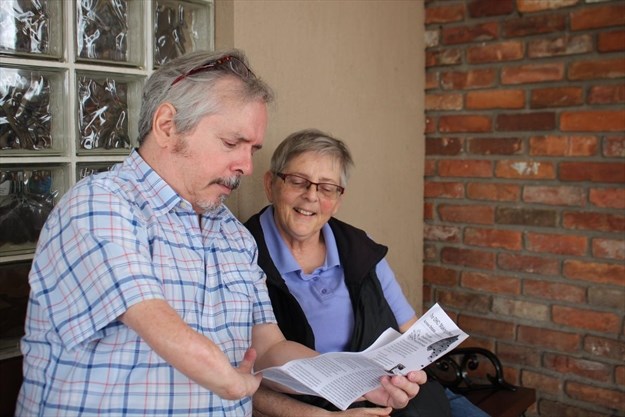 Doug Allan and Sue Hotte from the Ontario Health Coalition discuss plans for a series of debates in Niagara’s provincial ridings on the delivery of health care services. – Allan Benner , The St. Catharines Standard

It will take more than fleeting election promises to resolve the crisis that is brewing in hospitals across Ontario, says Ontario Health Coalition board member Doug Allan.

As people contend with overcrowded hospital emergency departments and lengthy wait lists to access medical services, Allan said “there’s a much broader understanding of the crisis that it (decades of provincial underfunding) has created — and that’s a word the health coalition has not used in the past, but it is just becoming so difficult in so many ways.”

Allan was in St. Catharines Thursday meeting with Niagara Health Coalition board members to finalize plans for a series of provincial election debates focusing on health-care services.

Allan said Ontario’s funding for long-term care and home-care services also lag behind the rest of Canada. And the combined shortfalls are having an impact on paramedic services, too.

“In every direction you turn, whether it’s EMS, hospitals, long-term care, the system is backing up and we need to turn the corner through improved funding,” Allan said.

The provincial budget’s 4.6 per cent hike in health-care spending this year, Allan said, falls short of the 5.3 per cent increase in each of the next four years the health coalition estimates is needed to address that crisis.

“That would essentially cover the actual cost pressures that hospitals are facing from inflation … for aging, population growth and increased utilization,” he said. “There needs to be a movement, and not a one-time movement to bump up funding pre-election — we’ve seen that before — but a consistent policy that we need from all of the parties to re-fund our hospitals.”

Niagara Health Coalition president Sue Hotte said candidates in each of Niagara’s four ridings will be given opportunity to discuss their political party’s plans to resolve the health-care crisis during debates organized in partnership with the Canadian Association of Retired Persons Niagara, as well as local chapters of the Council of Canadians and Retired Teachers of Ontario.

The first is scheduled for St. Catharines on Monday, at Robertson Hall, 85 Church St. A debate for Niagara Falls candidates will take place next Thursday at Gale Centre, 5152 Thorold Stone Rd. A Niagara Centre riding debate is slated for May 23 at Welland Arena Community Hall, 501 King St., and a debate for Niagara West will take place May 24 at Livingston Activity Centre, 18 Livingston Ave., Grimsby.

All debates are from 6:30 p.m. to 9 p.m., and where possible, Hotte said, Liberal, Progressive Conservative, NDP and Green party candidates were invited to participate.

“We can’t have the hallway medicine that we’ve seen. We can’t have people with their heads parked beside a toilet because that’s the only place they can find a bed,” Allan said, referring to a recent incident in Sudbury when a bathroom was used for a patient when no other rooms were available.

“We have to reopen the wards,” he said.