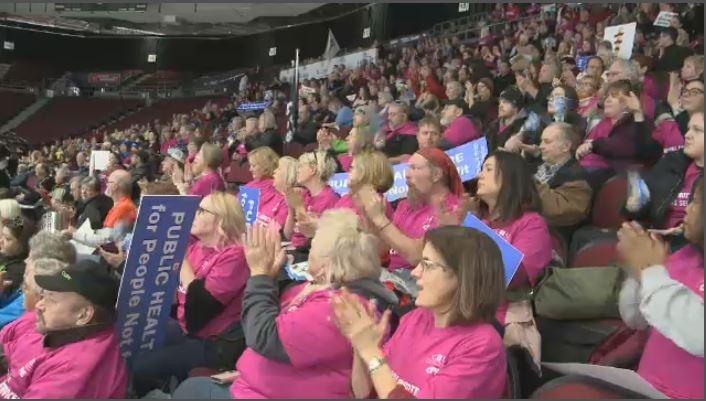 The rally at TD Place featured speeches and music. It was organized by the Ontario Health Coalition and is in response to changes the Ford Government is making to health care across the province; including merging health units and centralizing ambulance dispatch which would eliminate 49 or 59 local ambulance services.

Julia Lynch is a health care professional, “We have to have a voice and we have to make change. And this is the way to do it. We are the voices of people that can’t be here and that’s the importance of being here today.

James Matheson, second vice-president of CUPE 1974, says there is fear and anxiety in the workplace over what will happen. He says, “Everyone is worried. Job loss, what’s going to happen to the departments? How are they going to streamline things?”

Several other rallies by the Ontario Health Coalition have taken place in recent months in other cities.

Sara Labelle came from Oshawa to support workers. She says, “Since there is no democracy at Queens Park, we are here to send a democratic message as the people of Ontario”

The rally takes place the day after Ontario Health Minister Christine Elliott was in the capital to announce Ottawa’s Health Team.

in a statement to CTV News, a spokesperson for the health minister says.  “It’s unfortunate that the Ontario Health Coalition has chosen to spread misinformation as our government works to build a modern, connected and sustainable public health care system…As Minister Elliott has repeatedly stated, both in her announcement of the People’s Health Care Act and at numerous other times in the legislature, our government is taking the necessary steps to strengthen and fix our public health care system, including by making significant investments this year to expand patient access to publicly-funded services. “