By: Sara McCleary, Sault This Week 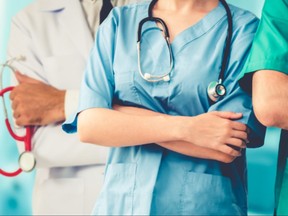 In response to changes by the Ford government to the province’s health care system, the Ontario Health Coalition and its regional affiliates are taking large-scale action.
The OHC organized a total of 16 press conferences in cities across the province over the last week to raise awareness of the changes Premier Doug Ford has already made and plans to implement in the future. One of the organizers’ main concerns is the Progressive Conservative government’s intention to allow privatized healthcare in Ontario.
“Hospitals, clinics, long-term care facilities, and community health care services are now well on their way to becoming private businesses that can charge extra fees to clients while still getting provincial funding for health care services provided for clients, residents, and patients,” Dot Klein, co-chair of the Sudbury OHC chapter, told Sault This Week.
“People who cannot pay the extra fee do not get the healthcare services. This results in two-tier health care.”
Public healthcare in Canada, as designed by Tommy Douglas in the 1960s, was a single-tier system which intended that all Canadians would have equal access to quality healthcare, paid for by government sources with no added fees for the patient, she added.
The OHC is also speaking out about the Ontario government’s privatization of long-term care, privatization of home care, privatization of COVID testing and vaccines, and Ford’s refusal to deal with staffing shortfalls.
“The Ford government canceled most of the monitoring systems that the provincial government has put into place, especially concerning long-term care,” said Klein. “Additionally, the operating funding from the provincial government has remained stagnant, which has seriously affected the wages and working conditions of the front-line worker, making it harder and harder to attract and retain front-line workers such as RNs, RPNs, and PSWs.
“Front line workers are not making living wages while risking their lives and the lives of their families as they work without proper supplies to give personal care to patients, clients, and residents during a fatal global pandemic,” she said.
Northeastern Ontario job vacancy rates for those positions went from 6.8 per cent in 2020 to as high as 18 per cent in 2021, Klein pointed out, adding, Bill 124 froze health care worker wages despite the pandemic increasing workloads.
Volunteers with the OHC across the province have banded together to raise awareness of the “threat” posed by these changes.
“The thousands of OHC volunteers are united in solidarity that the voters must be fully aware of what is at stake on June 2, 2022,” said Klein.
“Many have taken the Ontario public health system for granted. Our public health care system that we have enjoyed and benefited from for the past 55 years in Ontario could be gone or destroyed before the end of 2022 because Ontarians did not realize its value in our society and did not fight to keep it alive and well.”
The Health Coalition affiliates hope to rally Ontarians to stand together and ensure Ford knows they do not want these changes to be made to the health care system.
In addition to the press conferences, rallies are being planned, including the possibility of one in Sault Ste. Marie. Klein said supporters can also help by putting up signs on their lawns or cars, hanging posters in their workplaces or on public bulletin boards, and talking to their neighbours, families, and friends.
Klein has been a nurse for 57 years, starting before OHIP was implemented, “when Tommy Douglas was running around Canada trying to convince people about the need for public health care,” she said. She remembers when people in need of health care would be turned away because they couldn’t pay, so she hopes Ontarians will step up to defend Tommy Douglas’s vision.
“Ford has crippled the public health care system in Ontario to the point that no one will oppose his plan to deliver the final blow and kill the Ontario public health care system,” said Klein. “If the Ford government wins the provincial election in June 2022, the PC government will believe they have the mandate to bring the final blow to public health care.”