A coalition of health experts is vowing Tuesday to defend Ontario’s public health care system from further privatization, days after the provincial government confirmed “all options are on the table” to address an ongoing health-care staff shortage.

The announcement also came as the Ontario Nursing Association once again spoke out against the wage-capping Bill 124 at Queen’s Park, while new details emerged about how much busy hospitals are spending on nurses from private agencies.

“We will fight them with everything that we have,” said executive director Natalie Mehra at a morning news conference.

“Everything is on the table to defend our public, not-for-profit health care system. We will not allow — without a major fight — the for-profit privatization of Ontario’s hospitals.”

Last week, the Ford government said it’s considering various ways to deal with health-care staff shortages that have led to emergency departments across the province closing for hours or days at a time.

Sylvia Jones, the new health minister, has provided few specifics about what that could look like but said in question period recently that Ontarians will not have to pay out of pocket for health-care services.

Mehra says the OHC wants clarity and transparency about exactly what services might be privatized, and what companies the provincial government will use to provide these services.

“We do not need bold new experiments with for-profit privatization,” said Mehra.

“We need a government that is committed to governing, to actually improving the public health care system.”

Use of agency nurses on the rise

Nursing is emerging as one place where private companies are already getting involved in hospital operations.

The University Health Network (UHN), which operates Toronto Western hospital, provided five years worth of data surrounding its use of nurses from 11 different private agencies to CBC Toronto.

In 2018, it spent just over $1 million to hire nurses from various agencies to support work in emergency departments and intensive care units.

It actually spent less per year over the next three years but the figure has spiked in 2022.

This year, UHN said it has spent just over $6.7 million on agency nurses. More than $4 million of that spending was tied to hiring private nurses to work in its ICU.

UHN also released data about its efforts to hire and retain full-time nurses. At the end of July, the hospital network said it had hired 604 nurses, but it had also lost 331 by late June.

UHN said since the start of the year, the network recorded over 1,000 vacancies. CEO Kevin Smith said there’s currently about 600 active vacancies — nearly triple what it normally has.

“University Health Network… looks after some of Canada’s sickest people and simply can’t not be available for urgent care and emergencies,” he said.

“The solutions at the moment have had to include agency nursing.” 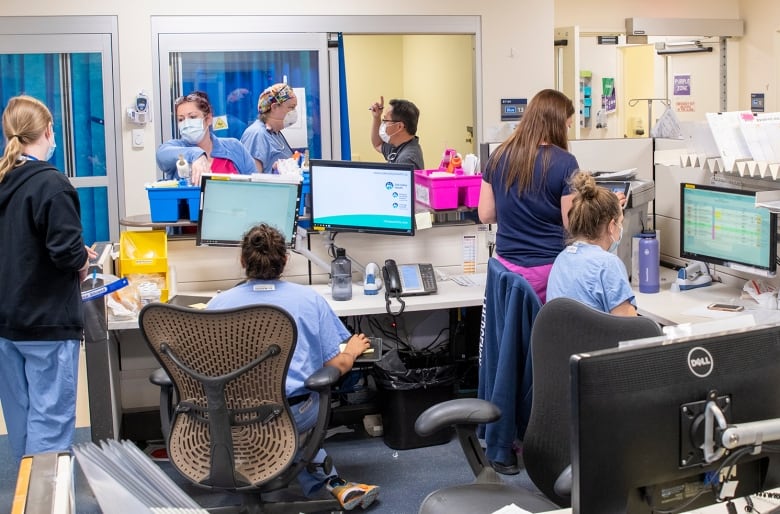 Sunnybrook Hospital released similar data around the use of agency nurses, which was also published in an investigation by the Toronto Star on Tuesday. That hospital has seen a steady increase in spending on private nursing, with the annual totals climbing from $4.5 million in 2018-2019 to $8.2 million in 2021-2022.

Hoy said the government should pass a bill limiting how much hospitals can spend on agency nurses.

Ford told reporters last Friday that while he can’t dictate what private companies pay their employees, the government will take care of workers on the front line and continue “putting in billions of dollars” into the health-care sector.

Dr. Dick Zoutman, the former chief of staff of the Scarborough Health Network and a professor at Queen’s University and the University of Toronto, says private clinics threaten to siphon off skilled health care workers from the public system and make staff shortages even worse, and could also erase an important part of Canada’s identity.

“We should be very proud of our hospitals and our publicly-funded health care system,” said Zoutman.

“To think that we would then throw that away for a for-profit money-making model just goes against the grain of what Canadians hold dear and our value system in this country.”

Zoutman says instead of privatizing services, the province should expand them.

“We have worked very, very hard to make our hospitals as effective and efficient as possible,” said Zoutman, noting that Ontario has the lowest cost per inpatient stay and the shortest length of hospital stays in the country.

“I worry we may have gone too far.”

Link to original article with video