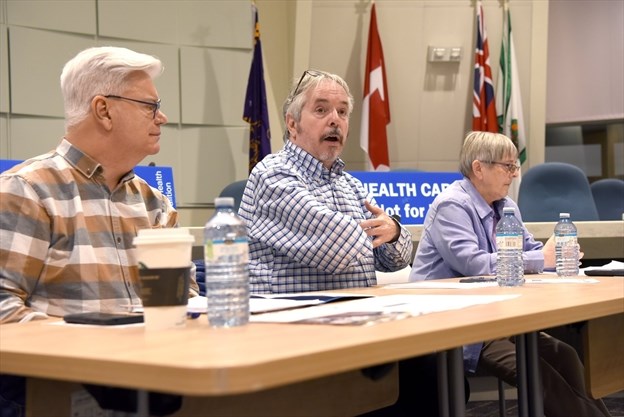 Despite ever-present concerns swirling around the future of the West Lincoln Memorial Hospital, there was only a small contingent of Grimsby residents gathered at town hall on Thursday night as the Ontario Health Coalition continued its tour through Niagara, drumming up opposition to Doug Ford’s proposed Bill 74.

Representatives from the coalition wrapped up a week of town halls in Niagara on Thursday night, all aimed at drawing attention to proposed changes under the omnibus health bill that effectively eliminates the system of local health integration networks in favour of consolidated oversight in Toronto via an Ontario Health board and the minister of health. While the Ford PCs have pitched the sweeping legislation as a means to eliminate bureaucratic spending in the health-care system, the health coalition views the bill as the thin edge of the wedge to drive restructuring and increasing privatization of services.

“Instead we got more restructuring, more privatization,” said Allan, who raised concerns over the composition of the new Ontario Health board.

“There’s a very heavy dose of corporate Canada on that board,” said Allan. He went on to say Ontarians can likely expect the same sort of top-down restructuring of their local health-care delivery that came under the Mike Harris government of the 1990s.

Perhaps more troubling, he said, is the prospect of integrated family health teams serving as the primary point of service delivery across populations of 200,000 to 300,000. While the Conservatives have billed those changes as a way to restore localized control to health care, Allan said single pools of resources for each integrated team will see corporate and public interests fighting over limited resources.

“This is all part of a bigger picture of attack on small hospital rural health care,” said Allan.

CUPE Ontario president Fred Hahn spoke to the issue, cautioning residents against the legislation’s wording, replacing a commitment to public health care with a commitment to sustainability and value.

He was quick to push residents into action, notably participation in an April 30 rally at Queen’s Park.

“It is actually possible for us to stop some of this,” said Hahn, who noted that the voice of Grimsby residents, in a PC stronghold riding, has increased clout with the ruling party.

“We’re committed to protecting our publicly funded health-care system,” he said, placing the blame of shortcomings in health care on the local health integration networks established by the previous Liberal government.

Currently, private enterprise handles a variety of services rolled into the Ontario health system, ranging from janitorial services to laboratory testing. Oosterhoff didn’t say if he supported the placement of for-profit enterprise in the larger publicly-funded system, but did say the bill won’t see any further services and work handed over to private companies focused on turning a profit.

“I don’t believe this is going to lead to privatization,” said Oosterhoff, who addressed the concerns related to a lack of local control, touting the proposed creation of Family Health Teams as a point of single-stop care as an increased means of localized input and control.

He said the government’s commitment remains to move forward on a new West Lincoln Memorial Hospital, despite the bill.