‘This is like the Mike Harris era of restructuring, writ huge’ 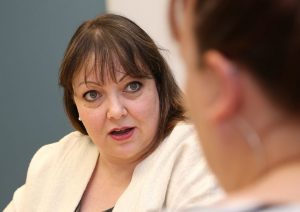 The pain of a provincial health-care shakeup could be particularly felt in the North, according to critics of the Ford initiative.“Mergers for the North don’t work,” says Natalie Mehra, executive director of the Ontario Health Coalition. “The plan is take 1,800 health service providers — hospitals, long-term care, palliative care, air ambulance, laboratories, all of it — and merge them into giant conglomerates. That model of health care does not work for a widely dispersed population over a giant geographic area.”

Mehra was speaking via media teleconference, along with Ontario Nurses Association president Vicki McKenna.“This is like the Mike Harris era of restructuring, writ huge,” says Mehra. “It’s the most radical restructuring this province has ever seen.”

Mehra says her organization is concerned the new legislation allows for a major erosion of public medicare, with numerous services targeted for privatization.
Bill 74, enacted last Thursday at Queen’s Park, provides the Ford government with “unprecedented powers to order the privatization of virtually any part of our health-care system,” she warns.

Mehra says the government is cutting “half a billion dollars from OHIP services, cutting public health and restructuring to centralize it,” as well as “cutting and restructuring and privatizing land and air ambulance services.”

Hospitals also are facing unsustainable budget constraints, she notes, with funding levels held below the rate of inflation.
“We are hearing from thousands of chronic pain patients who are concerned they are going to lose access to the shots that keep them off opioids,” she says. “We’re hearing from parents of children with autism. We’re hearing from people with Crohn’s and colitis concerned about cuts to colonoscopies.”

Fears are at an “all-time high” across the province, she claims, “and we are extremely concerned that there are plans being made in the back rooms of Queen’s Park to privatize significant parts of our health system.”

McKenna, whose union represents more than 65,000 registered nurses and health-care professionals, says her members are concerned for their jobs and workloads, but above all “for the patients they care for.”

She says Ontario is following a path that hasn’t proven effective in other countries and provinces that have attempted similar reforms.
“Jurisdictions that have gone under massive transformation like this have not fared well,” she claims. “And it’s the people who haven’t fared well.”

Restructuring attempts in the United Kingdom and Australia, for instance, have failed to the extent that “now they are making a U-turn and coming back to what is a fully public system,” McKenna notes.

The ONA president worries Ontarians aren’t grasping the looming crisis in health care as keenly as they should because they are being “distracted by populist announcements,” such as buck-a-beer and the ability to have tailgate parties.

“Those are the things that are capturing the attention of the media,” she says. “And I’m afraid the public services that people all depend upon won’t be there when they need them.”
McKenna says a 4.5 per cent budget increase would be required for hospitals to simply “keep the lights on, doors open, and maintain staffing levels — and they didn’t get that.”

She says she wants to see public dollars used wisely and efficiently, but hospitals have been “starved” for far too long. “And if they continue to underfund them, they cannot continue to operate. It’s like destruction by design.”

Public health is also taking a huge hit, with funding slashed by more than a quarter and health units to be trimmed from 35 to 10, Mehra points out.
“That means the local public health units will be merged, and one big consortium of services for all of northeastern Ontario or all of Northern Ontario,” she warns. “Services will be centralized, dramatically.”

A leaked plan to privatize air ambulance and laboratories would also be disastrous for our region, she predicts.
“It’s a model that will absolutely never work for Northern Ontario,” she says. “I think the impact on the North, with this idea that centralization is the way to go, is particularly damaging.”

The health coalition is planning a massive rally at Queen’s Park for next Tuesday.
Mehra says it is not too late to stop the overhaul of health care if enough people raise their voices.
“We have done it before,” she says. “We stopped a lot of these types of initiatives, like trying to privatize air ambulance, MRIs and CTs, under (Mike) Harris.”