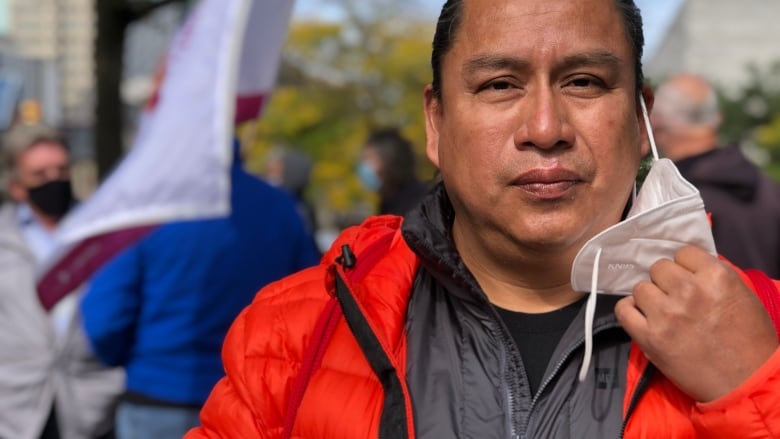 Crescencio Resendiz, a personal support worker for a Revera-run home, has not been back to work since contracting COVID-19 in January 2021. (Julie Ireton/CBC)

As the Ontario government steps up efforts to recruit more long-term care workers, some current and former staff members say they’re still struggling to cope with physical and mental trauma from the past 19 months of the COVID-19 pandemic.

The province announced Wednesday it is setting aside up to $270 million to hire more than 4,000 long-term care workers by the end of the fiscal year.

Hiring new recruits won’t fix complex problems that have been put under the spotlight during the COVID-19 pandemic, workers told CBC News.

And at a rally organized by the Ontario Health Coalition to highlight continuing problems in long-term care, those already on the front lines expressed the pandemic has pushed them to their limit.

“You feel helpless and hopeless,” said a registered nurse who has worked in the sector for 40 years, and is currently employed at a home run by Sienna Living in eastern Ontario.

She said she spent a month in hospital with a severe case of COVID-19 last year, which included a couple of weeks in intensive care.

“I remember them saying ‘double pneumonia’ and I had blood infections … and every system of my body, I guess, was attacked,” said the nurse, who spoke to CBC on a condition of anonymity due to fears of backlash by her employer. 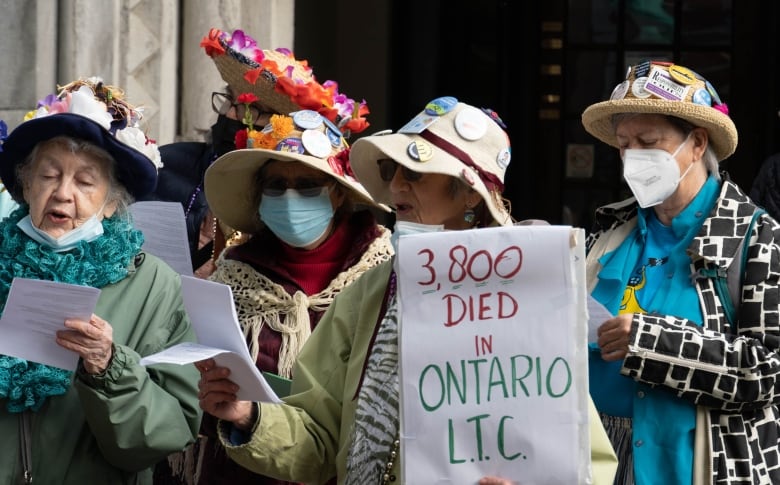 The ‘Raging Grannies’ protest against the conditions in Ontario’s long-term care homes at a rally in Ottawa this week. (Jean Delisle/CBC)

Plowing through feelings of anger

Still fatigued, and sometimes short of breath, she says she went back to work too soon.

“We knew our buddies needed us. … Now PSWs are working double shifts. The workload is intense because we’re so short of staff. But they don’t want us to say that. Trying to get new people is so hard.”

Outbreaks are now rare in long-term care and retirement homes, but under-staffing, constant overtime, and caring for sometimes acutely ill residents continues to be a common occurrence that takes a toll, even without the fear of COVID, according to other workers who spoke to CBC.

“You just kept plowing through feelings of anger … Feelings of sadness because you felt like you couldn’t protect everybody,” the Sienna nurse said.

The effects of COVID on her and her colleagues have varied from constant migraines to chronic rashes to flashbacks.

The workers said they want to see more full-time, permanent jobs, better wages and benefits promised by the Ontario government.

In Ottawa alone, close to 1,000 long-term care home workers have contracted COVID-19, according to data from Ottawa Public Health.

Some, including personal support worker Crescencio Resendiz, have not returned to work.

Resendiz, who works at a home run by Revera, contracted the virus last January during the second wave and still suffers from symptoms.

“It gets very difficult sometimes,” he said, breathing deeply.

“I’m still aching every day. Prior to COVID, I didn’t have any eye problems but since COVID, now I have a chronic eye infection, and what is really bad, I feel so much pain and I get headaches that are terrible.”

Resendiz also said he hasn’t received any financial help from the government or his employer for months.

Speaking at the rally this week wearing an N-95 mask, which he could not secure at the height of his home’s outbreak, Resendiz sounded defeated.

A native of Mexico, Resendiz points out he works alongside other newcomers to Canada. Some are afraid to question managers when they see conditions that are unsafe for workers or residents, he said. 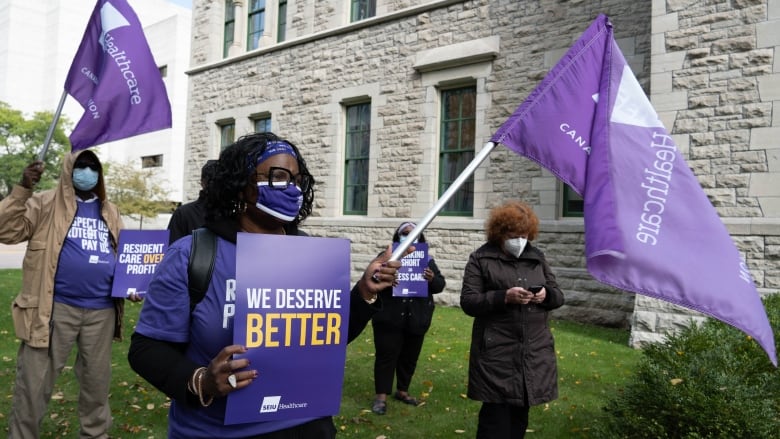 Fiona Bailey, second from left, and other long-term care workers protest at the rally. (Jean Delisle/CBC)

While health keeps Resendiz from returning to work, a nurse who contracted COVID at another Revera home says she couldn’t stay in her job.

The RN has worked in care homes and hospitals across Ontario, she said, and recently left Revera, but she doesn’t want her name revealed so her comments don’t affect her employment prospects.

The nurse says she suffered from COVID at home for a month before she returned to work.

“I was sleeping day and night, heavy, heavy, heavy chest. I had the cough. I had nausea and I had the diarrhea. I had no sense of smell, no taste. The severe headaches,” she recalls.

She blames the home’s management and lack of provincial oversight for letting the situation get so dire early in the pandemic.

“There was no cohorting, no isolation, and then when we started to have some patients that had some respiratory symptoms starting to show up near the end of March, still, things never changed,” said the nurse, who decided after her recovery she couldn’t work there anymore.