Jonathan King tried to get a health card at least half a dozen times, but kept getting turned away 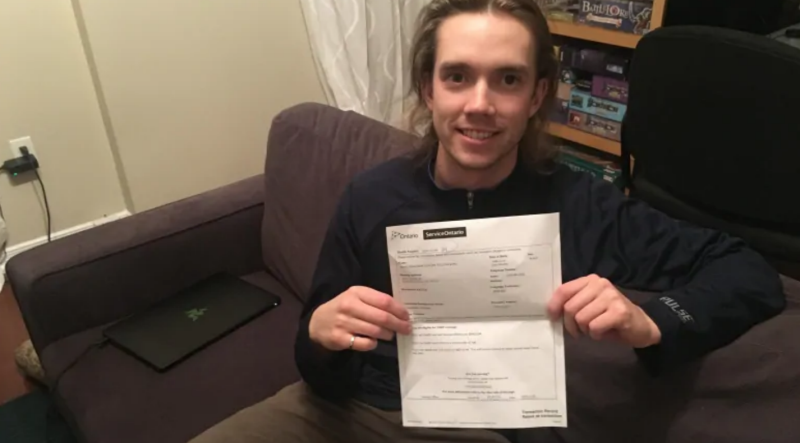 Jonathan King spent a year and several visits to Service Ontario before getting his health card. (Submitted )

A Toronto man has a story to tell about red tape in Ontario after he was unable to get a provincial health card for almost a year, despite trying at least half a dozen times.

Jonathan King, 22, says his problems stemmed from moving to British Columbia for university four years ago. In that time, he let his OHIP card expire.

Just before moving back to Ontario, he tried to get it renewed. Instead, the Service Ontario worker took it away from him, saying he wasn’t a resident of the province anymore.

“I had no idea this would be an issue,” King said.

During at least six attempts to get health insurance after moving back to Ontario that spring, he was rejected for several reasons.

King said he was turned away because he was told he needed to bring school transcripts to show he had gone to university outside the province, or that he should try and switch over his driver’s licence first, or that a bank statement he brought showing his Ontario address wasn’t the right one.

“I was very confused,” he said. “I don’t know why they put so many roadblocks in my way.”

Ontario generally requires someone to live in the province for three months before being eligible for an OHIP card, though King said he tried several times after his three-month mark without luck.

“There are arbitrary, bureaucratic restrictions with the government that prevent Canadians from accessing something that we boast about as a country,” he said. He was finally successful this week, but although he said he was “relieved,” he is “still frustrated” it took this long.

Before this week, he had to pay out of pocket for a doctor’s visit and an x-ray.

It didn’t cost him much, but he said he is lucky because he has a job. King also pointed out Service Ontario locations are typically only open during working hours, and he’s lucky he has a flexible employer.

That, and he’s young and healthy.

“If I had an accident, I would be screwed,” he said. “There’s probably a lot of people who actually have health issues that require things to be paid out of pocket, or have to take medicine regularly, like diabetes.

Natalie Mehra, executive director of the Ontario Health Coalition, a healthcare advocacy group, doesn’t get a lot of complaints about citizens struggling to get a health card, but King’s situation was “ridiculous,’ she said.

CBC News asked the ministry Tuesday to explain why King faced so many difficulties getting a health card, and how common it is for cases like his to happen.

The ministry responded Friday with a brief written statement saying a person’s eligibility is “assessed on a case-by-case basis” based on its policies.