How to end hallway medicine, Part 1: Understanding the crisis

ANALYSIS: Ontario hospitals don’t have enough beds, and patients often end up on stretchers in hallways — sometimes for days. So who’s to blame? 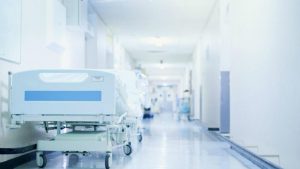 Patients who’ve been assessed, triaged, and stabilized but can’t yet leave the hospital remain in the emergency room because there is nowhere else to send them.

This is the first instalment in a three-part TVO.org series on hallway medicine in Ontario. Watch for Part 2 on Thursday.

Last month, TVO.org investigated the problem of emergency-room wait times in this province. Though I’d always had an interest in the topic, I felt moved to write about it after my young son fell and broke his clavicle. The bone was, to put it mildly, quite obviously broken. Even the triage nurse at the small hospital I took him to, the closest to one our cottage, agreed. But, because of low staffing levels and an unusually high volume of patients, my injured son didn’t receive meaningful medical care during our six-hour wait. We eventually left, having not received care — and we weren’t the only ones to walk out of that jammed waiting room. Later that day, my wife drove him to a different hospital, where he immediately received the treatment he needed.

In the series, I looked at three perspectives on the problems that Ontarians seeking emergency medical care face. I spoke to paramedics, to emergency-room nurses, and to emergency-room physicians. My goal was to understand how an ER functioned. I wanted to understand what was working well and what was working badly in our system. It is not my intention in this new series to reiterate those findings at length. Instead, over the next three days, TVO.org will take a closer look at one issue that came up again and again during the reporting for the last series: the problems in our emergency rooms are, in many ways, symptoms of a much bigger problem, one that affects the entire province. Simply put, the hospital system is far too small to handle Ontario’s population — and the situation will only worsen as that population ages.

It is important to restate in general terms what I reported last month regarding how an emergency room functions on a day-to-day basis. When a patient arrives, whether under their own power, brought by family or a friend, or ferried by ambulance, they are seen by a triage nurse as soon as possible. All patients are triaged on an equal basis; arriving by ambulance confers no advantage. That triage nurse — or nurses, plural, in larger facilities — assesses patients and determines in what order they should be seen. The available medical staff works their way down the list of prioritized patients prepared by the triage nurses. Other nurses monitor the conditions of the patients awaiting treatment, managing their pain and symptoms as much as possible. If a patient begins to deteriorate rapidly during their stay in an emergency room, their priority will be changed accordingly. Patients may not always seem to be receiving any direct care, but that can often be explained by unavoidable wait times for the diagnostic tests required to establish a firm diagnosis.

(It is universally agreed that some of the patients who seek care in emergency rooms don’t really need to be there and that their medical needs could be met by a family physician, a walk-in clinic, or an urgent care centre, where those are available. There are many varied and complicated reasons that a patient would choose an ER over any of these options; they are outside the scope of this series, but I did want to acknowledge that and note that every professional I spoke with for last month’s series agreed that this was a major issue.)

After patients are treated in an emergency department, many of them can go home. They require no further medical care, or at least not any more right then and there. A patient with a broken bone will have it X-rayed, set, and put in a cast and be sent home with orders to take it easy. A patient with a bad cut will have it cleaned, sutured, and bandaged and be sent home. A patient with an illness will be prescribed a medication and march off to the nearest pharmacy to pick it up, perhaps along with some chicken-noodle soup. Once they are out of the hospital, the medical incident is closed, and they pose no further challenges for the hospital system.

But then there are the other patients.

Many will require further treatment in a hospital. The job of the emergency room is to triage them, diagnose their injuries, and keep them alive and stable. Tackling complicated medical crises over the medium to long term is not the intended purpose of an emergency room. In an ideal scenario, a patient with a critical injury or illness will pass through an emergency room relatively quickly before being transferred to the specialized unit in the hospital best able to care for them. Even in less dire situations, a patient who is not in critical condition may require ongoing care in a hospital setting while they recover or undergo additional tests. Those hospital stays can last days — or months. In some cases, patients are never able to go home again.

Such patients do not require a bed in an emergency ward. But they often stay there, sometimes on stretchers in hallways or dragooned staff rooms. Sometimes they stay there for days.

This is what we call “hallway medicine.” It’s a major problem. Last month, the people I spoke with repeatedly flagged it as a chronic issue in Ontario’s emergency rooms. Patients who’ve been assessed, triaged, and stabilized but cannot yet leave the hospital remain inside the emergency ward because there is nowhere else to send them.

This is the broader problem threatening the sustainability of health care in Ontario: a lack of hospital beds, system-wide, is creating bottlenecks.

But the problem is more complicated even than that. Obviously, if a patient is kept in an emergency ward because there is no bed for them in an intensive-care unit, you could reasonably conclude that there was a problem in the ICU. But that’s not necessarily the case. What I have actually learned while studying the issue is that the bed shortage is such a chronic system-wide problem that, while the intensive-care unit may be ready to release many of the patients it’s currently housing, there is nowhere for them to go.

There’s no typical case in the health-care system: every patient’s experience hinges on their own unique circumstances, as well as on the circumstances and capabilities of the facilities where they seek treatment. But allow me to describe a hypothetical example that demonstrates the problem. Imagine an elderly gentleman, otherwise healthy, who is injured in a car accident. An ambulance carries him to an emergency ward, where he is triaged and stabilized. He is transferred to another unit in the hospital for surgery.

After the surgery is complete, he is kept in an intensive-care unit for several days for monitoring and support. After that, he is sent to a rehabilitation hospital, a specialized facility, typically affiliated with a primary-care hospital, where he can receive necessary care while also working to regain his strength and independence. After a spell in the rehab hospital, doctors determine that he’s made insufficient progress and so cannot return home and care for himself. He is sent to a long-term-care facility, where he will likely spend the rest of his days living as independently as possible while receiving the support he needs.

As this case illustrates, moving a patient out of a hospital requires a series of moves from one unit to another. He starts in emergency, spends time in the ICU, goes next to a rehab hospital, and finally ends up in a long-term care facility. In a perfect world, the timing of each of these moves would be determined by his medical situation, and the bed he’d once occupied would be immediately cleared for the next patient.

But in our system, which is stretched well beyond its capacity, it’s all too likely that, at least once in this imaginary man’s treatment, he will not be able to transfer to an appropriate ward or facility because there simply is no bed available for him. His delays cause delays for others. And so on.

There is an easy (if expensive) solution to this problem: dramatically expand the number of hospital beds in Ontario. How dramatically? In 2015, the Ontario Health Coalition examined numbers published by the Organisation of Economic Co-operation and Development and noted that Ontario was well below the OECD average for hospital beds per 1,000 residents. The-then OECD average was 4.7 beds per 1,000 residents. The Canadian average was 2.7. Ontario’s was 2.3. All these stats vary slightly by year, but taking the 2015 figure and applying it to today’s population leaves Ontario with approximately 34,000 beds in total. (These numbers are all approximate, but they illustrate the scale of the challenge.) Ontario would need to add more than 4,000 beds just to reach the 2015 Canadian average. Hitting the OECD average would mean adding more than 35,000 beds — a literal doubling, and then some, of the current system.

Considering Ontario’s fiscal constraints, and the already massive percentage of total provincial spending taken up by health care, that is obviously not going to happen. Simply hitting the Canadian average would itself be a challenge.

But Doug Ford’s Progressive Conservative government says it has a specific plan that targets a very important part of this crisis in the system. And that’s what we’ll discuss in Part 2.