Hundreds at Health-Care Rally: ‘Political choices … and they can be changed’

From public health to paramedics, calls for more — not less — funding from the provincial government for a range of health-care services dominated a Saturday rally at TD Place arena. 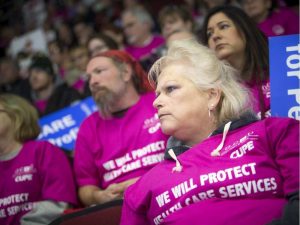 The Ontario Health Coalition and the Ottawa Health Coalition held a rally Saturday at TD Place arena to express opposition to health-care cuts being considered or already implemented by the provincial government. (Ashley Fraser / Postmedia)

It was the last in a series of rallies organized across the province by the Ontario Health Coalition, an umbrella group comprising more than 400 member organizations. Natalie Mehra, the coalition’s executive director, said they were primarily protesting measures they believed the province was planning to implement or had already implemented: public health funding cuts and health unit amalgamation; funding cuts to hospitals and long-term care; and eliminating some local ambulance services.

“These are political choices, not necessities, and they can be changed,” Mehra said. “We cannot cut our way to prosperity.”

Ottawa public health nurse Christa Poirier was one of the several hundred people who attended Saturday’s rally. She said the provincial government’s plan to scale back its public health funding and amalgamate 35 health units into 10 was “very frustrating,” for the health workers affected and for the public.

It was a question also on the minds of Rachael Moutoussidis and Catherine Larocque, nurses at the Queensway Carleton Hospital and The Ottawa Hospital’s General Campus, respectively,

Ford’s current plan “is not going to work, it’s not realistic,” Moutoussidis said.

“We’ve seen over the past few years increases in our ratios, unsafe care. Sometimes we can have 10 to 12 patients and we can’t even provide the basic levels of care,” Larocque said. “Professionally we worry about our licenses, we worry about our patients’ well-being, and it causes incredible amounts of stress.” 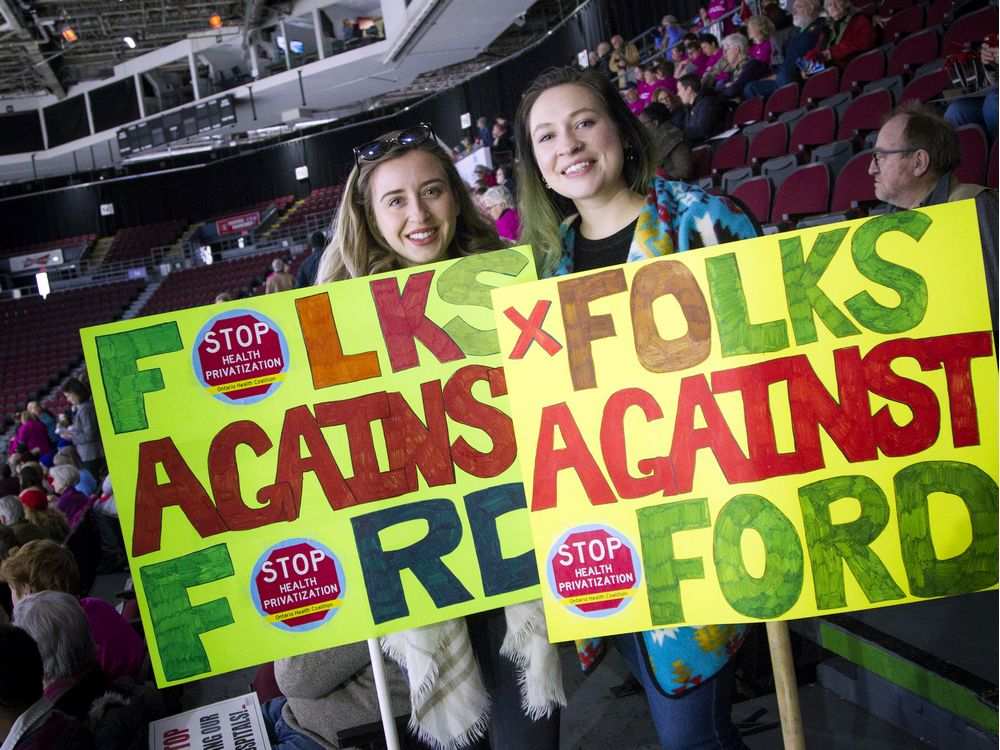 Rachael Moutoussidis, left, an RN at Queensway Carleton Hospital, and Catherine Larocque, an RN at The Ottawa Hospital General Campus, were among those in attendance at Saturday’s event. (Ashley Fraser / Postmedia)

While the province has increased hospital funding, it hasn’t matched the rate of inflation, forcing institutions to do more with less.

“People recognize that money’s a scarce resource these days, especially for services. I think we’ve come to a place where it’s gotten so incredibly bad that people are in this fight-or-flight mode, where if it’s like, ‘If I don’t advocate for myself, I will lose my job,’” Larocque said.

Such advocacy continued from different players in the health care sector throughout Saturday’s rally. One speaker, paramedic Norm Robillard, emphasized problems with offload delays and “Level Zero,” meaning when a paramedic service had no ability to transport patients. “Paramedics are kept hostage in hospital corridors,” Robillard said, making the case for increased funding.

This past week, Ontario teachers and school support staff conducting a one-day strike expressed many of the same concerns about increasing professional demands while resources and compensation lag behind or get cut. A parent of children with autism also spoke Saturday, urging a quicker transition to a needs-based program 10 months after the province announced now-infamous changes to the Ontario Autism Program that would have significantly reduced funding for some families.

“We stand in solidarity with people fighting the education cuts, the autism cuts … all of the cuts,” Mehra said. “We’re suffering from the decline in our public services that benefit everybody.” 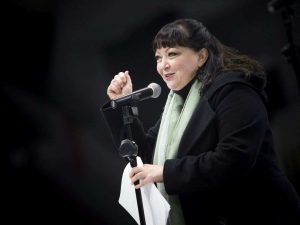 As for where she’d like to see the money come from to reverse cuts and boost funding for services, Mehra said the government had fiscal mechanisms at its disposal and needed to make choices about where it was choosing to spend taxpayer dollars: from government advertising to corporate tax cuts.

“Taxes are the price of civilization, and we’re saying everyone should pay their fair share.”

With files from Joanne Laucius and Elizabeth Payne