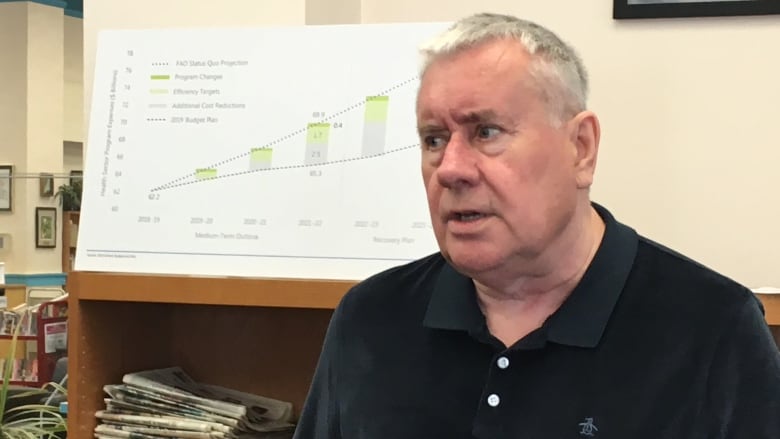 Michael Hurley is the president of the Ontario Council of Hospital Unions. (Matt Prokopchuk / CBC)

The union that represents staff in Ontario’s hospitals is calling on the provincial government to spend more on healthcare over the course of its mandate, arguing that current projections will leave Thunder Bay hospitals short on staffing and available beds as the population ages.

A report released Tuesday morning in Thunder Bay by the Ontario Council of Hospital Unions — a division of CUPE — said that the 1.8 per cent average annual spending increases until 2023-2024, projected in the 2019 budget is insufficient.

The report said the funding, when combined with population trends which show an increasing number of people aged 85 and over along with the actual costs of the healthcare system, means hospitals will not have enough money to adequately deal with health care needs.

That, the union said, will leave hospitals in Thunder Bay short about 80 beds and about 500 staff that will be needed by 2024. Officials also said budget projections will mean the province will cut $5.2 billion in unannounced and unidentified cost savings over the next five years.

“Our hope in doing this, and the campaigning that people like the Ontario Health Coalition do, is that the government will reverse itself on these cuts,” said Michael Hurley, the president of the Ontario Council of Hospital Unions.

“That’s the goal here, is that they will reconsider.”

The Financial Accountability Office of Ontario, in a report released in May, found that “funding for the [health] ministry is entering a new period of restraint,” and that, if the 1.8 per cent average annual increase in spending ($1.1 billion per year) is maintained until 2023-2024, it “would be only the second time in over 40 years that health ministry annual spending growth averaged less than [two] per cent over an extended period.”

The 2018 budget tabled as the former Liberal government was seeking re-election earmarked $2.7 billion more for healthcare over the next two years than what’s projected in the 2019 document, the financial watchdog said.

The Ford government pledged to end “hallway medicine,” or the practice of patients being treated in hospital corridors because there aren’t enough beds. The 2019 budget document said the Tories, last fall, committed $90 million for 1,100 beds and spaces in hospitals and community spaces across Ontario, including at the Thunder Bay Regional Health Sciences Centre and Hogarth Riverview Manor.

In an email to Radio-Canada, a spokesperson for Health Minister Christine Elliott called CUPE’s numbers “unrealistic and misleading,” saying that the regional health sciences centre will see a $10.6 million increase in base funding this year. Further new investments of $144 million for home and community care will “focus on increasing frontline care delivery, such as personal support services, nursing, therapy and other professional services at home and in the community,” the spokesperson added.

A settlement reached with the province’s doctors earlier in 2019 is expected to be the main reason that almost half of the annual average 1.8 per cent funding increases will go to OHIP’s physicians and practitioners program area, the financial accountability office said.

“What’s left leaves hospitals, in particular, well short of their real operating needs,” Hurley said, adding that hospitals need annual spending increases of about four per cent per year, owing to doctors’ salaries, medical technology and the cost of offering drugs in hospital free of charge.

The extent of what he called future cuts to maintain projected spending and where they will happen isn’t yet known, he said.

Personnel that the region can expect to lack in the future includes nurses, lab and other support staff, Hurley said.

The province said $27 billion in spending is earmarked over the next 10 years to create more than 3,000 new hospital beds across Ontario.