Critics say the door to privatization is opening. The government says it is improving public health care. 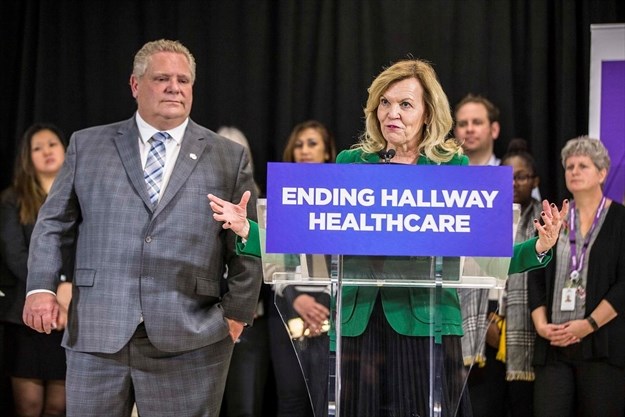 Premier Doug Ford and health minster Christine Elliott have insisted that “privatization” is not part of the government’s long-term plan but health unions are concerned. – Andrew Francis Wallace,Toronto Star

The word is not mentioned in the provincial government policy documents on health-care reform, and it is studiously avoided by Ontario’s health minister.

But the sweeping restructuring of Ontario’s health-care system has that word on the lips of some of the government’s most vocal critics.

“One of our concerns is that, really, this is about creating an institution, which is there to facilitate a market to tender air ambulance services, laboratory services and, we’re afraid, clinical services as well,” said Michael Hurley, president of the Ontario Council of Hospital Unions, a part of the Canadian Union of Public Employees (CUPE).

The massive overhaul of the health-care system in Ontario came into effect June 6 under the Connecting Care Act. The restructuring, announced in February, puts a super agency named Ontario Health in charge of the entire health-care system — from hospitals to community care to organ donation to cancer care.

It will oversee dozens of regional groups, called Ontario Health Teams, made up primarily of health and social service organizations working together to integrate services locally and help area residents navigate the system.

The Ontario Health Coalition predicts the plan will see “chain for-profit companies make bids for the services they see as profitable that they want to take over.”

“When they opened up home care for competitive building, the chain companies very quickly took over virtually all of home care and now control almost all of home care,” said executive director Natalie Mehra. “That is very much what we fear is going to happen here.”

The Registered Nurses’ Association of Ontario (RNAO) points out that no for-profit long-term care home has adopted its best-practice guidelines.

While many think of privatization as patients paying out of pocket, it also includes private companies providing the services paid by OHIP.

“The minister of health continues to pretend that when we talk about privatization, we’re talking about the access to health care through your OHIP card, and that is absolutely not true,” said NDP leader and Hamilton Centre MPP Andrea Horwath. “They have an agenda there to privatize the service delivery side of our health-care system.”

She says the issue with private delivery of publicly funded care is that profit has to be part of the equation.

“It takes our public dollars and it pulls them out of front-line health-care delivery, and it puts them into the pockets of for-profit corporations,” said Horwath. “That’s not what people want done with their health-care dollars.”

Ontario’s Minister of Health and Long-Term Care Christine Elliott doesn’t say “privatization” in her statements about the current changes to health care, claiming the government is enhancing public health care.

“I’ve said that time and time again. Though the official opposition tries to pretend otherwise, that’s not the case,” Elliott said during Question Period on April 8.

In February, Elliott said the government’s priority “has always been and will always been strengthening our publicly funded health-care system and making our system better for patients, families and their caregivers. That means, for the people of Ontario, continuing to use your OHIP card for services as you have always done.”

But the union Unifor says the issue is not about OHIP but about how Ontario’s new health-care system will funnel tax dollars to for-profit clinics, long-term care homes, home-care agencies and other health services delivered by private companies.

“When Minister Elliott said you would still just use your OHIP card for everything, people thought everything is fine,” said regional Unifor director Naureen Rizvi. “We’ve seen what privatization has done to long-term care. When it becomes for-profit, companies make sure they pay low and they do as many cutbacks as they can.”