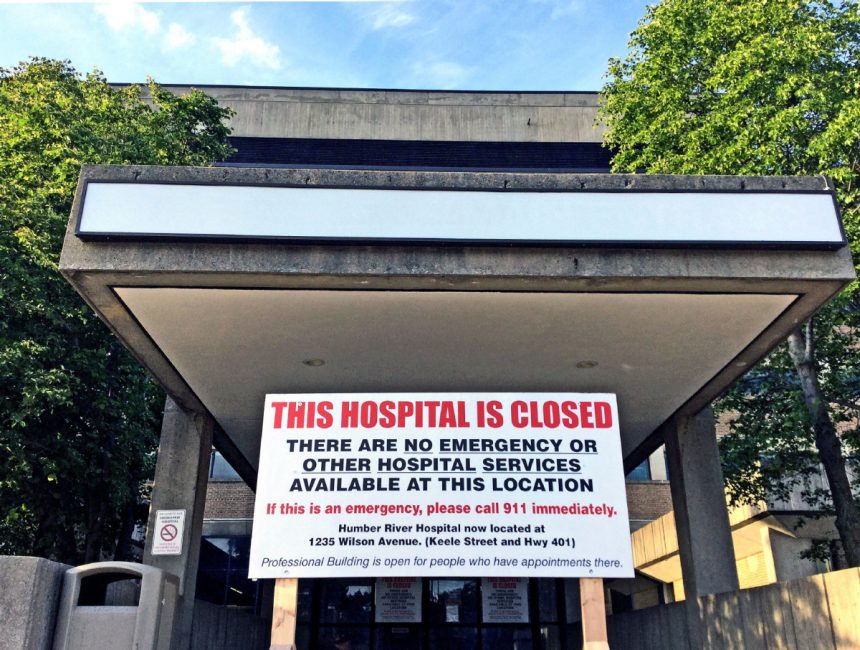 It’s been one year since the parking lot outside the Finch Ave. hospital went from an ambulance hub to a pedestrian shortcut.

At 7:30 a.m. on Friday, commuters cut through the empty lot to reach a bus stop on Oakdale Rd. An hour later, students skirted across to reach Westview Centennial Secondary School. Though it’s been nearly one year since the urgent care centre closed in Jane-Finch, Humber River Hospital (HRH) says it still has no plans for the site’s future.

“It is owned by the hospital, which maintains and secures it,” Gerard Power, Director of Public and Corporate Communications, told the Star in an email on Friday. “No decision has been made on the future use.”

The concrete-and-brick emergency room has sat stagnant since July 2016, along with HRH’s two other sites at Church and Keele Sts. Church and Keele were closed entirely; the Finch site was reduced to select services like CT scans and MRIs. In their place, a new digitized hospital at Keele and Hwy. 401 was erected.

However, the near-idle site at Finch Ave. is a sore reminder of what the community has lost.

In December, hospital security staff — still posted on-site — found 32-year-old Vitaliy Ferynskyy outside the building at 3 a.m., banging on the doors. Ferynskyy had been stabbed, and though paramedics were called to transport him to the nearest trauma centre, he died from his injuries that morning.

Natalie Mehra, executive director of the Ontario Health Coalition, believes that Ferynskyy’s death underlines the vulnerability of the Jane-Finch community, and the necessity of emergent care nearby. “This is a neighbourhood that has higher needs than many others in the city,” she told The Star in an interview.

2017 data from the Central Local Health Integration Network (LHIN) shows the highest rate of high-acuity Emergency Department visits within the North York West sub-region. However, that region contains both the old and new hospital sites, and doesn’t isolate by neighbourhood.

The majority of emergency visits the LHIN documented originate in the Rustic, Beechborough-Greenbrook and Weston areas — which are closer to the new hospital site.

However, Mehra believes the issue goes deeper than visit numbers. The Jane-Finch area contains high percentages of low-income households, who she said may have less mobility than other groups.

“A lot of racialized people were impacted by the closure,” she said. “To close down urgent care in that neighbourhood [requires] everyone to travel a considerable distance, over to a site that’s difficult to access by the 400.”

According to information provided by Power, though, the Urgent Care Centre (UCC) at Finch Ave. was seeing drastically low numbers prior to closure. Since October 2015, the site was seeing an average of 23 patients per day versus the projected 100.

“The hospital adjusted the hours of operations, decreased parking rates on the site to $5.00 per visit, advertised and placed new signage on Finch,” Power wrote. “Despite all of this, the volume of patients attending the UCC actually continued to decrease.”

To the hospital, the cost-per-patient to maintain the Finch emergency room just wasn’t feasible. Power also noted that “over 90 per cent” of patients seen at the Finch UCC during its operation were for issues manageable by a walk-in clinic or family physician’s office.

Directly across the street from the old hospital site, the Norfinch Medical Centre maintains offices for thirteen family physicians, two pediatricians and multiple specialists. Across the east side of the hospital, more physicians and walk-in clinics continue to operate daily.

However, the Jane-Finch community has continued to voice concerns. Since September, the LHIN has partnered with Humber River Hospital and other health providers on a total of 14 facilitated community conversations in the sub-region. A specific priority neighbourhood engagement session was held on Sept. 27 with the Health Care Action Committee of the Jane-Finch Task Group.

While no concrete plan has been set, the LHIN asserts that the issues raised aren’t being dismissed. “This area will continue to be a key area of focus for planning as we look at community health at Jane and Finch going forward.”