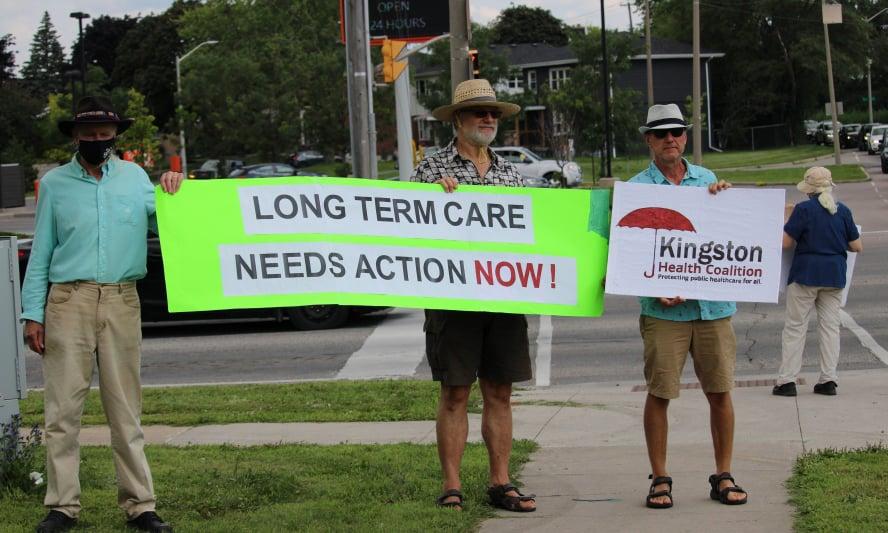 Members of the Kingston Health Coalition hold up signs at the corner of Sir John A. Macdonald Boulevard and Princess Street on Thursday, Jul. 22, 2021. Photo by Penny Cadue.

Last night, in the first and only official provincial leaders’ debate, Ontarians had an opportunity to hear from the four major party leaders ahead of next month’s election. The 90-minute affair touched on a number of topics, including the state of health care in Ontario, with the leaders sparring on issues ranging from hospital wait times to the government’s handling of the COVID-19 pandemic.

While health care featured prominently in the single televised debate, Matthew Gventer of the Kingston Health Coalition said that the leaders failed to break through with meaningful criticism and solutions.

“What I found was they let the government off the hook in many ways about the real impact and strategies of the government, especially privatization,” said Gventer. “They missed some of the most drastic realities for workers and the patients in terms of, for example, home care, and it’s the privatization that’s generated a culture of profit first.”

For Gventer, the issue of privatization in health care is one of the key aspects of this provincial campaign, the urgency of which, he argued, was not properly reflected in last night’s debate. “It didn’t come across … [we weren’t shown] the extent [of the] dangers of the privatization that’s going on in a number of areas.”

The Ford government has recently come under fire for its plans to increase for-profit health care in the province, with the Ontario Health Coalitionindicating that Ontario is set to expand for-profit facilities across Ontario, unloading some of its responsibilities onto private health corporations. While Gventer acknowledges that most opposition parties are putting forward plans to stop increased privatization, such promises were notably absent from the debate.

“All the [opposition] parties’ platforms are reflecting a turn away from for-profit health care, [yet] somehow, that did not play out; it did not show up in a meaningful, caring way,” he reflected on the debate.

Privatization certainly was touched upon, with the three opposition parties criticizing the Progressive Conservatives’ turn towards for-profit medicine. In his opening remarks on health care, Ontario Liberal Leader Steven Del Duca criticized the PCs’ plan to rely on for-profit clinics to help solve the province’s current surgical backlog. “I was shocked back in February when Doug Ford’s hand-picked Health Minister said that his government would actually relieve the surgical and diagnostic backlog … by inviting the private sector, private hospitals,” Del Duca said.

NDP leader Andrew Horwath criticized both Ford and Del Duca for their parties’ histories of promoting privatization policies. “Privatization is not the answer, and New Democrats have always stood against privatization, notwithstanding that both the Liberals and Progressive Conservatives brought privatization to home care and long-term care,” said Horwath.

However, despite several exchanges between the leaders on the issue, no candidate was able to land a major blow regarding Ford’s privatization record, according to Gventer: “The government got off lightly in all of this.”

While he was critical of the opposition’s under-performance regarding privatization, Gventer did praise Del Duca for acknowledging the lessons he learned during the Liberals’ previous reign from 2003 to 2018. “I’ll give credit to the Liberals,” said Gventer. “Del Duca said, ‘I’ve learned something. I’ve learned that I have to start listening to my people,’ and their platform reflects that change, at least to an extent,”

Del Duca’s comments came during a question on the lessons leaders have learned throughout their careers, with the Liberal leader saying, “It can be easy to sort of fall into the trap of doing your best and not necessarily paying close attention. I think that was a really important lesson that I learned through 2018.”

While the health care portion of Monday’s debate did touch on issues related to privatization, the segment also included a lengthy discussion on the government’s handling of the COVID-19 pandemic, including Ford’s treatment of nurses and other front-line workers, as well as his decisions regarding long-term care.

However, as with the privatization debate, Gventer said that the leaders missed out on the opportunity to call out Ford’s record and instead focused on “superficial” matters. “Del Duca’s argument [that] ‘You wouldn’t let kids go to parks’ was a superficial issue in terms of [Ford’s] overall performance,” Gventer said, noting he would have liked to see more discussion on the state of public health care in Ontario as a result of the pandemic.

“The real factor about COVID, which was raised but not adequately raised, is that we’ve undermined, we’ve under-resourced public medical care,” Gventer insisted. “The issue about COVID is the understanding and the under-resourcing of health care right across this province, and so we weren’t adequately prepared … Tying those together did not happen well [in the debate] … I think that context is being lost, and the government is getting off easy on this.”

Ultimately, Gventer believes the opposition parties failed to effectively stand up to Ford and criticize his record on health care over the last four years.

“I worry that this debate did not bring home [how] the government has failed people and the horrors it has perpetrated: not giving sick leave [or] holding companies to account, [and] not providing the direction in terms of PPE and long-term care.”