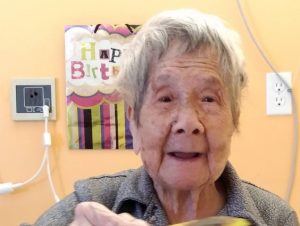 Helen Lee never thought she’d see a repeat of what she experienced during the first wave of COVID-19.

Her 111-year-old grandmother Foon Hay Lum — who became an activist in her 70s — was among the 41% of residents who succumbed to a raging outbreak in Toronto’s Mon Sheong Home in April.

She told me some families lost mom and dad all within one week. And she thought it couldn’t possibly happen again.

But she told a three-hour online call to action Friday — hosted by the Ontario Health Care Coalition and attended by more than 300 people at any one time — she was absolutely “horrified” to learn of the situation at Tendercare Living Centre, where 81 residents have died and 184 tested positive for the virus at Christmas time.

“How could this be happening … eight months later have we learned nothing from wave one?” she asked. “It’s like deja vu.”

She said the “scale and severity” of wave two has made it clear the measures in place are inadequate.

“Ontario has fumbled (yet again) and seniors are paying with their lives,” she said.

Lee said the long-term care system is clearly “broken” and the warehousing and neglect of seniors has added up to the “horrific trampling of basic human rights.”

Throughout the protest — during which advocates and families who either have loved ones in LTC facilities or lost loved ones during the second wave spoke from the heart– the messages were the same.

For all their talk, the Ford government appears to believe seniors are dispensable and the promised iron ring around LTC homes never materialized.

We heard that, yet again, LTC homes, particularly the for-profit ones, were caught flat-footed during the second wave with not enough PPE, or worse, not enough frontline workers — even though they had the entire summer to prepare.

We heard, yet again, there are few inspections of LTC homes under the Ford government and there are no consequences for homes found to be neglectful during both waves of COVID.

Jane Meadus, a longtime lawyer at the Advocacy Centre for the Elderly, said there were no consequences for Southbridge Care Homes, which owns Orchard Villa where 70 residents succumbed to the first wave. In fact, she said they were given 87 new LTC beds by the province.

Meadus said not one LTC home has been charged during this horrible crisis — not even criminal charges for allowing residents to die of malnutrition and dehydration during the two waves of COVID-19.

And she said even though essential visitors should be allowed, some big chains are refusing access to loved ones at a time when residents need love and stimulation.

Vivian Stamatopoulos, an associate professor at Ontario Tech University and a strong advocate for seniors in LTC facilities, said not only has Long-Term Care Minister Merrilee Fullerton been spreading misinformation, but as far as she knows Fullerton has been missing in action.

The minister has not stepped foot in one LTC home during this recent outbreak, Stamatopoulos said, a claim confirmed by her spokesman Krystle Caputo.

Caputo said Fullerton is neither staff, nor an essential caregiver.

However, she said the minister is in “ongoing contact” with LTC homes, health care teams and the hospital partners who are administering care in homes (in massive outbreak).

“She (the minister) remains focused on addressing the challenges facing long-term care right now,” said Caputo. “And (she) must prioritize working with our partners as we act swiftly to address the second wave of the virus.”