LHSC, paramedics plan pilot to offload some patients to chairs, not beds

By:  Jennifer Bieman, The London Press

Southwestern Ontario’s largest hospital and the London-area ambulance service are getting ready to let paramedics drop certain patients off in waiting room chairs when no hospital beds are available. 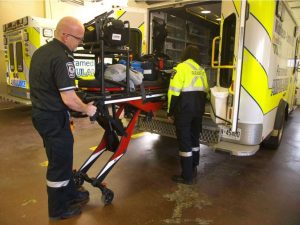 Southwestern Ontario’s largest hospital and the London-area ambulance service are  getting ready to let paramedics drop certain patients off in waiting room chairs when no hospital beds are available.

The pilot project by the Middlesex-London Paramedic Service and the London Health Sciences Centre is meant to stem the chronic problem of offload delays at the city’s emergency rooms, idle hours ambulances spend outside waiting to offload patients when there are no vacant hospital beds.

Under the new protocol, dubbed fit-to-sit, patients deemed well enough to wait in a chair can be dropped off in emergency room waiting areas, freeing up the ambulance crew to attend to other calls.

Ambulance crews are expected to spend no more than 30 minutes each time they drop off a patient at the emergency room. Any extra time is considered an offload delay. The delays typically happen when there are no beds available for incoming patients.

Since the start of 2019, Middlesex-London Paramedic Services ambulances have spent 6,185 hours – the equivalent of a round-the-clock ambulance crew on the road for 257 days – marooned outside hospital emergency rooms waiting to drop off patients.

The two groups are preparing to launch a six-month trial of the fit-to-sit program this fall.

Details of the program have been developed by a working group of representatives from LHSC and the Middlesex-London Paramedic Services.

The group has created criteria paramedics and nurses will use to determine if a patient is able to be offloaded to the waiting room.

The team now is working on an education plan for both paramedics and LHSC nurses.

The concept of offloading eligible patients from ambulances to emergency waiting rooms is not unique to London. Niagara Health and St. Joseph’s Healthcare Hamilton have both adopted similar policies.

But the idea that patients arriving by ambulance could be left to wait in a chair instead of a hospital bed doesn’t sit well with one health care critic.

“This is a disaster waiting to happen,” said Peter Bergmanis, co-chair of the Ontario Health Coalition’s London chapter.

“They are not addressing the real problem which is they do not have enough staff or beds in the hospitals to take care of patients. So, let’s just leave them in a chair?”

Rather than a Band-Aid solution to place patients in chairs instead of beds, LHSC and the Middlesex-London Paramedic Service should be pushing the province for more long-term, sustainable solutions to the emergency room crunch, Bergmanis said.

“They know that this is a stop-gap measure,” he said. “They’re trying to condition us to believe that this is okay now. . . . This just hides the failure of the provincial government.”

The chronic issue of hospital overcrowding – and the bottleneck it causes for ambulances at the emergency room – is a chronic problem at London’s hospitals.

In 2017, the ambulance offload bottleneck in London hit a record high. Ambulances spent 10,728 hours on offload delays – the equivalent to losing a 24-hour ambulance crew for more than 451 days – a 44 per cent increase from 2016.

Last year, the London-area paramedic service experienced offload delays equivalent to a 24-hour ambulance crew being pulled off the road for 381 days.

At times, ambulance crews from neighbouring jurisdictions have been called in to cover for paramedics stuck waiting at emergency rooms.

In the region stretching from Elgin County to Tobermory, including London, the rate of people flocking to hospital emergency rooms for medical conditions better managed elsewhere is nearly triple the Ontario average and second-highest of the province’s 14 health super-agencies.

The province has earmarked $16.1 million provincewide – including nearly $700,000 for London and Middlesex – for dedicated emergency room nurses to care for patients brought by paramedics.

“The ministry’s investment through the dedicated offload nurses program improves access to care by having patients cared for by a hospital nurse rather than by paramedics in the hallway, and improves ambulance offload time, meaning more ambulances are ready to respond to emergencies,” spokesperson Travis Kann said in an email.

The province also is exploring different models of care that would allow paramedics to divert patients in need of non-emergency care to different facilities.

“This would include the proposal from the Middlesex-London Paramedic Services to directly divert select mental health and addictions patients to more appropriate, timely care at a nearby Canadian Mental Health Association Middlesex facility,” Kann said in an email.

“The ministry has also been in discussion with Middlesex-London Paramedic Services about other new models of care. Conversations are ongoing.”