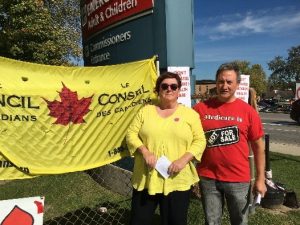 The London Health Coalition and the Council of Canadians are calling out London West Conservative candidate Liz Snelgrove for not attending their debate on health care and for her previous ties to a private clinic.

“We want her to be held accountable, which means she needs to engage in the democratic process of answering questions about positions,” London Health Coalition co-chair Peter Bergmanis told reporters outside London Health Sciences Centre’s Victoria Campus on Friday afternoon.

“This is a position of her party that she needs to address, as well as her own positons within the private health industry, so we need to know would she support private health care.”

The debate in question took place on Sept. 30.

In a statement to 980 CFPL, Snelgrove said she was really disappointed to miss the debate, but she gets invited to many, adding that she felt she needed to focus her time on knocking on as many doors as possible in her riding.

During Tuesday’s debate for London West candidates on 980 CFPL, she addressed her ties to the Advanced Medical Group clinic when asked about the issue by Liberal incumbent Kate Young.

“I am no longer with Advanced Medical Group. I was very proud to be a part of the development of an incredibly innovative model of health care and senior care.”

She added that she fully supports universal health care.

The election is set for Oct. 21, but advanced polls are already open.

Shawna Lewkowitz is running for the NDP in London West, Mary Ann Hodge for the Green Party and Mike McMullen for the People’s Party of Canada.