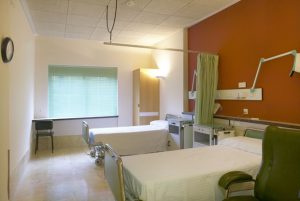 Beds are needed now, as Hamilton and Burlington alone have about 1,900 people waiting for long-term care. – Getty Images/iStockphoto

The Liberal government’s promise of thousands of long-term care beds over the next decade is too little and far too late, say health advocates and policy experts.

“It’s good they are talking about the issues that we’ve been raising for so long as a crisis,” said Natalie Mehra, executive director of the Ontario Health Coalition. “On the other hand, this is years from now and may or may not happen.”

The province plans to open 5,000 new long-term care beds within four years with a total of more than 30,000 beds over the next decade as part of its action plan for seniors announced in Hamilton by Premier Kathleen Wynne on Tuesday.

“That’s a huge increase,” said Michel Grignon, director of the Centre for Health Economics and Policy Analysis at McMaster University. “One bed in a long-term care home costs approximately $50,000, so we are talking about $1.5 billion.”

But the beds are needed now considering Hamilton and Burlington alone have about 1,900 people waiting for long-term care.

“The wait list for long-term care beds (in Ontario) is approximately 30,000, so to solve the problem of the wait lists we would need to build those 30,000 beds now,” said Grignon. “If you ask hospitals, they would like to see more beds in the near future.”

With an election scheduled for June, the Liberals are facing gridlocked hospitals that have more patients than beds before the busy flu season even starts. A big part of the problem is long delays in discharging patients who need other types of care — most often long-term care.

“If all those beds were not occupied and were used as acute care hospital beds the problem would be solved,” said François Béland, co-director of Solidage, a McGill University and Université de Montréal research group on frailty and aging.

So is opening beds the best way to cope with hospital overcrowding and an aging population?

“How much does it cost to have one person in one bed in long-term care?” said Béland. “Now ask yourself, how many home care hours can you deliver (with that) — a lot. But it’s only if you’re willing to organize that level of home care and all of the stuff that goes around it that you can say, ‘We don’t need the beds.’ But if you are not willing to invest in home care then you need those beds.”

A transformation of the home care system is what some health policy experts say is missing from the action plan.

“The solution of last resort should be to build a nursing home,” said Steven Lewis, research consultant and adjunct professor of health policy at Simon Fraser University. “I’m not sure that this plan is essentially saying, ‘We have done everything we possibly can with home care to keep people out of nursing homes.'”

It’s not just about adding more home care hours or money to the budget.

“There are a large number of people who are on nursing home waiting lists because there is no existing alternative,” said Lewis. “Imagine if you pooled the long-term care and home care budgets. My strong suspicion is there would be a lot fewer incentives to put people in nursing homes and a lot more creative thinking about how to keep them out of nursing homes.”

Without a doubt some new long-term care beds are needed and fast.

“There is certainly a growing, legitimate, unavoidable need for nursing home beds,” said Lewis. “The question is how do you minimize the need?”

Béland sums it up by saying: “Do we want to stick to a system where long-term care facilities are the kingpin?”

The Village of Wentworth Heights

The Village of Tansley Woods