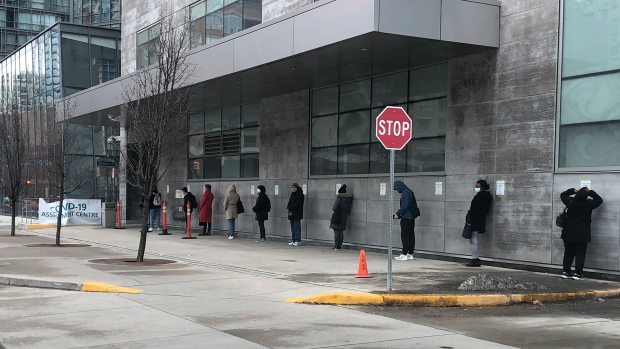 Ontario has conducted far fewer COVID-19 tests per capita than any other province, with half as many tests as Quebec and one-third as many as Alberta.

Speaking about the testing turnaround of more than 3,000 results from Monday to Tuesday morning, Ontario Chief Medical Officer of Health Dr. David Williams said the labs did all the tests they could, or all that they could receive in that time frame.

“They did whatever came in. Was there a delay, was there a drop in demand, I don’t have that information,” he said. “So whatever came in, the external (labs) managed all of those, so they have no backlog, and (Public Health Ontario lab) did their max capacity, and therefore moved the backlog down even further.”

In response to the lag in testing, the province has reached out to hospitals and university laboratories to expand testing capacity beyond the main public health lab in Toronto.

The province has also suspended using tests to confirm when patients have made recoveries; instead using guidance that a patient should be considered recovered 14 days from the onset of symptoms, so long as they were never hospitalized and no longer report suffering any symptoms.

They have also directed that tests be used for those most vulnerable, including healthcare workers and emergency first responders.

But Associate Chief Medical Officer of Health Dr. Barbara Yaffe cautioned that anyone with symptoms outside of those key groups could still get a test.

“Those are not the only people who should be getting testing – bottom line is that it’s a clinical decision by the physician seeing the patient,” she said.

Ontario’s lag in testing goes against the guidance of both the World Health Organization and the nations that have so far kept fatalities at a minimum, such as Singapore, South Korea, Germany and Iceland, in part by conducting widespread testing to detect asymptomatic carriers of the virus.

In Germany officials are testing close to 500,000 people a week.

“Is Ontario still planning to follow the World Health Organization’s advice that underlines the importance of testing and tracking, or has it simply abandoned it?” Natalie Mehra of the Ontario Health Coalition, an umbrella group of healthcare unions, said Tuesday.

Williams said that the plan to increase testing capacity is still on track, and that they may ease the criteria for testing in the future.

“We want to head to 10,000 or 15,000 (tests per day), so we may have some opportunity to do some wider testing perhaps in wider areas to make sure we aren’t missing anything in that regard.”