By: Ian Shalapata, The Square 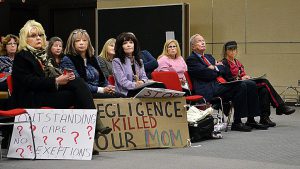 Windsor residents recounted their health care stories at the central branch of the Windsor Public Library during the Ontario Health Coalition provincial tour, on 25 October 2017.
Photo by Ian Shalapata.

(WINDSOR, ON) – There were few empty chairs when the Ontario Health Coalition hosted the Windsor stop on its cross-province tour yesterday afternoon. On the eve of a provincial election, the coalition is gathering health care experiences from residents in order to demonstrate the dire need for reform of the system.

Over the years, health care services have experienced cuts to front line staff and budgets. Many of the stories presented by Windsor residents revolved around the lack of resources needed at local hospitals to properly treat patients. Others brought up the questionable plan to close hospitals and build a single new facility on the outskirts of the city.

One woman recounted how her mother remained in hospital in a filthy state as the doctor didn’t instruct that she be given a shower and nurses were too understaffed to provide it. In another account, a man described his wife’s ordeal when she was admitted for what should have been a 2-day stay.

The woman spent four months in hospital because of recurring infections due to how her procedure was carried out. Meanwhile, hospital administrators provided only lip service to his concerns and recommendations.

The focus of the discussion were the changes needed to protect and improve local public hospital services. The group will produce a report from the tour to provide to all the provincial parties in order to make health care an election issue.