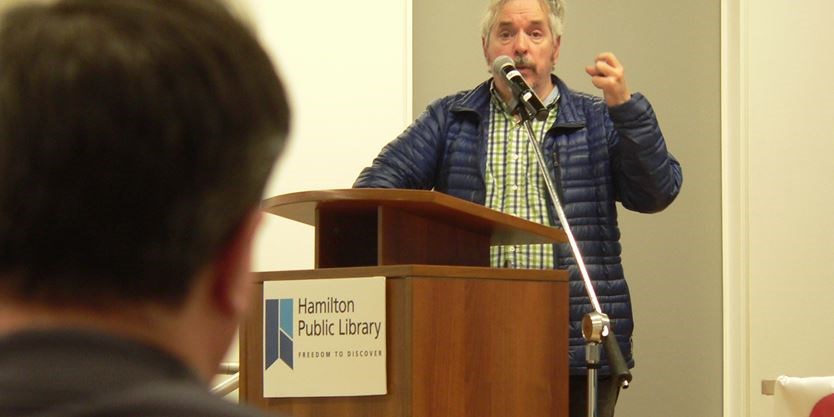 Ontario’s health care workers, unions, residents, and municipal politicians should be preparing for a fight against a plan by Premier Doug Ford and his Progressive Conservative government that will privatize health care and end local control, according to the Ontario Health Coalition.

Doug Allan, a board member of the Ontario Health Coalition, and a health care researcher for CUPE, told about 60 people during what was billed as a town hall meeting March 13 at the Hamilton Central Library, the PC restructuring plan does nothing to improve health care.

“That’s what they are going to do – privatization,” said Allan. “Patient safety and quality of care is secondary to their primary goal.”

He said the Ford government is taking a page from the former Mike Harris PC government when it proposed “restructuring” health care that resulted in hospital closures, no long-term care beds and privatized home care.

Allan said that resulted in a 30,000-person wait list for long-term care facilities, and hallway medicine.

“We need to build up all three aspects of health care (hospital, long-term care, home care),” he said. “This is what they are refusing to do.”

Allan said the government is already rushing to create its “super agency” by quickly eliminating the local health integration networks, creating one board at Bay and Wellesley streets in downtown Toronto to be held in secret.

Health Minister Christine Elliot announced in February the health care transformation, calling for the elimination of “duplicative” management and administrative work. She did not say if jobs would be lost.

During a wide-ranging news conference March 13, Ford said the government will continue to consolidate 14 local health integration networks, and 20 provincial health agencies, including Cancer Care Ontario, eHealth and several other agencies into a new organization called Ontario Health. He said the people who will lose their jobs will be the people at the LHINs, and “CEOs that are making hundreds of thousands of dollars…”

During last year’s election campaign, Ford promised many times not a single job would be lost.

The Ontario health super agency held its first meeting behind closed doors recently. In addition, more than 200 board members of the 20 smaller agencies that are being absorbed by Ontario Health have been let go.

“We have our work cut out for us,” said Allan. “Changing the legislation will not be easy. We are in for a very long struggle to stop the privatization and cuts and restructuring to our health care.”

The Ontario Health Coalition is already encouraging people, especially health care workers, to join an April 30 rally at Queen’s Park to show their opposition to the legislation.  A similar rally attracted about 8,000 people last fall.

The coalition is hoping to at least double that number.

Rolf Gerstenberger, co-chair of the Hamilton Health Coalition, said Ford doesn’t have a mandate to restructure health care, only to eliminate hallway medicine.

But with a majority government, Ford can “ram it down your throats. This is all a scam to privatize and wreck (health care),” he said.

Dave Tremblay said the April 30 rally “should be the start” of the public’s opposition to the Ford government.  “We need to push back harder.”

Malcolm Buchanan, president of the Hamilton, Burlington and Oakville Chapter of the Congress of Union Retirees of Canada, said the public needs to “take direct action.

“We have to make a loud noise against this ideological driven people’s health care legislation.”