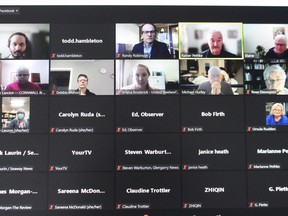 The Cornwall chapter of the Ontario Health Coalition had a Zoom meeting/presentation Wednesday morning and took aim at what it calls the Ontario government’s plans of unprecedented for-profit privatization of health care.

“We call this meeting because there’s overwhelming and accumulating evidence that the government is moving towards privatization,” said Elaine MacDonald, co-chair of the Cornwall chapter. “We’re going to expose it, shine a bright light on it, and stop it in its tracks.”

The presentation, one of many being held this week by health coalitions across the province to warn about what it will mean for local public health-care services, began with a video clip of Ontario Deputy Premier Christine Elliott, the minister of health, making comments earlier in the month about allowing independent health facilities to operate private hospitals.

MacDonald said Elliott had just touched the “third rail of Ontario politics,” but that it was in an under-the-radar way and that no sparks flew. But, she said, that is changing.

“We’re pushing back and will make this the defining issue of the (provincial June election),” MacDonald said, adding that upcoming steps being taken will include a public summit on April 9, and a call to action.

For the Cornwall meeting on Wednesday, a retired local resident, Rainer Pethke, who’s a father, grandfather and caregiver, said “privatization is two-tier health care, let’s not fudge around that.”

Pethke said that if Ontario continues along the privatization path, complex care will be even more difficult outside of large urban areas, and from his personal experiences he believes the existing health-care system is far from perfect, but that privatization will make it worse.

Michael Hurley, CUPE’s Ontario Council of Hospital Unions (OCHU/CUPE) president, spoke during the presentation, and said the Ford government’s announced funding for independent health facilities is a huge concern, and that it’ll result in preferred service for the wealthy, and “the rest of us will queue up in longer and longer lines.”

Hurley said the province has huge capacity and staffing problems, and he added expanding private care must be seen through the prism of the pandemic, during which three-quarters of deaths in long-term care settings in eastern Ontario came in private, for-profit facilities where substandard conditions existed and where there were shoddy efforts at following safety protocols.

Ontario data on COVID-19 related fatalities in long-term care centres within the Eastern Ontario Health Unit isn’t quite the same— the facility with the largest number of fatalities is the municipally owned Residence Prescott-Russell in Hawkesbury, where 16 have died.

Of the related fatalities in long-term care (rounded up as the specific number in those homes with fewer than five deaths isn’t stated), 27 are from facilities owned and operated by Prescott-Russell, the City of Cornwall, or the Mohawk Council of Akwesasne. A further 12 to 32 have been within private, but non-profit facilities. Some 33 to 53 were within for-profit facilities— well off the 75 per cent figure cited by Hurley.

The coalition says the Ford government has announced plans to bring in private for-profit hospitals and are handing more than 18,000 long-term care beds to for-profit companies in 30-year contracts. Despite many repeated announcements, the coalition said, the government has not reinstated comprehensive inspections nor improved care levels.

The coalition said the government is privatizing the few remaining public parts of home care, and that it has allowed private for-profit testing clinics to charge patients hundreds of dollars for COVID-19 tests.