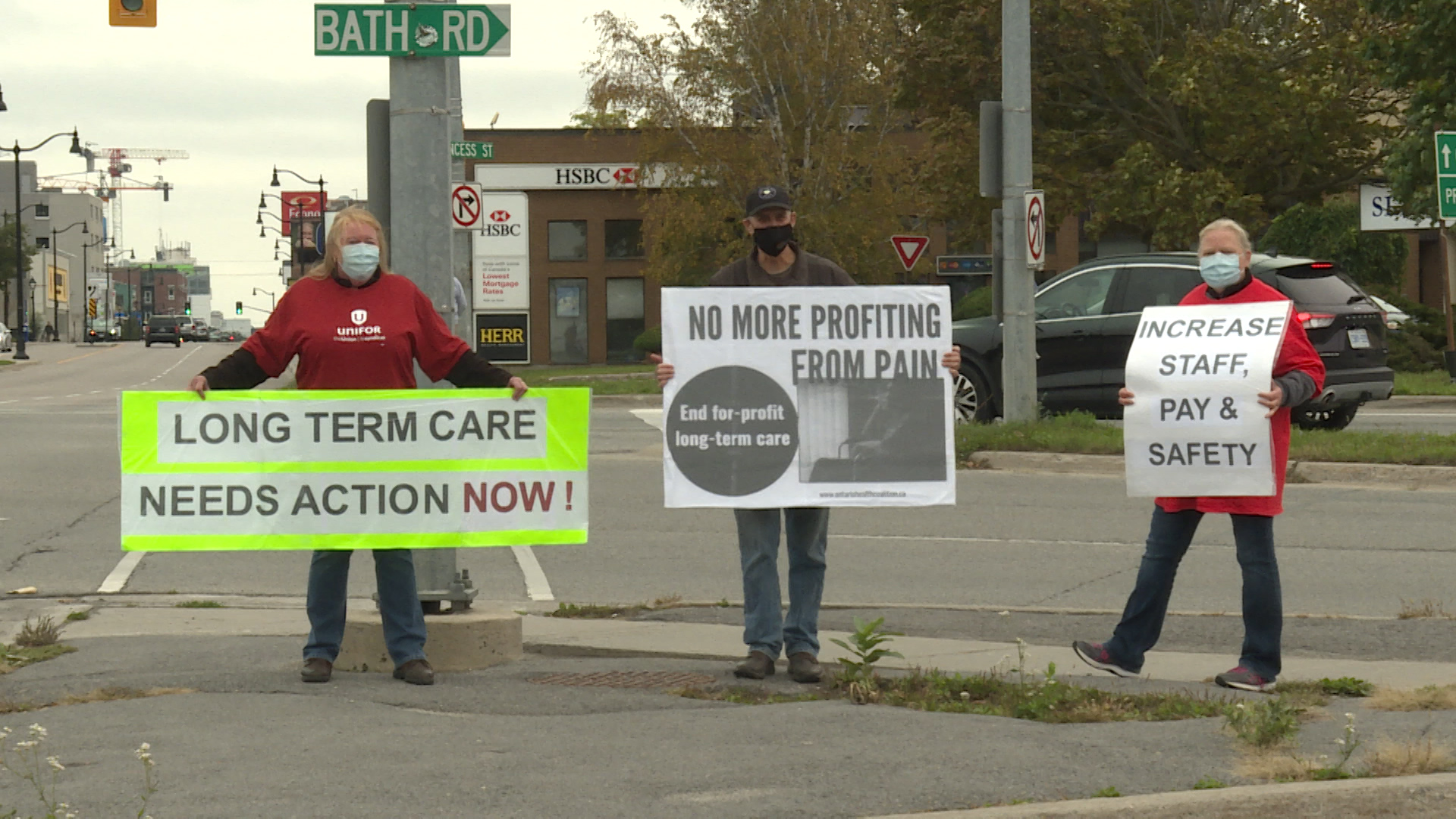 Protestors calling on the provincial government to do more to improve Long Term Care in Ontario. Global Kingston

On the same day as the Ontario government’s throne speech, about 50 protesters set up at the high-density traffic intersection of Princess and Concession streets.

The protest, organized by the Ontario Health Coalition, called on the Doug Ford government to do more for long-term care residents in the province.

The coalition’s board chair, Ross Sutherland, said the protest actions were taking place in at least 20 cities across Ontario.

“Your government is investing $2.68 billion to build 30,000 new and modern long term care home beds in a decade, as thousands more are upgraded to twenty-first century design standards,” Lt.-Gov. Dowdeswell told the provincial parliament in the throne speech.

Sutherland says the money for those beds is going to come at the expense of other sectors of the health-care system.

“We need family doctors, and we need more hospital beds,” Sutherland said. “You can’t just take the money from those other things we need and put it into actually not even enough beds in long-term care.”

The throne speech also included a promise to spend almost $5 billion over four years to hire 27,000 long-term care staff, including nurses and and personal service workers.

“That will provide long-term care home residents with four hours of care per day,” said Lt.-Gov. Dowdeswell during the throne speech.

Fours hours of daily care for long-term care residents has long been a demand of the coalition.

“Four hours of care four years down the road and we’re going to get 15 minutes in the spring. They’re doing nothing, basically,” said Sutherland.

Lt.-Gov. Dowdeswell also said long-term care residents are being neglected no more, stating the Progressive Conservative government will be introducing legislation to address the issue.

“This fall your government will also introduce legislation to protect residents through better accountability enforcement and transparency,” said Lt.-Gov. Dowdeswell.

“They passed a law that says they will be shielded from residents suing them if they provide substandard care,” said Sutherland. “Now people can’t even get the justice they deserve when they get cheated out of the care they need.”

The Ontario Health Coalition has also called for an end to for-profit long-term care facilities and a reinstatement of annual surprise inspections.