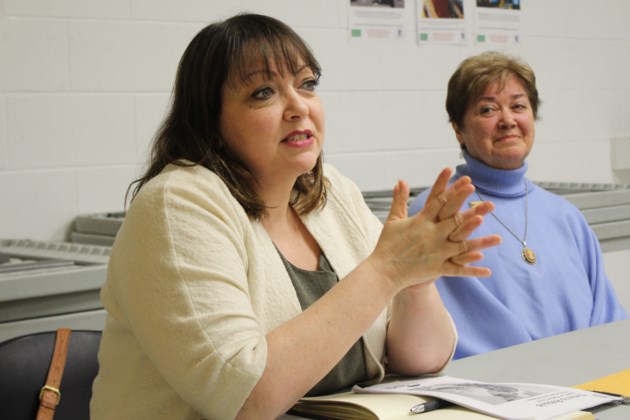 Ontario Health Coalition executive director Natalie Mehra stopped in Sudbury on May 11 to talk about the organization’s platform with a group of Sudburians, including the chair of Sudbury’s health coalition, Dot Klein (right). (Matt Durnan/Sudbury.com)

Health care in Ontario is in a crisis and with a provincial election just weeks away, the Ontario Health Coalition is pushing its platform to start the rebuilding of a system that is teetering close to a tipping point.

Ontario Health Coalition executive director Natalie Mehra stopped in Sudbury on May 11 to talk about the organization’s platform with a group of Sudburians, including the chair of Sudbury’s health coalition, Dot Klein.

Mehra highlighted the crisis that Ontario’s health care system is in, touching on issues like overcrowding, hallway medicine, and ever-growing wait lists for long-term care beds.

“Ontario’s health care has been downsized more than any other province,” said Mehra. “We have the lowest number of beds per person in the country and if you plot us agaist developed countries in the world, Ontario is third from the bottom in the world ahead of only Mexico and Chile.”

Ontario has a total population of 13.8 million. Therefore, a shortfall of one hospital bed per 1,000 people is equivalent to an aggregate shortfall of 13,800 beds to meet the average of other provinces.

Ontario is also at the bottom of the totem pole when it comes to public funding of hospitals per person, at $1,389 per person, compared to an average of $1,929 among all of the other provinces.

“Taking into account both RNs and RPNs, we have the least amount of nursing care per weighted case of any province and the gap between us and the rest of the country is getting wider every year,” said Mehra.

“The evidence is irrefutable, these are the government’s numbers and when you look at it, the picture that it paints is of a system that is in crisis.”

The Ontario Health Coalition has built a platform with two main pillars heading into next month’s election, and are calling on whatever party is elected to give careful consideration to them.

“This isn’t an outlandish recommendation,” said Mehra. “Ontario currently funds its hospitals at the lowest rate in Canada. There is considerable distance to go even to meet the average of the rest of the provinces.”

Secondly, the OHC is calling for 30,000 new long term care beds as soon as possible. With a wait list of 34,000 people and counting who are waiting to for a long-term care bed, Ontario’s current plan is not sufficient, according to Mehra.

“Ontario’s current plan to build 30,000 long-term care spaces over the next 10 years, including 5,000 in the next four years, is inadequate and leaves tens of thousands of people without the care they need,” said Mehra.

The OHC is a non-partisan organization, and will lay out their platform and measure it against that of all three major parties.

On a local level, the Sudbury Health Coalition will act as a conduit for the OHC, informing and educating Sudburians about what the Ontario Health Coalition is seeking, and looking to inform voters ahead of election day.

“We have been around for a while, and we’re revitalizing it now with the election coming up and health care is very much at the forefront of election issues,” said Dot Klein, Sudbury Health Coalition chair.

“We want to educate the public on the issues that the OHC is looking at and help people make informed decisions when they head to the polls.”