About 25 citizens attend the Ontario Health Coalition meeting on integration between PRHC and Ross Memorial Hospital in Lindsay on Thursday September 13, 2018 at the Lions Community Centre in Peterborough, Ont. – Clifford Skarstedt , Examiner 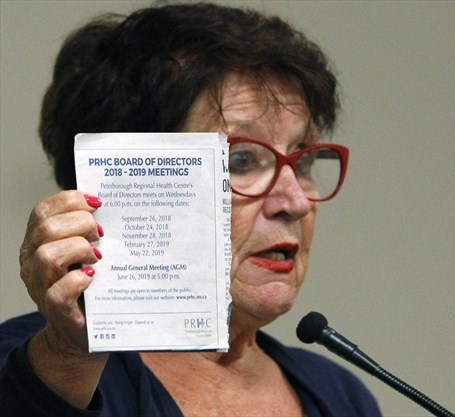 About 25 citizens listen to remarks from chairwoman Charlene Avon of Peterborough Health Coalition during the Ontario Health Coalition meeting on integration between PRHC and Ross Memorial Hospital in Lindsay on Thursday September 13, 2018 at the Lions Community Centre in Peterborough, Ont. – Clifford Skarstedt , Examiner 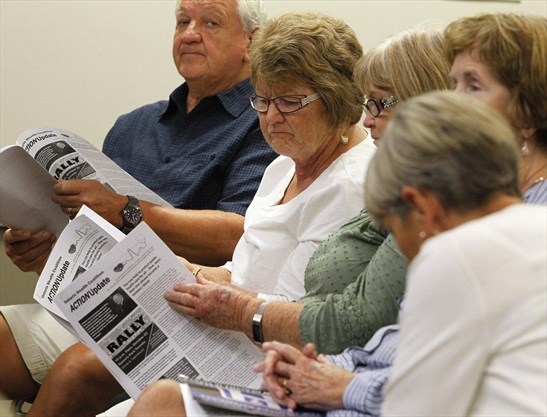 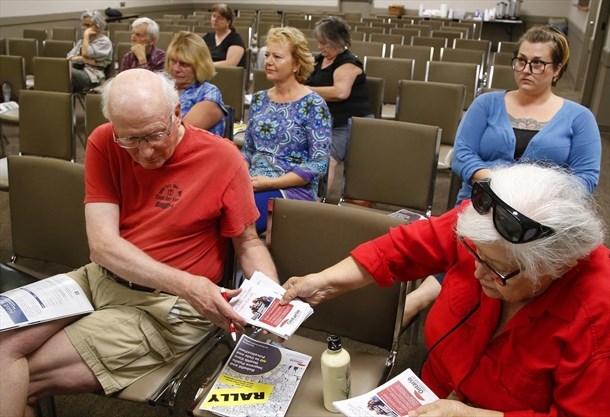 About 25 citizens including Roy Brady, left, pass out pamphlets while attending the Ontario Health Coalition meeting on integration between PRHC and Ross Memorial Hospital in Lindsay on Thursday September 13, 2018 at the Lions Community Centre in Peterborough, Ont. – Clifford Skarstedt , Examiner

The potential amalgamation of hospitals in Peterborough and Lindsay will have a negative impact on patient care, an official from Ontario Health Coalition says.

About 25 citizens attended the meeting, which was held at the Peterborough Lions Community Centre. It was held to let citizens know what the watchdog group thinks will likely to happen if PRHC and the Ross integrate.

Executives at both hospitals have proposed the merger to Central East Local Health Integration Network, which oversees PRHC and the Ross. No one from either hospital was at the meeting.

A final decision has to be approved by both PRHC and RHM boards, the board of directors for the Central East Local Health Integration Network and the Ministry of Health and Long-Term Care.

There’s no word yet on when that decision will come.

Mehra said nothing good can come from the amalgamation – in fact, it’ll hurt communities.

“It’s really the death of the community hospital as we know it,” she said.

When hospitals merge, their services get rationed between the sites to avoid duplication, Mehra said.

That means, patients have to drive from one city to another to get services that were once offered in their community, Mehra said.

OHC works with organizations and community groups to save local hospitals from closure, or to protect services. Mehra has been with the organization for 18 years.

During that time, she said she’s witnessed many amalgamations and they always end up consolidating services to one site.

“This has happened every single place that there has been an amalgamation in Ontario.”

PRHC already has a serious problem, Mehra said. The hospital is already running at 100 per cent capacity most of the time. If PRHC starts treating people from outside the area, that means an even higher volume of patients.

“Nobody from Peterborough benefits from that.”

The plan for services isn’t clear, Mehra said. Hospital executives have remained tight lipped in that regard, she said.

“If they won’t make a clear promise to maintain all the existing services in each town, then people should get very, very concerned indeed.”

And that is the biggest concern for Roy Brady, the chairman of OHC’s Peterborough chapter.

“They could not guarantee that services would not be transferred,” Brady said.

The motivation to blend the hospitals is money, Brady and Mehra said.

But it actually costs more money to amalgamate, Mehra said.

Phone systems and computer systems need to be linked and then there’s the renaming and rebranding. Amalgamations then must be marketed to the public.

“So, the public is paying tax payer money to sell this to themselves – it’s really outrageous. And all that money comes from frontline care, and services,” she said.

So, what does an amalgamation mean for the residents of Peterborough?

Uncertainty, according to Brady, and the threat of services being transferred from one hospital to another.

“Otherwise they’d just have two hospitals. There wouldn’t be any change. So, something has to happen and we’re concerned about that,” he said.