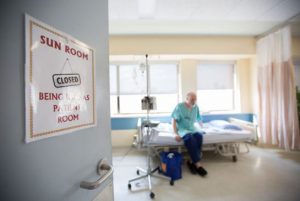 PETER POWER / FOR THE TORONTO STAR Two patients share a room, formerly a sun room, on the fifth floor of Hamilton General Hospital last spring. Many of Ontario’s 143 hospitals were over 100-per-cent capacity last winter.

The Ontario government has come to the rescue of overwhelmed hospitals with more money and beds — just as flu season is starting and pressure on the sector is growing even greater.

The 1,235 new hospital beds are the equivalent of six medium-sized hospitals.

“That will have a tremendous impact,” Hoskins said, noting that hospitals today are accepting more patients who are staying longer, particularly those who are vulnerable and aging.

The Finch site of Humber River is being turned into a 150-bed rehabilitation facility, renamed the Reactivation Care Centre.

Among the services to be provided at the Hillcrest site are some offered by community agencies, aimed at keeping patients out of long-term care and helping them return home, where they would rather be.

Hoskins said some of the new beds will open in as soon as two weeks while all of the initiatives will roll out by the end of the calendar year.

An additional $40 million is being spent on home care to prevent people from being admitted to hospital in the first place and to care for others after they have been discharged.

Much of the announcement is aimed at moving “alternate-level-of-care patients” out of the hospital. They are typically seniors who no longer require acute hospital care and are waiting for long-term care, rehabilitation care or home care.

For example, the ministry is helping to fund 207 affordable housing units for seniors who require additional community supports when after being discharged.

“Today’s announcement of a surge strategy will help address the unusual capacity challenge that hospitals and the wider health-care system is facing, in the short term,” he said, adding that it will allow for greater flexibility in dealing with what is expected to be a tough flu season.

Because Australia has had a worse-than-normal flu season, it is expected that North America will also.

“This winter, ongoing, extremely close collaboration and hospitals, government and the home and community sectors is essential – perhaps more than ever,” Dale continued, echoing Hoskins’s call for Ontarians to get a flu shot.

This past year has been a particularly tough one for hospitals. They were forced to open beds in “unconventional spaces” such as meeting rooms to handle the large volume.

Many of the province’s 143 hospitals were well over 100 per cent full last winter, and for some, the demand has not subsided.

“While it is normal to see an increase in patient volumes in winter months, it is uncommon, if not unheard of, during the summer,” Dale said.

Hoskins’s announcement comes just days after the release of Health Quality Ontario’s annual report, Measuring Up 2017, which highlighted “hospital capacity” as a significant problem in the province.

The organization, which monitors the performance of Ontario’s health system, noted that patients spent on average 90 minutes longer in the ER this past year before being admitted to inpatient beds.

It also warned that wait times are increasing for hip-and-knee replacement surgery.

In question period on Monday, New Democrat MPP Gilles Bisson (Timmins—James Bay) said the government has underfunded hospitals for too long. He accused the government of taking steps now only because there is a crisis and because an election is coming next year.

The Ontario Health Coalition said the government’s plan is only a “temporary band-aid” solution.

Ontario has been cutting hospital beds for decades to the point that it has the fewest beds in Canada per 1,000 population, and among the fewest in the developed world, she said.

The coalition charges that the province is shrinking the publicly funded hospital sector while expanding health-care privatization.

With files by Robert Benzie