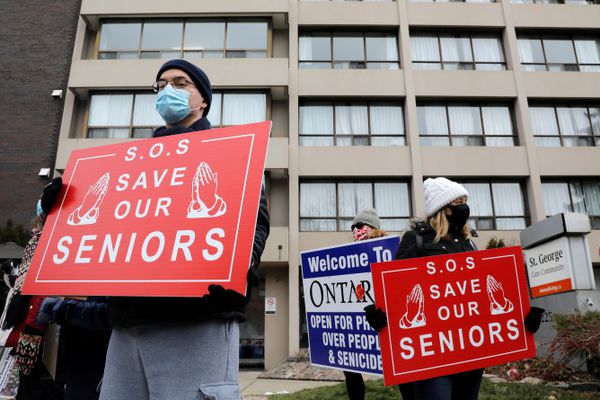 The proposed Ontario legislation includes pledges to spend billions of dollars on hiring more workers for the chronically understaffed sector, doubling the number of inspectors to keep closer watch on conditions in the homes, and building new facilities to replenish the province’s aging stock of homes with multi-bed wards.CHRIS HELGREN/Reuters

The Ontario government would have the power for the first time to fine nursing homes and appoint a supervisor to take control of the most dysfunctional facilities under proposed legislation aimed at holding the sector accountable for the quality of care it provides.

The new fines, ranging from $200,000 for an individual to $1-million for a corporation, are part of a wide-ranging overhaul of the province’s rules governing long-term care. Under proposed legislation introduced in the Ontario Legislature on Thursday, the government pledged to spend billions of dollars on hiring more workers for the chronically understaffed sector, to double the number of inspectors and to build new facilities to replace the aging stock of homes with multibed wards.

The pandemic has laid bare weaknesses in the province’s oversight of the sector, including the decision of Premier Doug Ford’s government to all but eliminate inspections in 2018.

COVID-19 tore through homes in Ontario, killing 3,824 residents. The virus was particularly lethal in older facilities, where many of the residents shared sleeping space and a bathroom with two or three other people.

“The Fixing Long-Term Care Act is a comprehensive rewrite of the rules and the law that will ensure that we protect our seniors and improve the quality of care and quality of life,” Long-Term Care Minister Rod Phillips said in an interview.

The licence of a home could be suspended if its officers and directors are found not competent to operate it in a responsible manner, if they risk the health and safety of residents or provide false statements to the ministry.

The Canadian Armed Forces provided the first set of outside eyes on what was happening in the province’s long-term care sector after the military was deployed to several homes last year. In a report released in May, 2020, the CAF chronicled horrific conditions in five facilities, from poor infection control to abuse of residents.

Mr. Ford promised at the time to put an “iron ring” of protection around people in long-term care homes.

The current Long-Term Care Homes Act contains no provisions for fines against nursing home operators or individuals responsible for running the facilities. In 2017, the Liberal government introduced legislation that contained administrative penalties of $100,000 for infractions of the rules, but Mr. Ford’s government did not proclaim it into law after coming to power in 2018.

Natalie Mehra, executive director of the Ontario Health Coalition, an advocacy group that lobbies for public-health care, said in a statement that the government has failed to hold operators to account for three years.

The Ford government sat on the “hefty fines” its predecessor introduced instead of enacting them, she said.

The legislation would also allow the government to appoint a supervisor to take over the management of a home.

Despite the problems revealed during the pandemic, the government has not used broad powers in existing legislation to replace management at a home or, in extreme cases, seize its operating licence.

Mr. Phillips said in the interview that allowing the government to appoint a supervisor would mean his ministry could take control of a home without revoking its operating licence and closing the facility. Similar legislation exists for hospitals and school boards in Ontario.

The proposed legislation would hand the minister of long-term care new powers to review the decisions of ministry bureaucrats on awarding operating licences, allowing families and others to appeal a decision. Licences for 12,600 long-term care beds are set to expire in 2025.

The ability to review the decisions on licences could be good or bad, depending on how it is used, said Jane Meadus, a lawyer at the Advocacy Centre for the Elderly in Toronto. “It could be positive if it’s used in cases where families and residents aren’t happy where a license is being given,” she said.

The NDP and advocates in the sector have pushed the government to deny a 30-year license extension for Orchard Villa, a nursing home in the Toronto area suburb of Pickering where 70 residents died of COVID-19 last year.

“The government has also listened to some of the concerns from families about the fact of whether that process should be looked at constructively so that there can be an opportunity for appeal,” Mr. Phillips said in the legislature on Thursday.

Mr. Phillips has telegraphed much of what the proposed legislation contains through announcements in recent days. On Tuesday, he said the government plans to strengthen his ministry’s oversight of homes by hiring 193 new inspectors to have 344 in place by next September, roughly one for every two of the province’s 626 nursing homes.

Inspectors would have new powers to issue compliance orders on their own as well as administrative penalties. Currently, their reports must be reviewed by a manager, and their findings are often overruled, said Warren (Smokey) Thomas, president of the Ontario Public Service Employees Union, which represents inspectors.

“It was like putting them through a shredder, because most never saw the light of day,” he said.

The NDP and the Liberals criticized the government for continuing to fund for-profit homes. Mr. Phillips recently announced that the government has awarded 140 of 220 new construction projects to private, for-profit companies, which own 60 per cent of the province’s homes.

“It’s shameful that Doug Ford is continuing to reward for-profit long-term care operators instead of taking the urgent action needed to improve the lives of seniors living in care,” NDP Leader Andrea Horwath said in a statement.

Mr. Phillips said the reality is that Ontario’s system has both for-profit and not-for-profit players. “We’re looking for the best projects,” he said in the interview. “We want to make sure the beds get built.”