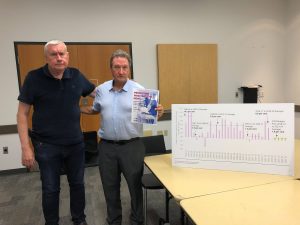 Michael Hurley, left, president for the Ontario Council of Hospital Unions and Canadian Union of Public Employees, and Peter Bergmanis, co-chair of the London Health Coalition.

A new report suggests Ontario has the most underfunded healthcare system in Canada and billions in additional cuts may be required to reach savings targets outlined by the province’s 2019 budget.

Tilted “Protecting What Matters Most,” the report from the Ontario Council of Hospital Unions (OCHU) and the Canadian Union of Public Employees (CUPE) draws on findings from the province’s independent Financial Accountability Office (FAO) and focuses on the Doug Ford government’s 2019 budget with the same name.

At just under $10,000 allotted per person, Ontario currently has the lowest provincial government program spending per capita in Canada. That amount is also more than $2,000 less per person than the national average, the report says.

The report also suggests that the Ontario government will need an additional $5.2 billion in cuts to health care in order to reach savings targets outlined in the 2019 budget by the 2023-2024 year.

During a debriefing of the report in London, Ont., on Thursday, co-chair of the London Health Coalition Peter Bergmanis told reporters the funding shortfalls are the result of a tragedy that’s a been unfolding for quite some time.

“After ten years of austerity with the Liberal government, it was hoping for a breath of fresh air for the government that claims to be for the people,” Bergmanis said.

“Even their promises of more long-term care beds are insufficient. They aren’t going to deal with the growing and aging population need in any of the communities that we’re aware of.”

Other funding shortfalls mean Ontario has 31.2 per cent less inpatient days per 1,000 population compared to the rest of Canada, according to the report.

As for staffing, hospitals across the country, outside of Ontario, are staffed 21 per cent more than the province. The report added that Ontario would need an additional 45,000 more hospital employees in order to reach Canadian staffing levels.

Another shocking find, Bergmanis added, is that Ontario continues to have no guaranteed level of care.

“We’ve been fighting for that in this province for over a generation. Even though the government of the Wynne Liberals had postponed and postponed, the Conservatives had been on board and now suddenly they’re silent on the subject,” Bergmanis said.

The report was released a little more than a week after a public inquiry into Ontario’s long-term care system released its findings.

The inquiry delved into the circumstances that allowed serial killer ex-nurse Elizabeth Wettlaufer’s crimes to go undetected for nearly a decade.

Its findings suggested that a funding shortfall in Ontario, among other systemic vulnerabilities, had helped Wettlaufer escape justice for such a long time.

“It’s shocking to know that (long-term care homes) are the most violent places in our society,” Bergmanis added.

“Wettlaufer is not just an example of it, she’s a symptom of the whole situation that’s happening because of gross underfunding and gross understaffing.”

Bergmanis said a solution can be found in an improved level of funding for provincial health care, something that the London Health Coalition co-chair says Ontario can afford to do.