Ontario’s healthcare system is not for sale 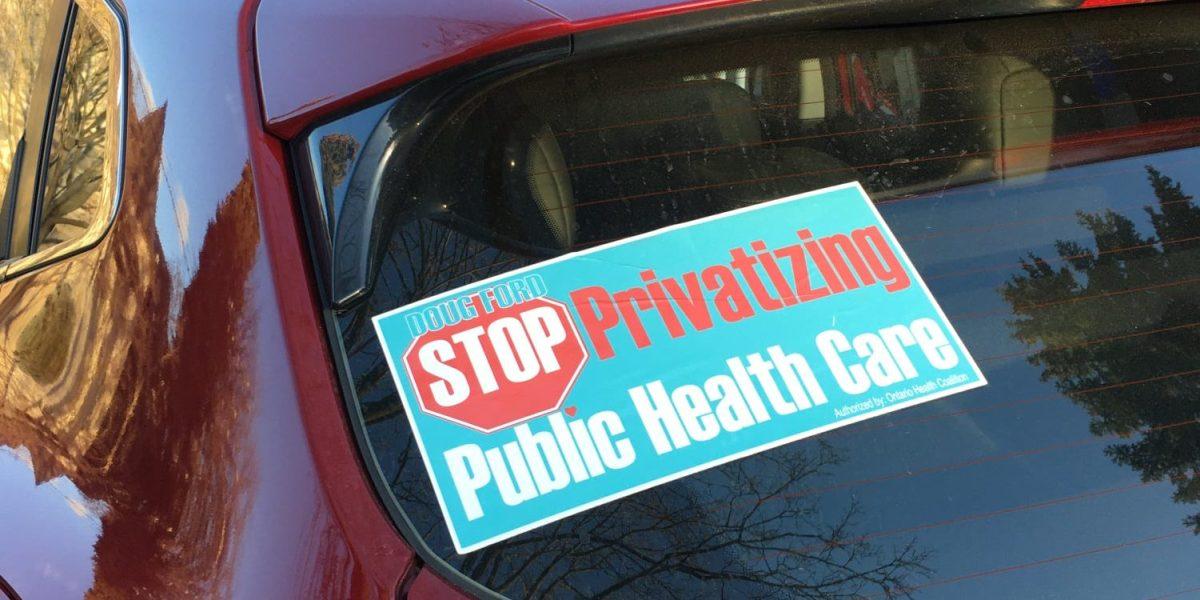 A photo of a car sticker opposing the privatization of healthcare from the Ontario Health Coalition Facebook page.

Who owns the Ontario healthcare system? And, in who’s interest? These are the questions Natalie Mehra wants Ontarians to ask candidates running in the provincial election.

As executive director of Ontario Health Coalition (OHC), Mehra champions the protection and improvement of the public health care system. The five principles of the Canada Health Act direct her work, and these include universality, comprehensiveness, portability, accessibility and public administration.

These pillars are under attack from provincial policy that executes down sizing, reduced funding, and privatization. Currently, 30 per cent of health care has been privatized along with 60 per cent of long-term care (LTC). Should the Ford government get back into office, the austerity and privatization will only worsen.

Decent wages and consistent full-time hours; paid sick days; and workplace protections are missing from the Ford’s agenda for healthcare. According to Decent Work Health Network, a minimum floor of $20 per hour needs to be put in place along with 10 paid sick days. Those paid sick days would increase to 14 paid during a pandemic like COVID. Just cause protection should be put into place to prevent wrongful dismissal, and all workers should have access to a union.

COVID was a stress test

Over 3.4 million Canadians were infected with COVID in the first two years. Over 40,000 Canadians have died so far. In Ontario, 12,842 people have died while 1,400 remain in hospital with 187 in intensive care.

Many of these deaths and hospitalizations could have been avoided had workers had access to decent pay, full-time hours at one facility, paid sick days, personal protective equipment, and tests.

Mehra and her staff of two make available experts in the area of health care, law, policy, finance, as well as advocates with lived experience. These experts inform media, coalition members, and the public through press conferences, summits and videos.

Sandra Caleta’s mother died in a private for-profit LTC home after living there for four years. Caleta, who spoke at the OHC Halton Summit in April, said, “There’s never enough of anything including staff, food, incontinence products and PPE because there is not enough money.”

Lack of support and pay for PSWs

She recalled the home assigning one PSW to look after the needs of 33 residents. She now knows that not-for profit homes have higher staff to resident ratios, fewer people per room and better infection controls.

Caleta went on to say that dividends were still paid to investors despite these deplorable conditions leading to death rates nearly five times higher than not-for profit homes.

For-profit long-term care facilities pay the lowest wages to personal support workers (PSW) who do the majority of resident care. Most PSWs are women. Many are trying to get Canadian citizenship. For-profit employers pay $16 per hour.

Most for-profit homes hire PSWs on a part-time basis. Even though there is enough work to employ full-time PSWs, employers use part-time status to justify denying workers benefits rather than prorating those benefits. This means PSWs have to work at two and three different homes in order to cobble together enough hours to make a full-time job.

To put this in perspective, the top 100 Chief Executive Officers in Canada were paid an average $10.9 million each in 2020. That is 191 times what the average worker in Canada earns.

Not only that, but working at several homes means staff can’t help but cross-contaminate work spaces and expose residents unnecessarily to pathogens.

The average death rates in private, for-profit LTC facilities during COVID was 5.7 per cent. Not-for profit homes had a death rate of 2.8 per cent, while municipal facilities had the lowest rate at 1.4 per cent. Over 60 per cent of COVID deaths in Ontario in 2022 were LTC residents. By spring 2020, 4,000 LTC resident in Ontario had died from COVID.

It’s mind boggling that the Ford government has just issued 30-year licences and expansions for 18,000 additional LTC beds to for-profit corporations with the highest death rates. In fact, many of these for-profit operators had to send in the army to care for dehydrated, malnourished and neglected residents.

When the pandemic hit, Helen Lee’s grandmother was in a not-for-profit LTC home.

“I lost my grandmother, Foon Hay Lum, on April 24, 2020. Her long-term care home was one of the earlier homes that plunged into a horrible COVID outbreak in wave one,” Lee says. “All levels of government were caught unprepared and in the end staffing levels dropped to 20 per cent with 33 COVID deaths and a total of 41 per cent of residents dying,” said Lee via email this week.

She went on to add, “Grandma lived independently in her own house until the age of 107. She was mobile, independent and required no medication. My grandmother’s mobility started to decline about one and a half years into her long-term stay.

Lee’s family story highlights many key issues related to seniors’ health care. Research shows 96 per cent of elders don’t want to be put into institutions. They want to live in homelike settings and be part of their local community.

“We need to strengthen and invest more in publicly administered home care and community care now. The warehousing of seniors must stop,” Lee says.

Mobility of seniors typically declines after entering a nursing home because the setting doesn’t promote or maintain their mobility. Constant staffing shortages means tasks need to be done quickly so residents are transported by wheelchair long before they become immobile.

While many of these issues existed before the pandemic, Lee points out, “The pandemic has shone a light into the horrible situations our seniors have had to endure and substantive changes are needed now.”

The decline of at-home care

At one time, home care allowed seniors to stay in their homes. Unfortunately, the Harris Conservatives began privatizing the public home care system. Then, in July 2020, Ford privatized the last public parts of home care. He plans on re-implementing competitive bidding for contracts which was an abysmal failure under Harris.

Underpaid PSWs working for home care agencies will not be hired on a full-time basis and will not be paid for traveling time or expenses. Nor will they be paid for down time between clients.

Think of it this way, what if we told police officers and firefighters that they would only be paid for time spent fighting crime and fires not for the time they sit around the station?

They’ll have to work for two or three different employers to make a living, and, they will never get benefits even though prorated benefits from each employer should be part of the deal.

Recently, Mehra and her team held a press conference focusing on the premature end to masking mandates implemented by the Ford government.

Both Dr. Dick Zoutman, Infectious Disease specialist who chaired the Ontario SARS Scientific Advisory Committee, and Dr. David Fisman, Professor in the Dalla Lana School of Public Health and an expert in infectious diseases modelling who served on the Ontario COVID-19 Science Table, said masks play an important role in preventing the spread of respiratory diseases.

Masks filter infectious viruses out of the exhaled breath of infected people while also filtering viruses out of the inhaled air of a susceptible person. The doctors agreed N95 and KN95 masks are best, but stated a cloth mask is better than no mask at all.

They went on to say the U.S. Centers for Disease Control and Prevention report a reduction in risk of 83 per cent for people wearing N95 and KN95 masks.

The doctors concluded that masking in schools by students and teachers would reduce the spread of COVID to students’ families.

“Boards of health have a duty to ensure the control of infectious disease and disease prevention. At present none of our 34 boards of health in Ontario is acting to prevent the spread of COVID-19, and public health units and their boards have suggested this responsibility lies with the province of Ontario. This is not so,” Dr. Shelly, who also serves as Director of Health Ethics, Law &Policy (HELP) Lab at Western, says.

The OHC is calling for the Ontario government, the Minister of Health, the Chief Medical Officer of Health or the 34 public Health Units and their Boards to reinstate mask protection across Ontario in order to stop current and future surges of COVID-19.

In other words, OHC is asking those in charge to step up and invoke the precautionary principle – even though a clear threat has been identified and established — rather than sitting back taking a wait and see approach that results in social murder.

So, who really owns health care in Ontario and who’s interests is privatization serving?

The OHC is a non-profit, non-partisan public interest activist coalition representing more than 400 member organizations as well as over 20 provincial chapters with more than 750,000 members.

To hear more about OHCs campaign to make Universal Health Care an election issue, listen to my interview with Natalie Mehra on rabble radio.