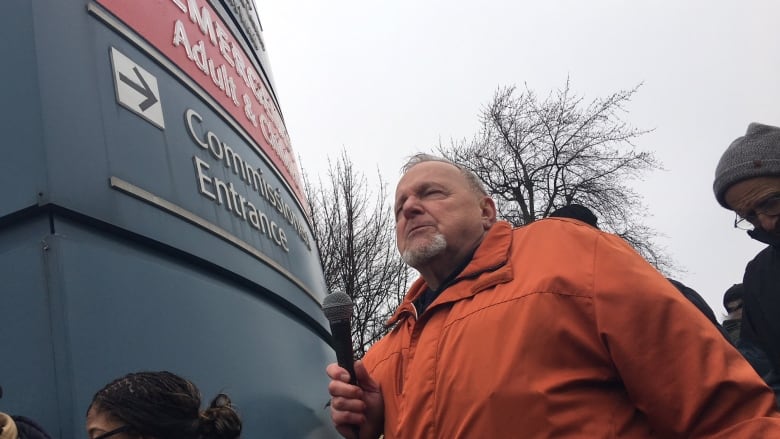 The fight to save the Cardiac Fitness Institute at Victoria Hospital is increasingly drawing attention from Queen’s Park politicians with a June 7 election looming.

A group of patients gathered outside the grounds of Victoria Hospital Friday to oppose a plan to close down CFI, which many credit with saving their lives after they recovered from heart attacks and surgeries.

Roland Lafond was one of a handful of CFI patients who spoke.

Lafond, 78, suffered a heart attack back in 1989. He said the post-operative care he received at CFI “kept me alive.”

CFI provides patients not only a place to exercise, but years of ongoing support and counselling on the fundamentals of heart-healthy diet and fitness.

“You constantly had guidance and camaraderie,” said Lafond. “If you had a question, if you had to figure something out, you had it worked out. Some of the things I learned there, I still do to this day.”

CFI patients spoke passionately about a program that taught them how to change their lifestyle and manage medication so they could stay healthy for years and avoid another heart attack or surgery.

But it wasn’t just patients who showed up. The London branch of the Ontario Health Coalition organized Friday’s news conference and two local MPPs also attended.

If CFI closes, patients recovering from a major cardiac event will be treated at the Rehabilitation and Secondary Prevention (CRSP) program at St. Joseph’s Health Care. But it only provides six months of care while CFI patients can return for care and advice as long as they need it.

She said CFI exceeds the provincial standard of six months of care after a major cardiac event. The program at Victoria Hospital is part of the London Health Sciences Centre (LHSC) network.

“We have a provincial standard,” said Matthews. “This was something that LHSC funded over and above the provincial evidence-based standard. This is a decision LHSC had to make.”

Sattler says six months of care followed by a referral to a private health club isn’t enough for most patients.

She wants CFI to continue to be funded at least until there’s a full analysis that can compare patient outcomes of its care level against the six-month provincial standard.

Yurek said a Progressive Conservative government “would do everything we can” to save the program, which he said is a good example of the benefits, and cost savings, of preventative medicine.

Shortly after it began, hospital security staff said it had to move off hospital property,  forcing the group to walk a few hundred metres to the hospital’s Commissioner’s Road entrance.

Yurek said people taking part in the news conference, many of them seniors, shouldn’t have had to move.

“I think it’s unfortunate [hospital security staff] had to act in that manner, I’m sure they’re being directed by management to do so. But they are patients here … I think given then condition that they’re in and what they’re fighting for, the hospital could have been a little lenient for 25 minutes and given them a chance to voice their opinions.